How is it that the joke that rocked the boys at lunch doesn’t rate a chuckle from the little woman? After trying to crack the mystery for years, Bob’s decided that wit and women just don’t mix

WHEN l WAS six I said to a little girl who lived next door, “1 bet I can stand two inches away from you and you can’t

“By standing behind a door.” I laughed so hard that marbles and chestnuts rolled out of my pants pockets.

The little girl looked at me as if I were a frog. “What’s so funny about that? Nobody could touch you if you were silly enough to stand behind a door.”

I gave up fooling around with women then until I was seventeen. Then one night when I called on a girl named Lorna Gulch to take her to a movie I rolled up my pant legs, creased my hat into a shape like a canoe, pulled my coat down off my

shoulders, brought my front teeth out over my bottom lip, and rang the bell.

When Lorna opened the door Mr. and Mrs. Gulch were standing beside her. The old man took one look at me, let out a great wheezing roar, bent over and whacked his knee, went into a coughing fit and finally said through his tears, “By golly, son, that’s the funniest filing I ever seen. Come in. Come in. You old enough to take a nip of dandelion wine?”

Lorna, in the meantime, looked at my rolled-up pants, then at my hat, then right past me at the autumn night and said, “Do you think I’ll need a topcoat?”

Her mother looked at me: “Something has

Later on I got married. I found out a lot of

things about women, but one thing always threw me, and still does: I haven’t yet been able to figure out a woman’s sense of humor.

Women either laugh at the wrong time or at the wrong joke or they don’t laugh at all while I’m slapping my forehead and howling. I know one quaint little elderly woman who says: “Hmmmm

—then what?” after the joke is over; and another who laughs all the way through the joke until the punch line, then sobers up and asks me where I’m living now.

I’ve found that women either don’t laugh at any dirty joke or they laugh at all dirty jokes, whether they’re funny or not. I’ve seen my best jokes go as flat as if I’d read the instructions from a box of cereal; yet more than once I’ve sneaked in the back way during a bridal shower or afternooi bridge and sat on the cellar steps listening to hysterical feminine laughter from upstairs, burning with curiosity about what they were laughing at, and concluding that the women were all making faces at one another or reading out their husbands’ old love letters.

The whole thing, of course, is that the humor in a joke doesn’t come from the joke itself, but from a lot of mental pictures, ideas, feelings and associations that the joke suggests. A person whose interior atmosphere is made up of mental pictures of new living-room drapes, wall paints, cute little spring suits, permanents, Gregory Peck and halfinch bias tape is sure to see things differently from a person whose psyche evolves around main bearings, lake (rout, eager-eyed little stenographers, prize fights and the income-tax department.

One thing, for instance, that makes a woman an entirely different audience is the fact that she is essentially more practical. She carries around with her a solid ballast of down-to-earth realism that won’t let her bounce very high. This is one reason for the dismal way they react to shaggy-dog stories, which derive their humor from being directly contrary to all normal channels of reasoning.

The first week after our honeymoon I came home fresh from a couple of quick ones with the boys at the office, and as soon as I got in the door I said: “You want to hear a really funny joke, honey? Well, there was a guy, see, and every day he sat in a restaurant with a piece of celery behind his ear. Then one day he put an onion behind his ear, and another guy who had been watching him every day couldn’t stand it any longer so he went over and

you got an onion behind your ear?’ and the guy says, ‘They didn’t have any celery.’ ” The last words I just got out before I collapsed on our only easy chair, wheezing and gasping in helpless mirth.

My wife said, “Why didn’t they have any celery?”

I broke off in the middle of a guffaw. “Well, I mean, the thing is, see this guy always put a piece of celery behind his ear—”

“That reminds me,” my wife said absently. “We’re having Bill and Grace over tonight. We need some cheese.”

For the rest of the evening until our company arrived I didn’t try anything funnier than asking whether my blue suit needed pressing. That night I told the joke to Bill and Grace.

Bill put his head back and let out a great belly laugh. Grace smiled amiably and said, “Celery is so expensive, too,” then turned to my wife and said, “I said to myself just today that if food prices keep going up I’ll have to get a husband that makes more money.”

At this my wife let out a shriek and the two girls went into gales of laughter while Bill and I sat there solemnly sucking olives.

From that time on I tried to figure out a woman’s sense of humor. I tried different kinds of jokes. I kept it up after our two daughters had arrived. It got worse.

A woman doesn’t give herself over to pure play as readily as a man, which is the reason most women can take a drink or leave it alone, whereas most men just take it. A man will hold

up a business conference, sales talk, speech or introduction to tell a joke. A woman will listen to one when the dishes are done and the kids are safe with a sitter and she’s out for the evening. In between she gives only a fraction of her mind to it, which isn’t enough.

I remember one time I told my wife the one about the Englishman whose wife had died. “You want to hear a really funny joke, dear?” I said. “Well, there were two old guys sitting in an English club, see, and one says: ‘Sorry to hear you buried your wife this morning, old boy,’ and the other—here I added a toothy effect that I thought was a pretty good imitation of a Colonel Blimp—the other Englishman said, ‘Yes. Had to. Dead, you know.’ ”

My wife looked at me with the same expression she’d started with. We both looked at one another. My smile felt as if it were falling off my face in chunks.

“What did she die of?” my wife asked.

“Look,” I said, flushing. “One guy says, ‘Sorry to hear you buried your wife—’

“I got that part,” my wife said. “And don’t start shouting. How can I understand a joke when you won’t explain it to me?”

“Just a minute.” My wife reached across the table and fed Mary a couple of spoonfuls of spinach. “Now, what were you saying? Is this the same story?”

I gritted my teeth. “There was a guy—”

“Can I have some more milk?” Jane asked.

“You’re old enough to get it for yourself,” my wife said. Then, turning to me, “That reminds me, you forgot

to put the milk hottles out last night.” “I’M TELLING A JOKLE,” I hollered, pounding the table. “THERE WERE TWO GUYS—”

On the occasions when a woman does give herself over completely to a joke she does it the way she drives a car —all enthusiasm for the objective but little interest in how she gets there. Sometimes my wife laughs as hard as I do at the end, then says something that makes me wonder just what she’s been laughing at.

I remember one time I told her a joke about a connoisseur of rare foods who had tasted every kind of food but poi, and who had taken four months to reach a remote Pacific island by ship, launch, dug-out canoe and pack mule, just to taste a very special kind that was prepared by one of the islanders. When he finally reached the tiny eating place, the proprietor beamed and said: “Sure a-mister. We gotta

What Happened to the Mule?

My wife laughed as hard as I did. When she’d stopped she wiped the tears from her eyes and said, “What did the ot'her man do with.it?”

“What did the other man do with what?”

“What did the man do with the mule?”

There’s another reason why things often go flat when a man tries to make a woman laugh. It’s not the joke that’s wrong, but the fact that a man is telling it. A woman thinks a man is funny most of the time, although she rarely lets him know. I’ve seen women go into hysterics telling one another how their husbands shop, or the way they pamper their cars, or behave with blondes. But to have a man start thinking he’s funny spoils the joke. It’s like children being shown how to act cute, or dogs dressed up like professors. One thing cancels out the other.

The Feet on the Pillow

After seeing some of my best jokes torn to shreds I made the mistake of thinking that something of a more visual, slapstick nature might go over better. I had a party-act at the time that used to have the boys hollering encores. It was an imitation of a certain type of girl playing the piano. It was very funny. At least, it had been while I was single.

The first time I tried it at a party after I was married my wife just sat there looking at me as if she wished there had been marriage schools in her day. She didn’t say anything about it but, from then on, whenever she referred back to the party she always said, “You know, that night you made such an ass of yourself.”

Practical jokes once got me into an awful mess. I lived next door to a chap who told me of a trick he’d pulled on his wife. One night he’d gone to bed a few minutes ahead of her, left the light out and crawled under the sheets with his head at the foot of the bed and his feet on the pillow. The idea fascinated me. I tried it the night after he’d told me about it, and lay there waiting for a startled shriek followed by a burst of appreciative laughter.

My wife didn’t notice that my head wasn’t on the pillow for about five minutes. Then she said: “WHAT on EARTH! . . .”

I sat up at the foot of the bed, grinning from ear to ear, waiting for the full humor of the situation to strike my wife. 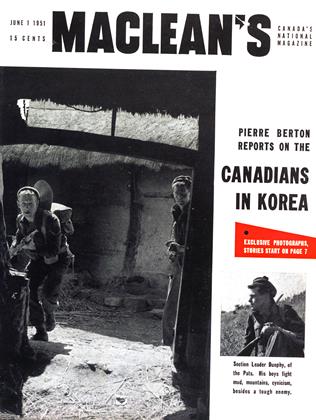