ACE IN THE HOLE: A harsh, violent but vastly engrossing melodrama about a newsman (Kirk Douglas) who restores his own tarnished reputation by secretly prolonging the agony of a man entombed in a cave-in. Billy Wilder, as co-scripter and director, has put his stamp of creative individuality on every foot of this, and the result is a fascinating study of that frightening ogre, the modern mob.

THE BRAVE BULLS: An earnest but

only half-successful attempt to transfer to the screen Tom Lea's fine novel about a bullfighter and his problems. The product is mostly flashy and shallow and—to me sometimes distasteful, too. Mel Ferrer is the torero.

HIGHLY DANGEROUS. This is not, I am afraid, one of the best of the British suspense thrillers, although it has some splendid acting in the supporting roles and one hilarious scene. Margaret Lockwood is far from convincing as an authority on insects who becomes a British secret agent in a police state.

I CAN GET IT FOR YOU WHOLESALE: There is a good share of smart

amusing dialogue in this version of the Weidman novel about a ruthless garment salesman. However, the central character has been changed to a shapely cutie (Susan Hayward), and a wholesome ending has removed most of the acid bite or the original. The good cast includes George Sanders.

comedy from Britain, well worth seeing. A small boy (satisfyingly played by William Fox) quite plausibly gets the idea the entire nation is after him for murder. Psychiatry is given a goodnatured ribbing.

ONLY THE VALIANT: A better-lhan-

average western starring Gregory Peck as a stern cavalry officer who is hated by his men. The Indian raid at the climax is in the authentic tradition and literally a spine-tingler.

SEVEN DAYS TO NOON: Another

superior item from Britain, the central character being a Godfearing but deranged atomic scientist who vanishes with a stolen bomb and threatens to blow up London. A recommendable thriller for adults.

sonates the Great Lover of the Twenties, and Eleanor Parker is tearful and tremulous as one of his many conquests. A corny quasi-biography of a man and an era, partly redeemed by the indisputable fact that Mr. Dexter really does look like his Latin model.

YOU’RE IN THE NAVY NOW: In

spite of some low patches this is a pleasant and very human comedy about the ordeals of non-professional sailors in wartime. Skipper is Gary Cooper.

I'll Get By: Musical Farce. Fair.

No Way Out: Racial drama. Good. 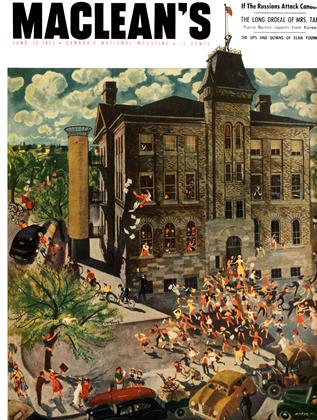