Click to View Article Pages
IN THE Editor's CONFIDENCE

AFTER some days of waiting, Edna Staehler got her summons to be in Donnacona to make the trip to New York in the canal boat (page 18) suddenly. In her hurry to make the sailing time she missed Ronny Jaques, the photographer, and all through the first part of the trip she nervously fingered her own camera, which she had brought along to take pictures just in case she and Ronny and the boat didn’t get together as planned.

All through the first day we received communiqués from her.

“Sorry I couldn’t let you know about the change in departure time,” she told us in a message, concluding unhappily: “I suppose the photographer will never catch up with us now and I’m not sure what kind of pictures I’ll take.” As the boat approached Chambly she set the stops on her camera and bravely signaled: “I’m prepared to do what 1 can with this inadequate camera—if the light is good enough.”

Later she took heart, but not for long when she told us: “I am on deck, the sun is shining, the crew is singing French songs and we had a chocolate layer cake seven inches high at lunch. The boat is moving so slowly now you could walk beside it. Maybe if my pictures don’t turn out we can have a photographer take some on the return journey.”

But the last message read: “Ronnv Jaques has been following us all the way taking pictures. Thank goodness. And 1 thought he was a tourist.”

Just about the time Pierre Berton, our article editor, was tidying up his story on Chinese prisoners ol war in Korea (see page 14) Blair Fraser, our Ottawa editor, was taking oil for Oslo on the first leg of a journey that has included all the Scandinavian countries together with stops at such newsworthy date lines as Belgrade in Yugoslavia and Teheran in Iran. His overseas dispatches will appear in early issues.

REX WOODS, a man who once packed his boyish belongings and left home to run away with the circus, says this cover came right out of his own experience.

At the age of five Woods was an ardent circus buff. After one evening performance he packed a bag and lay down for a few hours’ sleep, and stole out of the house in the early morning. But by the time he reached the fair grounds the circus had gone. 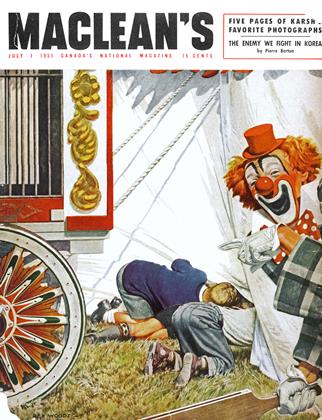