ACE IN THE HOLE: The hero-heel in this cold and brilliant melodrama (Kirk Douglas) is a newsman who deliberately risks the life of a cave-in victim for the sake or advancing his own career. Writer-director Billy Wilder has here given us another memorable film, although the customers who disliked Sunset Boulevard may find this one rather strong medicine, too,

ALONG THE GREAT DIVIDE: The

same Kirk Douglas turns up as a strong silent U. S. marshal in this expensive but disappointing hoss-opera. The dialogue, although evidently meant to be taken seriously, is almost a travesty of all the corny westerns ever made. Walter Brennan, Virginia Mayo and John Agar are also involved.

FOLLOW THE SUN: Somewhat in the vein of 1949's cherishable Stratton Story, but dealing with golf instead of baseball, this is a pleasant and fairly persuasive real-life yarn about champion linksman Ben Hogan (Glenn Ford) and his tussles with disester.

4 STEPS IN THE CLOUDS: An Italian item, produced in 1948 but still a relative newcomer in Canada. Somewhat sluggishly, but with a good deal of unforced humor and humanity, it tells a tale about a middle-aged family man who quixotically poses as the husband of an expectant mother so that her stern parents won't suspect she isn't even married. The mood is lusty, but never leering.

FOURTEEN HOURS: A well-made suspense story about a distressed youth who deeply affects the people of a metropolis by standing all day atop a skyscraper while dozens of good and bad consultants plead with him not to jump. No real film-fan should miss it.

HOUSE ON TELEGRAPH HILL: A fairenough entry in the crowded department

of Murders & Suspense, with the able Richard Basehart as a soft-spoken assassin. Valentina Cortesa, as a Polish refugee trying to take over a dead woman's life in San Francisco, is his principal target.

M: The title, shortest of the season, is an abbreviation of either Murderer or Madman in this earnest, imitative but only partly successful remake of a classic film produced in Germany in 1932. It's about a neurotic fellow (David Wayne) who goes around killing little girls because bis mother made him feel guilty, guilty, guilty.

MOVIE CRAZY: The best episodes in this nineteen-year-old Harold Lloyd comedy are still as hilarious as ever, fully justifying its reissue for presentday audiences.

OUTRAGE: Worthy intentions and an applaudable social message are not enough by themselves to make an interesting motion picture. Example: this

Hollywood parable about a sheltered blossom (Mala Powers) who is raped on the street by a "mental case" who should not have been released from an institution. Slow, dull, and preachy.

RAWHIDE: Some exaggerated nightmarelike close-ups do not prevent this from being a good suspense western. It's about a man, a girl and a baby held captive by runaway killers. Tyrone Power, Susan Hayward, Hugh Marlowe and Dean Jagger are in the competent

SOLDIERS THREE: Carefree horseplay among the sturdy laughing warriors of the British Army in India in the 1 890’s . . . related, rather remotely, to the Rudyard Kipling stories. Stewart Granger, Robert Newton and Cyril Cusack are the somewhat fatiguing heroes, with Walter Pidgeon as their gruff but sterling colonel.

I Can Get It for You Wholesale: Sly, satiric comedy-drama. Fair.

Katie Did It: Comedy. Fair. 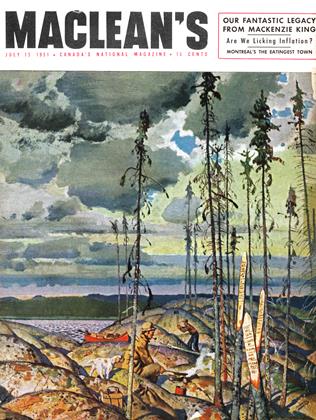