THESE SKETCHES were scribbled into my notebook in the South Korean cities of Suwon, Taegu and Pusan where humanity swirls by in eddies and torrents. As I sketched I was surrounded by dozens of chattering children who peered at my work and made comments in Korean. Two of them are shown at the bottom of the page. When I drew the little girl several small boys shouted “Number One—O-kay !” which meant they liked it.

The soldier at the bottom right is waiting at the Suwon airport for a plane to Taegu. I waited with him and so did the ROK army officer at the top right. We each waited about three hours, which is par for the course.

The old man in the funny hat, bottom left, is the only kind of Korean who doesn’t carry a load. That “birdcage hat” means he’s retired and has a son to support him. Like most Koreans his garments were white (it’s also the color of death) and they were spotlessly clean.

That curious contrivance at the upper left is an A-frame. It’s made from the forks of two branches joined together, and with it a workman can carry a staggering load. It’s the universal carrier in Korea and many a soldier has wished he had one for his own kit. The thing makes a pretty good seat, too, as you can see.

I saw a lot of men sitting down in Korea—as the philosopher at the right—but never any women. In Korea the men seem to use their brains. The women use their heads. Almost all of them carry a bundle on their head and a child on their back, slung in a khaki blanket or a faded mauve quilt which is wrapped about the mother’s midriff and tied tightly with a cord. There just aren’t any baby sitters in the country. In Korea it’s the babies who do the sitting. ★ 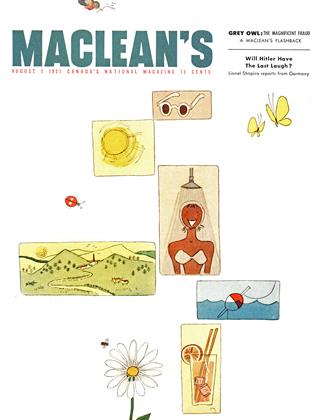