Skirling Over the Stone of Scone Beverley Baxter September 1 1951

Caledonian Society. It was a grand affair. A choir of Scottish lassies sang about the Hebrides and the waste of seas that separate the Scottish exile from his own fair land. Pipers serenaded the haggis when it was brought in triumph to the banquet hall and the chairman gave a glass of neat whisky to the chief piper.

Robert Burns was extolled, Wallace was acclaimed and Bruce got honorable mention. Who would not be a Scot? Hastily I claimed Scottish ancestry on my father’s side, just in case I should be regarded as the descendant of Sassenachs. The place was charged with sentiment and a nostalgic longing for the streams and hills and gorse of Scotland.

When the evening was over a convoy of shining limousines drew up to take the diners to their luxurious homes in Belgrave Square or thereabouts. They were Scots who had conquered London and never had the least intention of ever leaving it.

Last New Year’s day in Canada I went to lunch at the Toronto Club and met an extraordinary number of bank presidents. That is the irony of life: one always meets bank presidents when one does not need a loan. They were all about six foot two and, more or less, their name was McKenzie.

I have recalled these two festive occasions to emphasize the paradox of what is happening in Scotland today. Incredible as it may seem the Scottish home-rule movement has progressed to a point where the socialist and conservative parties will not be able to ignore it. Logic, geography and self-interest

are against it, but it is rousing a fanaticism which rises above these mundane things.

In Canada where there are now eleven parliaments it may seem strange that Great Britain with its fifty million people gets on pretty well with one. Actually there is a secretary of state for Scotland and a lord advocate as well as a solicitor general but they must be members of the British parliament and appointed by the government in power. This is better treatment than Wales is given, for the Welsh have not even a department, much less a secretary of state.

Yet when the Sinn Fein rebellions ended in the partition of Ireland there were two parliaments established in that unhappy island. No wonder the Welsh contend that at least they should have a secretary of state, and an increasing number of Scots believe that they are entitled to a parliament of their own.

Strangely enough the agitation in Scotland was never well organized. The Dukeof Montrose made speeches in all directions, and that famous man of letters, Compton Mackenzie, wrote fiery words on the subject—but when a general election turned up the political machines of the big parties were too powerful. Occasionally a homerule candidate would contest a seat but he was always overwhelmed by the larger issues and the big battalions.

In fact it looked as if the whole idea would perish of malnutrition when suddenly the news was flashed to the four corners of the world that the Stone of Scone had been audaciously stolen from Westminster Abbey. I was abroad at the time and was somewhat embarrassed by the questions put to me. Inexcusable as it must appear I knew very little about the Stone, an ignorance shared by a large

percentage of my fellow inhabitants in England.

Nevertheless my feelings were outraged. Robbing the Abbey is something that just isn’t done, like wearing an old Etonian tie when you have never been nearer to the school than punting at Maidenhead. Yet the audacity of the whole thing seized the imagination and certainly Scotland was in a ferment of excitement.

Within a short space of time Scotland Yard, which has nothing whatever to do with Scotland, knew all about it. But, as you are well aware, the English are apt to fly into a deep calm at any given moment of crisis. Someone in authority whispered: “We must get the Stone back but on no account must we create martyrs.” A shrewd appraisal of the situation, you will admit.

There was no such calm in Scotland. The spirit of Wallace was abroad and there were ardent young patriots ready to shed their blood. However, even the English learn by mistakes and when the Stone was eventually returned to the Abbey there was no police prosecution although the identity and the activities of the conspirators were fully known.

Yet this cold-blooded shrewdness of the English did not subdue the thrill that had shot through Scottish veins. There were extremists who declared that Klodden had been revenged and that this singeing of the King’s beard in London was as good as another Bannockburn. It is true that the Stone was back in the Abbey and that the English were dividing their thoughts among Russia, Persia and the Derby but many Scots believed that when the

fifth meeting of the Scottish National Assembly took place in the summer there would be great crowds and a new determination to carry home rule a long way nearer to realization.

Now I must record a strange thing. At last year’s assembly a thousand delegates turned up. But this summer, in the year of triumph, only two hundred delegates were present at the morning session plus about fifty onlookers. There were a few more in the afternoon but the acreage of empty seats remained in all its nakedness.

There is a partial explanation— but only partial. The Labor Party had banned the whole affair, although one of its MPs, John McGovern, disregarded the ban. The Conservatives were not so drastic but it was understood that they had better take no part in the congress. The Liberals were too busy trying to keep alive, and the Communists are only interested in handing Scotland over to Russia.

Dr. John MacCormick had the difficult task of presiding over the Edinburgh convention and he was soon in hot water over his resolution that a petition should be sent to the King asking for the setting up of a royal commission to make recommendations upon a measure of self-government for Scotland. This was altogether too mild for the gathering and the doctor soon found himself being badgered and denounced from half a dozen quarters.

Then rose a wise man, Dr. John MacDonald, editor of the New Covenanter. “1 support the petition to the King for it is a normal part of the constitutional procedure of this country. The King would refer such a petition to his government and it might be that in handing the petition over His Majesty would add a ‘wee word of advice’ to his ministers. This move-

ment is absolutely opposed to ideas of separation.

With mounting wrath he denounced the extremists who advocated methods that were unconstitutional. “We are not seriously worried,” he said in his rich Scottish voice, “by the antics of these little men.”

Somewhat subdued the meeting went on to suggest that Scotland should consult with the Dominions and, if possible, enlist their sympathy and cooperation. But it was left to Lord Boyd-Orr, the eminent expert on world food production, to whip the meeting to a new enthusiasm.

“I am interested in this movement,” he said, “because I believe in democracy, and if we can get democracy in Scotland I would be prepared to go and fight for democracy in England. I think we should do things very much better in Scotland if we had more power. There is a great danger of everything in this country being Londonized—to use a word I saw in the Scotsman—and 1 hope that 1 will still live to see Scotland free again.”

That, of course, has the authentic ring of the reformer and the patriot. Perhaps it is small wonder that when the resolution petitioning merely for a royal commission was passed there were many cries of “Shame!” from the body of the hall. To the more ardent spirits this was a poor climax to the splendid rescue of the Stone from alien hands. * * *

So far in this article I have tried to do no more than give you an impersonal report on the Scottish home-rule movement. Now, if you will grant me leave, 1 shall make some observations based on my parliamentary experience at Westminster.

I agree completely with Lord BoydOrr that the Londonization of the British Isles has been carried much too far by the socialists.

Another absurdity is that we who are English members have it in our power to carry or defeat any project put forward on behalf of Scotland.

I believe that Scotland should have

a considerable measure of home rule and that to a lesser extent this plan could be extended to Wales. Why should the great mother of parliaments at Westminster debate a Scottish river pollution bill or a hydraulic scheme in the Highlands? This could be much more sensibly done in a Scottish parliament.

Yet when we enumerate the advantages of home rule I wonder if it really fits in with the needs or the character of the Scottish people. Is it not rather absurd to identify the interests of the Scots with their own land whereas they are natural colonists who create little Scotlands wherever they go?

The Scot is never absorbed by another race, no matter where he pitches his tent. Lord McGowan, who was a barefoot boy in Scotland, has lived in London for fifty years but his Scottish brogue or dialect is so rich that he might never have crossed the border. Do you think the Scots in England celebrate St. George’s Day? Away with such nonsense !

The gifts which the Scots bring to the furtherance of civilization are definite, valuable but not limitless. In spite of Burns, the contribution of Scotland to poetry cannot compare with that of England. The genius of the Scot is in the integrity of his outlook, his sense of values, his firm philosophy, his deep-seated reverence for God, and his genius for organization. That is why the combination of the Scots and the English has proved so successful over the centuries.

I think the Scot should regard himself as Scotland and feel that he takes his native country with him wherever he goes. The world is his Empire, not merely the rain-swept Highlands or the banks and braes of the gurgling streams. But if he feels that a Scottish parliament is needed for his country’s dignity and self-expression then I would give it my vote.

Thus shall I be able not only to face my wife but also the ghosts of my ancestors who made their way from Stirling to Canada long long ago. 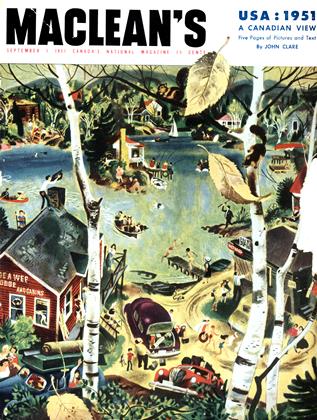