THERE'S BEEN a change of political weather in Quebec. Whatever effect it may have

on the election results there it has certainly made a big difference in Liberal morale.

A few months ago many Ottawa Liberals frankly admitted they had no more hope of ousting Premier Maurice Duplessis than they had, last November, of beating Premier Leslie Frost in Ontario. Today these same Liberals are full of fight. Few go so far as to boast that they can actually turn Duplessis out in 1952, but they’re resolved that if they fail it shall not be for lack of trying.

“I’m expecting the same situation we had in 1935, only in reverse,” said one Liberal MP. In 1935 the Union Nationale, led by Duplessis, came within a few seats of upsetting a Liberal regime which had been in power without interruption since 1900. The Liberal Premier, L. A. Taschereau, was able to hang on for one more year, but the potent Union Nationale opposition exposed so many scandals in the government that Taschereau resigned, his successor called an election, and the Liberals were utterly routed.

But in 1935 the storm warnings were unmistakable. There had been open rebellion in the ranks of the Taschereau Liberals. A group of younger men, fed up with the complacency and corruption of the Old Guard, had broken with the Liberal Party and formed a coalition with the Duplessis Conservatives — the coalition that gave the Union Nationale its name. Duplessis lost no time in getting rid of the leaders of this rebel Liberal group, but it was their help that gave him his start-

This time there has been no comparable split. Superficially, at least, the Duplessis political machine is not only intact, but more powerful than ever. When the autumn session of parliament opened, few Liberals seemed to doubt that Duplessis was still unbeatable. What changed their minds so quickly?

ONE early straw in the wind was a municipal election in Premier Duplessis’ home town, Three Rivers.

Last winter the Duplessis Bridge in Three Rivers collapsed, killing four people. Duplessis instantly cried “sabotage.” Mayor Mongrain, of Three Rivers, publicly ridiculed this explanation and Duplessis was furious. He instructed the local Union Nationale machine to see to it that the impertinent Mongrain he crushed beyond recognition or resurrection at the civic election in the fall.

Liberals as well as the Union Nationale were astounded. It had never occurred to them that. Duplessis couldn’t wreak his will in his own city. Mongrain was a plucky fellow, but, they agreed, a dead duck politically.

Never were prophets so delighted to be proved wrong. The Mongrain victory, unnoticed elsewhere, spread an electrifying shock of triumph and of hope through the ranks of Quebec Liberals. Duplessis had been licked ! It wasn’t impossible after all.

Not long after the Three Rivers election came a Quebec Gallup poll. To the astonishment and the elation of the Liberals, it showed party

in Quebec reversed since the last election. Liberals now had forty-eight, percent of the popular vote, Union Nationale only forty-three percent.

Grit professionals were too smart to conclude that this necessarily meant victory. They knew their main strength lay in the cities, Duplessis’ in the country. In Quebec even more than in other provinces the electoral dice are loaded against the urban voter. By population Quebec is about two thirds urban, one third rural; Quebec provincial seats are more than half rural. As long as Duplessis kept his hold on the farm vote it would take more than a five percent margin to beat him.

But, although victory was anything but certain, at least it was possible. And for a good many Liberals, even that was startling news.

MORE important than either of these indications, was the new attitude of the Quebec Roman Catholic clergy.

In the past the Union Nationale had prided itself on good relations with the church. There had been intervals of strain, like the Asbestos strike in 1949 and the feud with Mgr. Charbonneau, the former Archbishop of Mont real, but in those cases the clergy itself had been divided—Mgr. Charbonneau had bitter enemies among bishops as well as among politicians. In the average Quebec parish the Union Nationale and M. le Curé remained on the best of terms.

There are clear signs now that this is no longer true.

More and more in recent years Quebec Catholic authorities have been disturbed by the open defiance of the liquor laws, the toleration of gambling and prostitution. The rumblings of clerical disapproval have been audible for some time. In November Premier Duplessis was sufficiently alarmed to send a squad of provincial policemen secretly from Quebec City to Montrea’, where they raided some gambling houses which had been operating for years with little interference.

Apparently this action by Duplessis came too late to appease the clergy. The reaction was, “If he can stop the abuses now, why couldn’t he stop them before?” Through November and early December pastoral letters were read in the various dioceses of Quebec and petitions were circulated in all parishes asking for enforcement of the law. The objective was a million signatures.

Among Ottawa Liberals this development has had a double effect. Not only has it raised their hopes in general, it has also increased their respect for the Quebec Liberal leader, Georges Emile Lapalme.

During the summer Liberal scouts had been sending in discouraging reports of Lapalme’s tour of meetings through rural Quebec. He talked too long, they said; people walked out on him. And his reiterated charges of corruption, of graft, of favoritism and nepotism in the Union Nationale didn’t seem to be making much impression.

By fall it was evident that Lapalme’s campaign had made more impression than some people thought.

Before the autumn session of parliament was a month old the new appraisal of Lapalme had borne tangible fruit. Quebec MPs were called into caucus. Hon. Edouard Rinfret, the Postmaster-General, spoke to them very bluntly indeed. The general burden: Lapalme is our man in Quebec and you fellows had better get behind him. If anybody has struck a truce

with the Union Nationale in his own riding now is the time to call it off.

There was some throat-clearing and hemming and hawing among the embarrassed MPs. One of them, whose cosy relations with the local Duplessis man were well known, got up to give thanks for this opportunity to proclaim his devotion to Lapalme and his undying hostility to Duplessism.

Rinfret didn’t mention the name of Prime Minister St. Laurent, but it was pretty clearly understood that the PM was of the same mind. Repeatedly, over the past eighteen months or so, Lapalme had complained to him of half-hearted support from certain federal Liberals. The Prime Minister asked for names; this fall he got some.

Shortly after the caucus the Prime Minister’s younger son, Jean-Paul St. Laurent, spoke to the Young Liberal Association in Montreal. Jean-Paul is a handsome, voluble, impulsive fellow who looks a good bit younger t han his thirty nine years. His speech was a blistering attack on the Duplessis administration and a strong hint that he’d be willing to run as a provincial candidate if they wanted him.

How far the Prime Minister has endorsed his son’s intervention is a moot point. In the last two years the relations between Ottawa and Quebec have become much less hostile, much more co operative, and Prime Minister St. Laurent certainly would not want to revert to the days when co-operation with Quebec was virtually impossible. On the other hand he has been much annoyed by the talk of a “St. Laun ntDuplessis axis” which the recent cooperation has engendered.

Among people who know him well the best guess is that he is not displeased at Jean-Paul’s action but will do little or nothing to encourage him further. Ottawa Liberals know how dangerous it would be to create the impression that St. Laurent wras trying to control provincial affairs. On the other hand they are content to have this open proof that the St. Laurent family is Liberal in Quebec as well as in Ottawa. It’s a big help in stimulating those laggards who still hanker for the comfort of their armistice with Duplessis.

Whether it will be stimulus enough is still an open question. In some rural constituencies the co-operation with the Union Nationale had gone a long way.

One MP explained it: “Personally

I am for Lapalme and always have beenwe are good friends. Some of my organizers are for him too. But there are other organizers who work for me in the federal, and for Duplessis in the provincial. They all stayed away from a Liberal banquet in the riding not longago because I had invited Lapalme. They told me ‘We’re still for you, but we can’t be for him.’

“There’s nothing I can do to prevent this. If I try to crack the whip on these fellows, tell them to choose their sides once and for all, they’ll have to choose Duplessis. The provincial government can do them more favors than I can.”

He estimated that about half the rural MPs of Quebec are in the same position. It’s not that they don’t want to help Lapalme, they say, but they can’t do itnot with the full strength of their federal machines.

In the cities no such collaboration exists, and the cities are the Liberals’ strongest area anyway. In the coming election they have strong hope of taking Quebec’s forty urban seats, even if they have to wait for the next round before recapturing the country. 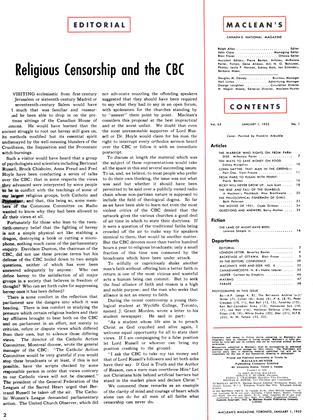