CARRIE: A long and melancholy turn-of-the-century social melodrama, based on a novel by Theodore Dreiser. The author's fickle heroine kept her gaze on the cash register more steadily than the relatively innocent playgirl depicted here by Jennifer Jones. The film, however, is expertly directed by William Wyler, and the skilled cast includes Laurence Olivier in a finely shaded portrayal of a middle-aged man whose passion is his doom.

DOWN AMONG THE SHELTERING PALMS: A few tart or tuneful moments don’t save this one from being, in my opinion, a tedious and second-rate musical. It's about an army captain (glumly played by William Lundigan) who has several women chasing him on a tropical isle.

THE IMPORTANCE OF BEING EARNEST: Oscar Wilde s satirical high-

society comedy of the 1890s is zestfully acted by a polished British cast, in Technicolor. The direction is not always lively but Wilde's sparkling dialogue helps to make this one practically a “must for sophisticated customers.

KING KONG: The famous 1933 fantasy-adventure has been reissued and is one of the most entertaining shows now making the rounds. I’m not at all sure that all the laughter it now generates was originally intended by the producers, but in any event it adds up to a lot of laughs for the whole family. The hero, of course, is a prehistoric super-ape who terrorizes Manhattan, but all the time he’s ¡ust eating his heart out for Fay Wray.

PAULA: Sudsy in format like the radio daytime serials, but quite decently done, this is a neatly plotted tearjerker about a childless woman (Loretta Young) who adopts a little boy after she almost kills him in a traffic accident. Meanwhile, the police are hunting her as a hit-and-run monster.

shocking export from Japan. A woman

is ravished and her husband killed by a bandit on the road, then we are given a choice of several different versions of what really happened. It’s an item for connoisseurs.

SALLY AND SAINT ANNE: A charming Irish-American girl (Ann Blyth) uses her special drag with her favorite saint to keep her friends and her screwball family out of trouble. Much of these shenanigans look like a belated Celtic rewrite of You Can't Take It With You, but it has some honest hilarity in it just the same.

THE SAN FRANCISCO STORY: The

plot and characters are awfully hackneyed, but director Robert Parrish has crisply and graphically put on film a story about crooked politics and violence in the California of a century ago. Even he, I'm afraid, can t put much conviction into Yvonne DeCarlo's dull sketch of a good bad-girl.

SCARAMOUCHE: An energetic costumed swashbuckler, or sword-opera, adapted from the Sabatini novel. Stewart Granger and Mel Ferrer are the taunting duelists, and Janet Leigh and Eleanor Parker are among the ladies who raise their temperatures.

SON OF PALEFACE: I happen to be a member of the group—a minority, it would seem—which does net consider this Bob Hope farce as funny as its 1948 predecessor, The Paleface. But the clowning is certainly fast and genial, and Jane Russell is a wondrous sight to see as *he lawless hostess of the Dirty Shame Saloon. Also on hand: cowboy Roy Rogers and Trigger.

WERE NOT MARRIED: Five separate stories are wrapped up in this one, and some of them don t click. It s worth seeing, though, if only to enjoy Fred Ailen and Ginger Rogers as professional lovey-doveys who never stop snarling until the exact second when their breakfast program again hits a million radios like a plague of locusts.

Has Anybody Seen My Gal?: Domestic comedy of 1920s. Good.

I Believe in You: British comedy-drama.

Jumping Jacks: Good for Martin and

The Lion and the Horse: Outaoor ac-

Lovely to Look At: Musical. Fair.

World in His Arms. Adventure. Fair. 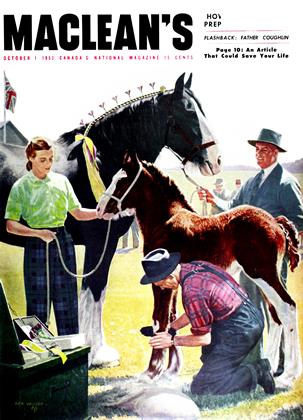