AS BRITISH COLUMBIA’S Social Credit Government entered its fifth month of office nobody, least of all this reporter, knew how long it was going to last. But all parties in B. C. knew they were in the middle of one of the damndest poker games in the history of Canadian politics.

When they were swept out of office but left with the balance of power, the Lil>erals decided to support the Social Credit Government for at least one session. There was no altruism in this decision. B. C. Liberals t>elieved that if a quick election were called Social Credit would take thirty-five of the fortyeight seats. They were resigned to seeing the CCF take the rest, with the Literals and Conservatives wiped

Presumably it looked about the same to Social Credit leaders. Why then didn’t Premier W. A. C. Bennett call an election right away?

He didn’t dare ask for one, that’s why. The federal election of 1926 established the right of a prime minister to get a dissolution any time, once he has proved his ability to govern in the first place. See Bruce Hutchison’s article. How Mackenzie

King Won His Greatest Gamble, page 16.) But Premier Bennett’s Government, particularly at the outset, looked so shaky he was at first extremely reluctant to risk its balance on the constitutional tightrope. Social Credit had nineteen seats, the CCF eighteen. Neither had a majority; each had an equally plausible chance of forming a government which the legislature would support.

If Premier Bennett had asked Lieutenant - Governor Clarence Wallace for a dissolution of the legislature and a new election in those first uncertain weeks of office, he might merely have found himself dismissed in favor of CCP leader Harold

This was no speculative possibility, either. Premier Bennett made no direct approach to the LieutenantGovernor, so far as is known, but Social Creditors did put out unofficial feelers to find out whether they could get a new election if they should ask for one. The replies they got were not encouraging.

Actually some Liberals would as soon support a CCF government as a Social Credit one. Some of them were advocating, last summer, a public statement that they were willing to back a CCF government; this would have put Harold Winch into office instead of Cecil Bennett. What deterred them, besides a personal dislike of Winch, was the fear that the CCF might find enough ex|>erienced Continued on page 53

people to give B. C. a pretty good government.

Social Credit is one hundred percent inexperienced. Only two of its members have been in the legislature before, and none has ever held office. Liberals considered them exceptionally qualified to muck things up. The MLAs are a conglomeration of unknowns, even to each other, and Literals hoped they might prove inept enough to lose the public’s confidence. Then the one-third of B. C. electors who voted Liberal even last June might be swelled again into an adequate near-majoritv.

Much as they admire General Dwight 1). Eisenhower personally, most officials of the Canadian government hope Adlai Stevenson wins the L'nited States election

For one thing, strange as it may seem, they know Stevenson better. Eisenhower, to most of them, is the same genial but remote figure that he is to most civilians. Stevenson, to many of them, is a fellow worker and friend.

Stevenson was at the San Francisco conference that set up the United Nations, for example. Later he represented his country at various UN meetings, and he was LL S. Ministerin London for a while.

Among the Canadians who regard Stevenson with real personal warmth are L. B. Pearson. Minister of External Affairs: Dana Wilgress, Pearson’s deputy; Paul Martin. Minister of Health and Welfare.

A vear or so ago Stevenson, then Governor of Illinois spent a day with the Paul Martins in Windsor, Ont. They were talking American politics in a random sort of way and Martin said “Why don’t you run for president yourself?”

"Me? I wouldn’t have a chance ” Stevenson replied. Martin thought no more of it at the time but he remembered the conversation when the "reluctant candidate” was drafted last spring.

Bv contrast no Canadian outside the army has had a chance to know Eisenhower really well. A few civilians including Brooke Claxton. Minister of National Defense, have had occasional informal contacts with him and they liked him. as practically everyone seems to do. but even they formed no clear impression of what he’d be like in the White House.

Aside from personal attachments, they like Democrats better than Republicans for policy reasons. The last Republican administration is test remembered here for a ruinous tariff law which successive Democratic administrations have done their best to wîi it t Ic away. Moreover. External \ffairs people think the Democratic administration’s own appraisal of the international situation has been consistently sound and wise. American mistakes, or what Ottawa regards as such, have mostly been made under Republican prodding and pounding.

The outstanding example.of course.is Formosa and t he Uhina policy generally. When President Truman announced the “police action" in Korea two and a half years ago you may remember, he coupled it with the announcement that Formosa was to be protected by the U. S Seventh Fleet. In Ottawa's opinion this was a terrible mistake. Other Western nations were willing to back the U.S. stand in Korea, but they were certainly not willing to back Chiang Kai-shek in Formosa.

Canada lodged a protest immediately private but vigorous. The answer was in these words: “We had to do it because of the Republicans ”

In many other less prominent ways. Republicans have appeared to Canadian eyes as the villains of the piece. External Affairs people have a low opinion of John Foster Dulles, who might be secretary of state in a Republican cabinet. They have even lower opinions of some other Republicans who would expect, and might get, key jobs from an Eisenhower regime.

"I bet five dollars on Eisenhower,”

one official confided recently. “That was before the conventions, when I thought there’d be nobody with a chance of beating him. But I think maybe my subconscious reason for betting on him was to give me something to be happy about, no matter which way the election went.”

at the jingling machine and says “Wrong number.” Then he picks up the receiver, listens for a minute, says "You’ve got the wrong number,” and hangs up.

How does he know? Because the telephone is a private line with an unlisted number. Turnbull uses it for calling out when his listed line is clogged with incoming calls, as it

“I could make a lot of money betting on those wrong numbers,” Turnbull says, "but for some reason I can’t get anybody to bet.” it 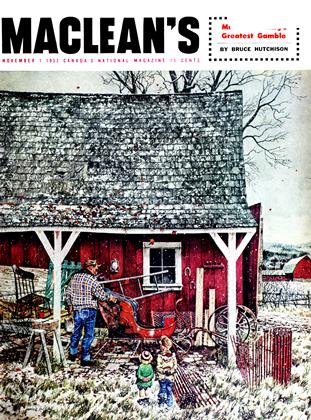