Retire at Twenty—There seems to be only one sure way for everybody to be happy: Just let the old and the young change places.—Chatham (Ont.) News.

The Knowing Nose — Add another use for the nose, apart from breathing through it and sticking it in other people’s business: everyone can now pay t hrough it.—Moose Jaw (Sask.) Times Herald.

Memory Lingers On—One of the chief reasons parents w’orry about their children is that they were children themselves once.—Oshawa (Ont.) Times Gazette.

Complete Cure—Snipped from a patent medicine testimonial: “Since

taking your tablets I am another woman. My husband is delighted.”

Mary had a little lamb A very small thin slice.

That was all she could afford At the prevailing price.

All’s Fair—Experts announce that we will be ready for war by 1954. The other side will please note that starting something before then will be considered cheating.—Calgary Herald.

Razor Wit— A fellow was shaving in the open air. A friend came by and enquired: “Do you always shave outside?”

“Of course,” the shaver said. “Do you think I’m fur-lined?”—Grimsby (Ont.) Independent.

He Asked For It—“I want to tell you, sir, that I’m engaged to your daughter.”

“Well, don’t tell me your troubles. What else did you expect after hanging around the house every night for months?”—The Albertan, Calgary.

Rum Ration — A minister, addressing a women’s missionary meeting, said that “thousands of gallons of rum go into Africa for every missionary who is sent there.” One of the sisters whispered to her neighbor: “Rather a large allowance for

those missionaries, don’t you think?”

Deep Are the Roots—Three-yearold Sally was helping her father weed the garden. She grabbed an extremely large weed, pulled for several minutes and out it came.

“My,” said her father, “you must be pretty strong to pull out such a big weed.”

“Yes,” agreed Sally. “Don’t forget the whole world was pulling on the other end.”—Halifax Mail Star.

And They Call Her Lady—Luck is what happens when preparation meets opportunity.—Chatham (Ont.) News. 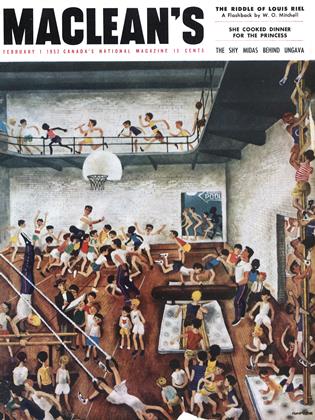