The Morning After—You are as

old as you feel before breakfast, says a medical authority. We would not have believed it possible for any human being to be that old.—Oshawa (Ont.) Times Gazette.

Spectrum Saga—Life is certainly colorful. We are either trying to get out of the red or get rid of the blues. —The Albertan, Calgary.

Spoil Sport—A doctor says it’s healthier to kiss a girl on her photograph. But you get a negative reaction.—St. Thomas (Ont.) Times Journal.

Where it Hurts—Posing a farmer and his college-boy son for a formal picture the photographer suggested that the boy stand with his hand on his father’s shoulder. “If you want to make it look natural,” said the father, “ask him to put his hand in my pocket.” News Chronicle, Port Arthur, Ont.

Neighbor; She should put a piece of steak on it.

Child: If there was any steak in

the house she wouldn’t have the black eye.Evening Reporter, Galt, Ont.

The Long Wind — “Friends,” orated the politician, “I know I’ve been a little lengthy tonight, but I am speaking to posterity.”—“Yeah,”

interjected a weary listener, “and if you don’t hurry up they’ll hear you.” — Hanover (Ont.) Post.

Rear View-Pott: What has lots of legs, green eyes and a yellow back with black spots?

Pott: I don’t know either, but it’s on the back of your neck.—Canadian Observer, Sarnia, Ont.

Beg Pardon —An austere-looking man was traveling in a train and a fellow passenger spoke to him.

“Excuse me, hut your tie is hanging out.”

“What of it?” the man answered. “Your pocket has been on tíre for the last five minutes but I haven’t bothered you.” — Welland Evening Tribune.

“Si, I’ve got a mule with distemper. What’d ye give that one of yours when he had it?”

A week later they met again. “Say, Si, I gave my mule turpentine and it killed him.”

“Killed mine, too!” —Calgary Albertan.

Last Laugh—According to a college professor a man’s laugh reveals his character. Especially if he has heard the joke before—North Bay Nugget. 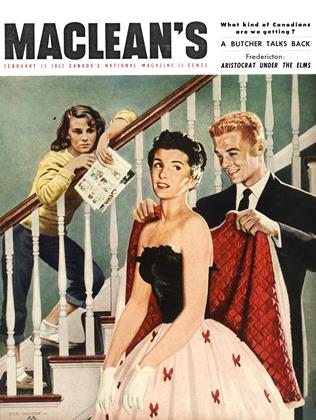