BEND OF THE RIVER: There are, of course, customers who loftily ignore all westerns, and that's their privilege under the ticket buyer's Bill of Rights. But for Those less confined in their selections this Technicolor job is heartily endorsed as one of the best in Hollywood’s recent spate of big outdoor dramas. James Stewart, Arthur Kennedy and the wild grandeur of Oregon are among the admirable ingredients.

DEATH OF A SALESMAN: Arthur

Miller's wise and compassionate tragedy has retained some, but by no means all, of its original power in its transfer from stage to screen. I find a disconcerting staginess — a hamminess, almost — in Fredric March's portrayal of the doomed self-defeating Willy Loman. Mildred Dunnock is superb as his understanding wife, and the same applies to Kevin McCarthy and Cameron Mitchell as Willy's deluded sons.

IVORY HUNTER: As a sort of well-bred British answer to King Solomon's Mines, this made-in-Africa jungle adventure has a pleasant style and some topnotch camera work, helping to atone for an almost complete absence of narrative suspense.

THE LIGHT TOUCH: Art thieves in the cathedral . . . and the result is an occasionally witty “crook comedy." It has a surface glitter that fails to conceal entirely the banality of its threadbare plot, the one about the heartless scoundrel who is reformed by the love of a pure woman. With Stewart Granger, Pier Angeli, George Sanders.

THE MAN IN THE WHITE SUIT: Alec Guinness os the persecuted inventor of a perpetual dirt-proof fabric. The turmoil he causes in the clothing industry is amusingly set forth in this ingenious British comedy.

THE MAN WITH MY FACE: Maybe I'm wrong, but I can't swallow the idea that even a man's wife could be deceived—completely deceived, that is —-by a ruthless killer who closely resembles him. It happens here, with

ON THE LOOSE: Neglectful parents get a well-earned roasting in this family drama. Its sudden happy ending is none too convincing, but the story has some honestly compelling moments. Joan Evans is a teen-ager who runs wild, with Lynn Bari and Melvyn Douglas her mother and father.

QUO VADIS: It cost seven million dollars, its actors include thirty thousand humans and sixty-three Christiancrunching lions, and in the department of mammoth semi-Biblical spectacles it adds up to a whopping good show, in spite of some regrettable corn and overacting in its more intimate closeups. Even at that, though, the dialogue often has a mature suavity not usually noted in these huge hellfire circuses.

ROYAL JOURNEY: Canada and her people are co-starred with Princess Elizabeth and the Duke of Edinburgh in a feature-length memento of the royal tourists' 1951 travels on this continent. It's neither bombastic nor boring; in fact, it's so good that it's getting practically worldwide distribution—o proud feather in the cap of the National Film Board of Canada.

TALES OF HOFFMANN: Musically, this is an expert transcription of the Offenbach opera about an unlucky Lothario whose sweethearts turn out to be a robot, a flirt, and a corpse, in that order. As a film, it's only about halfway successful — quite wonderful one moment, bloated or obscure the next. A British job, it is not on the whole u£ to the level of The Red Shoes, though definitely worth seeing and hearing.

WESTWARD THE WOMEN: A tough 1850 guide (Robert Taylor) shepherds a caravan of husband-hunting women from Chicago to California, battling such hazards as clashing temperaments, redskin raids, Mother Nature, and illegal male ardor. A “different" and rather interesting western, which might have been twice as gripping if they had shortened it by about half an hour.

Man in the Saddle: Western. Fair.

Man With a Cloak: Mystery. Fair.

The Tanks Are Coming: War. Fair. 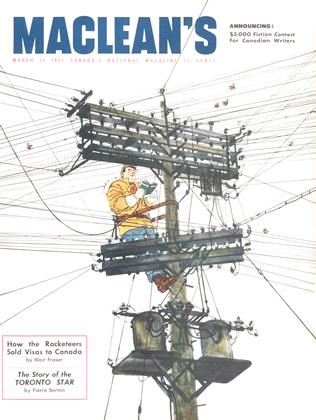