Davis, a bit pudgy in jodhpurs, runs her old-time gamut from livid fury to maniacal laughter in this distressing British-made mellerdrammer. It's the sort of thing she used to do before All About Eve, only worse. Gary Merrill and Emlyn Williams are among those unhappily involved.

APPOINTMENT WITH VENUS: Occasional dull patches don't prevent this one from being a pleasant little British comedy starring David Niven and Glynis Johns. The Venus of the title is an aristocratic cow who must be rescued from the Germans occupying one of the Channel Islands.

DEATH OF A SALESMAN: Fredric

March, in my opinion, often overacts the tragic central role of Willy Loman in this well-meant but faltering screen version of the Arthur Miller play. There is a good deal to be said for the film nonetheless, especially the magnificent work of Mildred Dunnock as Willy’s wife, one of the wisest and most valiant heroines in several seasons.

I’LL SEE YOU IN MY DREAMS: Hum

mable old songs and a likeable performance by Danny Thomas compete with a hackneyed story in yet an.mer nostalgic Hollywood musical. Doris Day is in it, too.

Richard Brooks, a droll fellow when he gets really rolling, imparts a fair amount of polish to this latest retelling of the hoary yarn about the rogue who meets an angel and repents. Stewart Granger and Pier Angeli are the lovers, and George Sanders a super-rogue who menaces them.

between Clark Gable and Broderick Crawford and a number of sultry love scenes between Gable and Ava Gardner are among the guaranteed boxoffice ingredients of a big western, set in Texas in 1845. Corny, but fun.

PHONE CALL FROM A STRANGER:

Showing what happens when a planecrash survivor (Gary Merrill) conscien-

tiously sets out to straighten the tangled lives of the people left behind by his dead fellow passengers. The story lags in spots, but the net result is a betterthan-average comedy-drama, featuring Shelley Winters, Michael Rennie, Keenan Wynn and Bette Davis. The latter, by the way, does herself proud in this one.

QUO VADIS: Not your dish, I'm

afraid, if what you demand is subtlety and intimacy ... but honestly recommendable if you can settle for oldfashioned Biblical Spectacle with a capital S. Not all of its humor is unintentional and some of the big moments are quite stirring. The cast of thirty thousand includes Robert Taylor, Deborah Kerr, Leo Genn, Peter Ustinov and a lot of lions.

ROOM FOR ONE MORE: A rather

enjoyable domestic comedy—a bit too cute in spots, though—about a married couple who have three children of their own but can't resist sheltering any bruised waif who comes knocking at the door. Cary Grant and Betsy Drake are the parents.

camera record, in color, of last year s North American travels by the charming young Princess who now, as Queen, has ushered in a new Elizabethan Age.

SAILOR BEWARE: The many fans of Dean Martin and Jerry Lewis are giving this one another rapturous reception at the ticket windows. Those who, like myself, can take the lads or leave 'em strictly alone are finding it a lot less diverting than its predecessor, That's My Boy. It's a rough-house farce about life in the navy, Hollywood style.

TALES OF HOFFMANN: Better for the ears than for the eyes, this is an opulent British filming, in brilliant color, of the bizarre Offenbach opera, with Sir Thomas Beecham as musical director. At least two of the five episodes are first-rate filmically, too, but I found some of the others fairly heavy going. The international cast of singers, dancers and actors is an excellent one and the picture has many a splendid moment.

An American in Paris: Musical. Tops. Anne of the Indies: Pirate love. Fair.

Man With a Cloak: Mystery. Fair. Man With My Face: Crime. Fair.

On the Loose: Drama. Fair.

A Streetcar Named Desire: Drama for 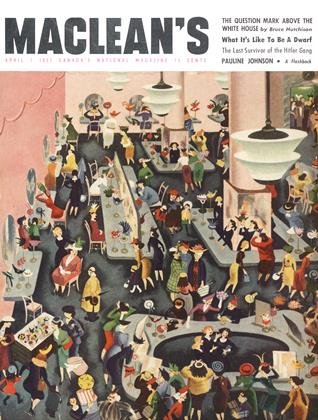