THE British House of Commons is like a theatre where the drama of events and personalities is played under the fierce arc light of history. It is also like the stock exchange where human values are always changing. Perhaps it is even more like a boxing contest where one blow may determine the result. No wonder there is an endless queue of people by day and night waiting to get into the public gallery.

Life in the British parliament is boring and fascinating, dull and brilliant, trivial and dynamic. It gratifies human vanity and crushes it. You may speak for half an hour and empty the House or you may interject a pungent phrase and steal the headlines. “The House of Commons,” said a cynic, “consists of six hundred and twenty-five megalomaniacs of all shapes and sizes.” A more thoughtful observer said, “It is Heartbreak House.”

Power is to men what beauty is to women. When Churchill came to the House after winning the election last October he looked ten years younger. The nation was on the verge of bankruptcy. Korea, Persia, Egypt and Malaya were in eruption, the crippling cost of rearmament was shattering the British economy, the sinister shadow of imperialistic Russian Communism was deep on the Western world. And Churchill’s face beamed like a full moon because the burden would be on his shoulders.

“Give me beauty,” is the secret cry in nearly every woman’s heart. “Give me power,” is the open cry in the heart of every man of destiny. Probably it is good for humanity that this phenomenon exists. Beauty is essential if we are to have poetry in our daily lives; and power is essential in politics if mankind is to be led out of the valley of despair.

I apologize for these musings but they are essential to my theme which is the drama of personalities being played now at Westminster, a drama which makes the ordinary theatre a drab thing by comparison. And

after all what has the theatre to offer against such stars as Winston Churchill, Anthony Eden and Rab Butler? My story is of these men and before the story is ended I hope you will agree with me that the tale is not lacking either in interest or significance.

When Churchill led us into the last election there were many Tories who recognized his greatness but regarded him as a doubtful electoral asset. We said to each other that the cry of “Warmonger!”—ungrateful and unjustified as it was would cost us votes, and it did. We also contended that if Eden led us instead of Churchill the maternal instincts of the women voters would be mobilized in our favor, which was probably true. There was another argument which had logic to support it: that a man in his seventy-eighth year could not carry the strain of office in a period of domestic and world upheaval. Logically we were right. Two and two make four. No one has ever denied that, except an Irish wit who asked, “What do two lemons and two moons make? Four what?”

At any rate under Churchill’s leadership we scraped home with a majority of such slender proportions that the Conservative MP is simply turned into lobby fodder. We are on duty by day and by night, except for a couple of hours now and then when we are allowed out on parole. I can assure you that under these conditions the first requisite of an MP is good health.

When the new Parliament began its stormy career the wise men said that Churchill would only hold office for a short time and then hand over to Eden. In fact these prophets were certain that an arrangement to that effect had been entered into by the two men. After all, Churchill only wanted to fill that gap in his life story of never having been elected prime minister by the British people. You will remember that in 1940 he succeeded Chamberlain without an election, and

When the victorious Conservatives came back last October Eden’s manner certainly indicated there would be no war of the Tory succession. He carried himself as the acknowledged crown prince and spoke with a new dignity.

The Eden boom was enormous. Even the socialists looked at him with affection and with fear. How would they put any fire into their Opposition once Eden was prime minister? He was so decent, so honorable, so fair, so dignified. Eden’s shares stood ace high on the political stock exchange.

Nor did the Foreign Secretary merely stand and nod while Churchill was forming the Government. Eden has his own list and insisted upon certain appointments being made. But Churchill did not mind. He was the captain of the ship and knew that when she went to sea there would be only one skipper.

I am not revealing any confidences in saying that before the general election some of Eden’s closest friends urged him not to become Foreign Secretary again. “Churchill will not be able to be Prime Minister and lead the House as well,” they said. “You should be the Lord Privy Seal with no department, but you would be in the cabinet of course. Then you should take the job of Leader of the House and speak in such debates as you choose.”

At any rate when Churchill had completed his ministerial appointments Eden went to the Foreign Office and Rab Butler was given the Treasury, while Churchill became Prime Minister and Minister of Defense. These were the Big Three on which the Tory edifice rested.

Now it is time to tell you about Rab Butler—whose nickname comes from the initials of Richard Austen Butler. He was born in India in 1902 (the son of Sir Montagu Butler) which meant that he was only a boy in the First World War. At Cambridge he won all sorts of honors and was the President of the Union, yet he was diffident and shy.

At twenty-four he married into the famous and wealthy Courtauld family whose name is woven with millions of miles of silk, and he became member of parliament for the district in which Courtaulds has one of its biggest plants. In the course of time his wife bore him three sons and a daughter. In 1932 we see him as under - secretary for India in Ramsay MacDonald’s Coalition Government repelling the onslaughts of the rebel Churchill.

Later on when Eden, as Foreign Secretary, was dueling with Mussolini and Hitler our friend Rab Butler was Eden’s under-secretary. Day by day he took the parliamentary onslaught of questions aimed at his chief and became known as the greatest stonewaller of all time. Nothing upset him. Nothing excited him. He was not there to score runs but merely to prevent the socialist bowler taking his wicket. Not until the war came was he given senior office. It was perhaps typical of the definite and unchangeable character of the man that with the world in eruption he became Minister of Education. What is more he proved a great Minister of Education in a period when mere survival filled the thoughts of most of us.

Then came the election of 1945 and the Conservatives were out. The tide had turned with a savage force and wise men said that it would not flow for the Tories again for twenty-five

years. The shattered Conservatives re-formed their ranks out of the few who had survived. Among the appointments was that of Butler to be the head of political research and economic policy planning in the Conservative central office.

This was just to his liking. Instead of the noisy brawling of the debating chamber he could study the trend of things as in the days when he was at Cambridge. He was still shy and made no intimate friends in parliament. But we all liked him, admired him and called him Rab, although there was a psychological barrier beyond which we did not go.

He wrote the Conservative policy for the election in 1950 and issued booklets which angered the right wing of the party. He was too “pink” for the diehards, and when we failed to win there were murmurings against him. Undeterred he worked on the policy for the next election which he knew must come in a year or so. Once more he aimed at a democracy founded on Conservative principles.

When we came back as victors it was obvious Butler would be given very high office. Many people thought that his own choice would be the Ministry of Education, where he could carry out the reforms that he had planned during the war. Instead he was made Chancellor of the Exchequer, the post of equal importance to that of Foreign Secretary. He was one of the Big Three —Churchill, Eden, and Butler.

Almost at once Anthony Eden was off on his travels. No longer do ambaasadors dominate the diplomatic scene. Their principal job is to meet and entertain their country’s foreign minister when he journeys to Paris or Washington or, as recently, to Lisbon where he meets his opposite numbers. Days would pass in the Commons without ever a glimpse of Eden. Meantime we were engaged by day, and often into the next day without a break, fighting the vigorous socialists. And one of our constant leaders in the fight was Chancellor Butler.

But his real testing time was coming. There is one occasion when the Chancellor of the Exchequer completely dominates the scene. The budget is decided solely by the chancellor, who does not reveal his secrets to his cabinet colleagues until the morning of budget day. And then it is only a courtesy on his part.

At three-thirty in the afternoon Butler opened his budget speech. At five-thirty he sat down to such an ovation as I have seldom seen equalled in all my stormy seventeen years as a member of parliament.

A boy of fifteen could have understood everything he said: a man of the highest intelligence would have been stimulated by the clarity and audacity of the speech. The socialists were stunned by this book-loving minister who dared to say that while the casualties of life’s battle should be given every care what really mattered was to encourage the men who were still on their feet.

When it was over and the House had risen in a state of great excitement I encountered Churchill in the lobby. “This is Tory democracy,” he exclaimed proudly. He knew the fierce fight that would follow as soon as the socialists recovered their morale but he also knew that Butler had put back into the Conservative Party a fighting faith for the future.

That is the story of Rab Butler. In one speech he became a powerful contender for the Conservative throne when it becomes vacant. But then I warned you that the House of Commons is like a stock exchange where values are always changing. ★ 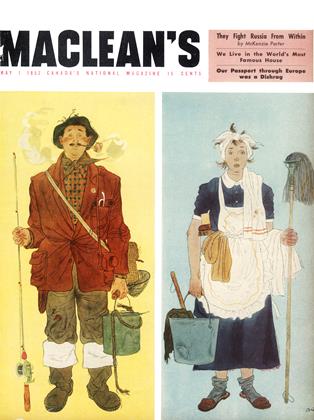