"WIN, lose or draw, all three parties will be glad last Mon-

day’s by-elections are over. They’ve been a headache.

Progressive Conservatives thought at first the headaches were all their own, maliciously induced by Machiavellian Grits. After all, only two of the s-ix contests were caused by the deaths of sitting members. The other four followed appointments of Liberals to the Bench, the lieutenantgovernorship of Ontario, and the leadership of the Ontario Liberal Party.

“Last year we won five out oí five by-elections,” a glum Tory remarked last month. “This year the Grits had to arrange a little landslide of their own, to prove the tide had turned again.”

But the PCs were soon elated to realize they’d been wrong. There may have been some such ulterior motive in the opening up of Gloucester, N.B., which last went Conservative in 1896. But in the other ridings, safely Liberal though most of them looked, the Grits expected trouble and got it.

Ontario (the riding, not the province) was the worst. In the Parliamentary Guide it looks like a Liberal stronghold, never lost to the Liberal Party in five consecutive general elections. In fact, however, it has never been a safe seat (the CCF took it in a by-election in 1948) and it has never been less safe than it is now.

This is the seat vacated by Walter C. Thomson when he assumed the Liberal leadership of Ontario. Thomson took a shellacking in the Ontario provincial election last November, to the surprise of practically nobody. His own riding had formed

the same opinion of him long before, according to the scouts of all parties. Liberals feared, during the campaign, that this opinion had been extended to the Liberal Party generally. Privately, a month ago, they were ranking the Liberal third among the three candidates in Ontario.

They gave first place to the Progressive Conservative candidate, who is mayor of Oshawa and a prominent figure in the United Auto Workers. Privately, the CCF did the same. Only the Progressive Conservatives seemed to doubt their man’s chances oí winning, but their doubts were considerable. No party, in short, was enjoying itself in Ontario riding.

Roberval, Que., was not opened because the Grits considered it entirely safe. Not at all. Even in the Liberal landslide of 1949, the antiLiberal vote exceeded the Liberal by one hundred and ten. If the Progressive Conservatives had managed to get the candidate they originally hoped for, Liberals would have been really afraid of losing Roberval. As it is they think they’ve won, but they’re not lusty about it.

Why, then, did they open the seat at all? Mr. Justice J. A. Dion, the ex-MP, had been in parliament less than tw'o terms. He didn’t seem entitled to a lifetime job on the Superior Court Bench. Why isn’t he still in parliament?

The answer is quite simple. Dion was appointed Deputy Speaker of the Commons in Sept. 1949. It was not until later that the Government discovered his command of English was not equal to that, extremely taxing job. He’d been a good MP and gives every indication of being a good judge, but he w'as not a good deputy speaker. If Continued on page 50

nature had been allowed to take its course he’d have become Speaker of the next parliament. So he went to the Bench, and the by-election followed.

Waterloo North is another Liberal fortress which the Grits don’t really expect to lose. It includes Mackenzie King’s birthplace. Louis Breithaupt, now Lieutenant-Governor of Ontario, had a majority of ten thousand in 1949, and no Conservative has carried Waterloo North since 1911. Nevertheless, it’s a tricky riding, a predominantly German district with its own views about the Atlantic Pact and the future of Germany, and elections tend to waken a variety of sleeping dogs. Also, as in all “safe” seats, there is rivalry for the Liberal nomination and resultant bitterness no matter who gets it. All in all, the Liberals will be glad to be shut of Waterloo North.

Experience has taught them, too, that wherever the Opposition parties have any strength at all, they get out the vote for a by-election more easily than the Government can.

There have been twenty-two byelections since the general election of 1949, and seventeen of them have left the representation unchanged. The other five were all Progressive Conservative gains from the Liberals. In those five seats the total Conservative vote was only 2,727 votes higher than it had been in the general election, when Liberal majorities had totaled sixteen thousand. But the Liberal vote in the five ridings dropped twenty thousand below the general-election total and thus gave a handsome by-election majority to the Progressive Conservatives.

Some ridings in Canada are so decisively Liberal that no falling off in the turn-out of Liberal voters could defeat the party’s candidate. But few of the six ridings contested during May can be put in this category.

Except for Gloucester, the only riding of the six where the Grits felt entirely happy was Brome - Missisquoi, Que., which had not been opened by government decision at all but by the death of Henri Gosselin. They had some worried moments at the outset but as soon as they persuaded Maurice Halle to run again they relaxed.

Major Maurice Halle was MP for the riding from 1940 to 1949. In 1943, while serving with the Royal Canadian Artillery, he seconded the address in reply to the Speech from the Throne. When he finished a brief, eloquent speech in his own language, the late Mackenzie King said to a friend: “There spoke a future prime minister of Canada.”

Halle is still young enough for the prophecy to come true, but he seemed to have no political ambitions. He made no more speeches. In eight subsequent and three previous sessions his name never once appears in the index of Hansard. Before the 1949 election he retired to go back to horse breeding. With Halle back in the field the Liberals had no doubts about winning in Brome-Missisquoi — until favorite son Halle failed to win the nomination at the local party convention.

This development was not quite as disastrous as it sounds. Winner J. L. Deslieres and loser Halle are good friends and no real party split developed. Still, it was a reminder to the Liberals of the vanity of human wishes.

Moreover, in the foregoing ridings, Progressive Conservatives have nothing to lose. They think they have better candidates than usual in several

of them, which is encouraging especially in Quebec and in French-speaking Gloucester. They are not expected to win any of the five, and thus will suffer no loss of face in defeat.

Ironically enough, the PCs’ worst troubles came in Victoria - Carleton, N.B., the only one of the six which had been a Conservative seat.

Only once at a general election (1935) has Victoria-Carleton gone Liberal. The late Heber Hatfield recaptured it in 1940 in the teeth of a Liberal landslide and held it without difficulty in two more general elections. For Heber Hatfield it was a safe seat. For any other Conservative (in the PCs’ own opinion) it isn’t safe at all.

Heber Hatfield had been no friend of George Drew but he changed this opinion before he died. George Drew used to go out to see him almost daily at the Ottawa Civic Hospital and bring him pots of a favorite soup which Mrs. Drew made for him. If Hatfield had got better he might well have made his riding solid for Drew, but George Drew knew Heber Hatfield wasn’t going to get better. Meanwhile, the Conservatives of Victoria-Carleton knew what Heber’s opinion used to be, but they knew nothing of Heber’s change of mind.

After Hatfield’s death the party’s first thought was to play it safe. They asked Mrs. Hatfield, an able and personable woman, to carry on for the rest of her husband’s term only, a plan which would probably have got her an acclamation. She declined.

They then managed to persuade Col. G. W. Montgomery, QC, of Wood8tock, N.B., to accept the nomination. Meanwhile three other candidates, including the sitting MLA and a former provincial party leader, decided they should be nominated instead. One oí them threatened to run as an Independent if he didn’t get the party’s blessing. Any of them could have wrecked the PC hopes, but none, in the opinion of PC strategists, could have won the seat from a good Liberal.

Frantic efforts were made to get M rs. Hatfield to change her mind, since none of the contenders would have opposed Heber’s widow. She still refused. So the party called a convention and they did, in the end, get the man they wanted, but only after three ballots and a good deal of bitterness. Whether the bitterness melted in the heat of the campaign, the by-election result will show. 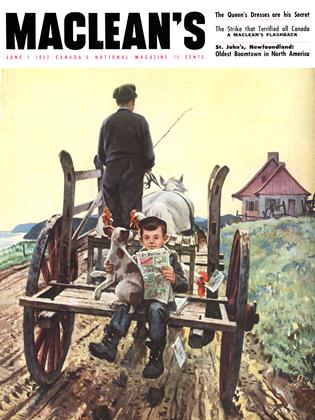