Millions of Canadians are troubled by the most intimate paradox of our times: Medical care has improved beyond measure but its costs have soared so high that an illness, or an accident, can bankrupt almost any family. Maclean’s devotes most of this issue to a searching study of the health services of the nation and their price

A few years ago Dr. Wilder Penfield, the distinguished Canadian neurosurgeon, observed that “medicine is coming to the crossroads of its destiny,” and cited as evidence the rising cost of medical care.

After four months of study and eight thousand miles of travel I can report that the crisis Penfield predicted is at hand. I discussed it with hundreds of citizens of all classes. Everywhere I found a growing concern about the high cost of being sick. As a Halifax shipyard worker remarked, “The average guy can’t afford to slip on the street nowadays. It’s liable to put him in the poorhouse for the rest of his life.”

Today it is the large middle class which most, keenly feels the rising costs of health care. The poor receive limited free care; the rich can afford most emergencies; but the average wage earner can be bankrupted by sickness. Small-loan companies’ biggest customers are people who can’t meet medical bills.

In every community I met people sorely pressed by the high cost of sickness, like the four-thousand-dollar-a-year Toronto craftsman who was debt-free, owned a houseful of furniture and had saved two thousand dollars as a down payment, on a house. A lung ailment made him penniless in six months. Or the sixty-five-year-old Ottawa man who was intermittently ill for two years and lost, his life savings. His medical expenses were ten thousand dollars.

Hospital costs have skyrocketed. In 1913 you could get a publicward bed for $1.02 a day. Today they come as high as sixteen dollars. But this is only the start. Operating-room charges, X-rays and drugs all eat into the pocketbook. Special nursing care alone can cost thirty dollars a day.

Yet most, hospitals face a financial crisis. Last year, for example, Montreal’s Royal Victoria was four hundred thousand dollars in the red. In 1939 each patient cost the Royal Vic $5.21 a day. Now it, is $14.38. And hospitals must shoulder a large share of the costs of indigents: one nonpaying patient has already cost, a Montreal hospital $15,000.

Many hospitals also face grave shortages of beds, staff and space. The waiting list at Ottawa Civic now numbers nine hundred and ninetythree. The Winnipeg General nursing staff is sixty short.. In the laboratories, technicians stand hip-to-hip in rooms intended for one third the number.

Doctors’ fees have gone up everywhere. In B. C. a general practitioner now charges six dollars for a house call. The specialist is much harder on the purse. Instead of one doctor, the patient now sometimes finds he needs ten.

The new “wonder” drugs are expensive: sixteen capsules of Aureomycin cost $11.15. Vitamin capsules cost up to twelve dollars a hundred. “My prescriptions sometimes cost more than my fees,” says one specialist.

Aggravating the crisis is the growing problem of chronic illness. Canada’s two hundred and forty-seven thousand chronically ill people constitute a serious problem since one patient occupying a hospital bed for a year keeps out. thirty-five who are acutely ill. Yet there is nowhere else to put them.

There’s another problem: the troubled relationship between the doctors and the public. Doctors are being accused, often unfairly, of being moneygrabbers, failing to understand patients, diagnosing in a sloppy manner, failing to come in an emergency, lacking social consciousness.

Because of rising health costs, two important issues are shaping up: Has the time come to introduce national health insurance? If so, what kind?

This last question is packed with dynamite. The doctors feel they should operate any national plan themselves. They believe a governmentrun plan would rob them of their independence, overwork them, lower their standards and interfere wit h the intimate doctor-patient relationship. Advocates of a compulsory government plan don’t believe vast sums of tax money should be given to a private organization for spending. And they point to compulsory government schemes in other places where doctors are contented with their lot. These are only a few of the issues which will have to be settled when and if Canada decides to make health a fully national concern.

How to bring together the patient, and the health services he so urgently requires is the crucial problem to be discussed in this special issue. On its solution depends the health, strength and happiness of the Canadian people. ★

IN AN AGE OF SPECIALISTS, DR. VICTOR JOHNSTON, OF LUCKNOW, ONT., WORKS THE WEARY FIFTEEN-HOUR DAY THAT IS STILL PART OF THE LOT OF THE VANISHING GP 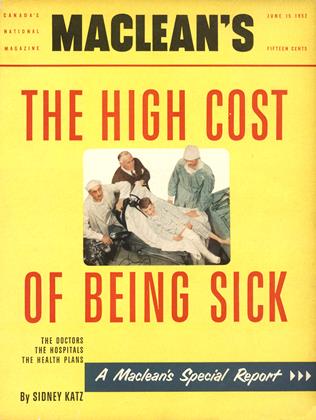