THE AFRICAN QUEEN: A gin-swil-

ling tramp skipper (Humphrey Bogart) and an invincible old-maid missionary (Katharine Hepburn) battle their way past cataracts and enemy guns and a thousand jungle hazards to strike a blow for Britain against the Hun in 1914. The result, although considerably more melodramatic in spots than C. S. Forester's novel, is a vastly enjoyable movie directed by John Huston. It was filmed, of course, right in Africa.

THE BIG TREES: An unconvincing outdoor soap opera, with pseudospiritual overtones, about a ruthless lumber pirate (Kirk Douglas) who discovers his better self in the mighty forest.

BRIDE OF THE GORILLA: A rubberplantation yarn, badly in need of extensive patching and vulcanizing. It tells of a tropical cad (Raymond Burr) who has a curse put on him by a native witch and then gradually turns into an ape. Tarzan shouldn’t worry.

nemann has put this superior western on film with stunning craftsmanship. There’s quite a bit of disquieting cynicism about the responsibility of the individual citizen but also enough tension, pace and canny characterization to build up ever-increasing interest. Gary Cooper, as a lone-wolf marshal in a sick and cowardly town, almost breaks his heart trying to raise a posse against a band of killers.

MACAO: A stale Oriental whodunit about one of those smoldering torch singers (Jane Russell, in this case) whose male admirers are always up to their ears in homicide. Robert Mitchum, Brad Dexter and William Bendix are among the blokes thus haplessly in-

released in 1941, but now making the rounds all over again as a re-issue, this still rates as one of the very best crimeand-mysfery jobs Hollywood has ever

offered. John Huston adapted if from Dashiell Hammett’s suspenseful story about a golden bird and the violent deeds it provokes among the people who covet it. A honey of a movie.

MR. LORD SAYS “NO!”: A retired Cockney workingman (Stanley Holloway) and his spunky shopkeeper wife (Kathleen Harrison) defy the whole ruddy Empire in refusing to let their little home be torn down to make room for the Festival of Britain. The story possibilities are rather thinly developed but some of the bureaucratic turmoil is pretty funny.

OUTCAST OF THE ISLANDS: A sombre but compelling melodrama, based on a Joseph Conrad novel, about an exiled rotter (Trevor Howard) whose overpowering desire for an East Indies temptress soon leads to his ironic enslavement. Director Carol Reed expertly uses a fine cast and authentic backgrounds in this British film.

SYMPHONY OF LIFE: A musical from Soviet Russia. It has a number of lively and melodious moments, a Liszt concerto played with fiery virtuosity and some pleasant choral and solo singing. It also has several phony touches borrowed (unthinkably) from Hollywood, such as a huge invisible orchestra which mysteriously starts thundering while the soldier-pianist is playing in the battle area.

TEMBO: Howard Hill’s exploits as a big-game hunter with a bow and arrow in Africa are certainly impressive, but the spoken commentary that goes with them is often dull and corny and the real “action” sequences are few and far between. A feature-length jungle travelogue, in color.

WALK EAST ON BEACON: As o documentary close-up of modern FBI techniques in tropping foreign spies, this picture packs a lot of punch. As a drama about human beings enmeshed in dangerous conspiracy, I find it somewhat less convincing.

Return of the Texan: Western. Good. 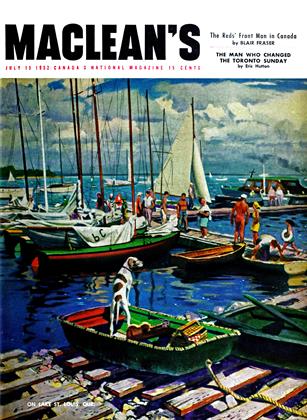