THE AFRICAN QUEEN: The original climax of the C. S. Forester novel has been unabashedly hoked up in John Huston's film, but the final result remains a piece of solid entertainment. Humphrey Bogart and Katharine Hepburn versus the jungle and the Germans at the outbreak of World War One.

THE ATOMIC CITY: A brisk and suspenseful low-budget thriller about the kidnaping of a Los Alamos nuclear scientist s small son by foreign agents. Authentic location shots, believable characters on both sides, and a tense finaie in the style of yesterday's cliffhanger serials help to make this one an item worth seeing.

CLASH BY NIGHT: Will bad-girl

Barbara Stanwyck settle down with honest fisherman Paul Douglas or run away with scowling movie projectionist Robert Ryan? The solution manages to be both inevitable and implausible in this overdrawn mellerdrammer, which is fleetingly brightened by Marilyn Monroe as a purring cannery cutie.

HIGH NOON: An uncommonly good western, weakened only by an occasional overdose of bitterness in its harsh scrutiny of a town's flabby conscience. The story has to do with a dogged marshal (Gary Cooper) whose neighbors cravenly abandon him at zero hour while a squad of gunmen are preparing to terrorize the community.

MANON: A French “modernization” of the eighteenth-century Abbé Prévost

none of the operatic music which the same story evoked from Massenet and Puccini. It has its effective moments, but little Cecile Aubry looks too juvenile for her steamy role as a temptress whose morose lover becomes a black marketeer so he can surround her with luxuries.

MR. LORD SAYS “NO!”: In spite of a failure to live up to the comic promise

An American in Paris: Musical. Tops. Anything Can HappenComedy. Good. Battle at Apache Pass: Injuns. Fair. Belles on Their Toes: Comedy. Fair.

of its basic situation this is a fairly amusing British fable about a Cockney couple (Stanley Holloway and Kathleen Harrison) who defend their umble 'ome against all invaders, including the government.

PAT AND MIKE: The creators of Born Yesterday have come up with another rowdy but literate comedy which is, I think, a honey of a show. Pot, an all-round woman athlete (Katharine Hepburn), signs up with Mike, a hardboiled promoter (Spencer Tracy), and fheir adventures are a lot of fun for an audience. An addled prizefighter (Aldo Ray) is also divertingly involved.

RED MOUNTAIN: A competent but

utterly routine outdoor action film in which imperturbable southern Captain Alan Ladd does his soldierly utmost for the Confederacy in the wild, wicked west. Arthur Kennedy and John Ireland are among his antagonists.

THE SNIPER: “Thoughtful” and “exciting” are by no means contradictory adjectives in assessing the merits of this psychological suspense drama. It‘s about an unusual sex criminal (Arthur Franz) who paralyzes a city with horror by killing attractive brunettes with a high-powered rifle. The suspense and poignancy of the story are maintained right up to and including the very final close-up.

SOMETHING TO LIVE FOR: Producerdirector George Stevens, who did A Place in the Sun, lavishes his gifts in vain on this soap-opera script. It tells of a reformed drunk (Ray Milland) who struggles inside a triangle with his wise and noble wife (Teresa Wright) and a jittery actress (Joan Fontaine).

WALK EAST ON BEACON: The conventional spy-ring plot has its share of corn and nonsense, although the picture does offer a graphic study of actual G-man operations.

Return of the Texan: Western. Good. 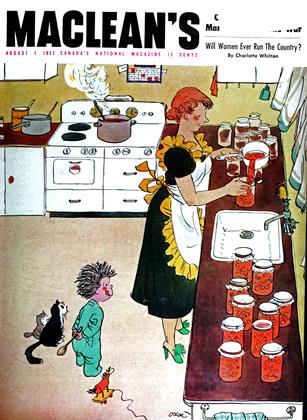