THE ATOMIC CITY: A mere outline of its plot (G-men chase spies who capture important scientist's son) gives no hint of the honest entertainment values embodied in this neat, brisk little suspense yarn.

THE CAPTIVE CITY: This is an intelligent low-budget crime drama about a courageous newsman (John Forsythe) who finds out that a lot of the nicest people in town are mixed up in a national syndicate of outlaws.

THE FIGHTER: Based on a Jack London story, here is an earnest but muddled melodrama in which the central figure is a Mexican strong boy (Richard Conte) thirsting for revenge against the despot who murdered ail his loved ones. He becomes a boxer in Texas to earn money for The Cause.

HAS ANYBODY SEEN MY GAL?: Charles Coburn, who is now seventyfive, turns in one of the liveliest performances of his career in this pleasant little domestic comedy. He appears as a crusty millionaire who decides, in the year 1928, to hide his identity and become a soda-jerk for reasons too complicated for summary here. The era of rolled stockings and raccoon coats is recalled with agreeable nostalgia and not too many visible inaccuracies.

KANGAROO: Except that it was

actually shot in Australia by a Hollywood studio, I find this to be a very ordinary western of the big-budget species. Maureen O'Hara, Peter Lawford and Scotland's Finlay Currie are in the competent but unexciting cast.

PAT AND MIKE: One of the year’s funniest screen comedies. "Pot" is a sensational lady athlete (Katharine Hepburn) who can beat everybody at everything unless her patronizing fiancé (William Ching) is standing around putting the hex on her. ' Mike," her rescuer from this predicament, is an unsentimental sports promoter (Spencer Tracy) who grows to love her even

though he knows she could beat him to death in a fistfight.

ROBIN HOOD: Walt Disney’s second non-cartoon adventure is a better job all-round than its predecessor. Treasure Island. Made in England, the film has Richard Todd as the legendary Good Bandit, Joan Rice as his beloved Maid Marian, James Hayter as a wonderfully sly Friar Tuck, and Elton Hayes as a dulcet-voiced Allan-a-dale. A fine item for the whole family.

THE SNIPER: A superior entry in the department of crime-and-suspense. It tells of a sorely troubled young man whose miserable childhood has unhinged his emotions, causing him to roam the rooftops drawing a bead with a telescopic carbine on brunettes who remind him of his mother. Recommended.

3 FOR BEDROOM C: Gloria Swanson's first picture since the admirable Sunset Boulevard of two years ago. She is cast as an eyelash-fluttering screen star who boards a Hollywood - bound train with her obnoxious adopted daughter and instantly falls in love with an owlish young professor. A strained and dismal romantic farce.

WHEN IN ROME: An escaped convict (Paul Douglas) and a genial young priest (Van Johnson) become buddies on a trans-Atlantic liner. Later they meet in Rome during the 1950 Holy Year observances and this time the jailbird is masquerading in ecclesiastical feathers. There are some amusing moments and a lot of photogenic Roman scenery in the improbable comedy that follows, but the trick ending is more sappy than happy.

THE WORLD IN HIS ARMS: A swashbuckling adventure-romance in which an audacious skipper from Boston (Gregory Peck) and a pert Russian countess (Ann Blyth) help to turn Alaska into part of Uncle Sam s domain. Corny in spots, but fun. 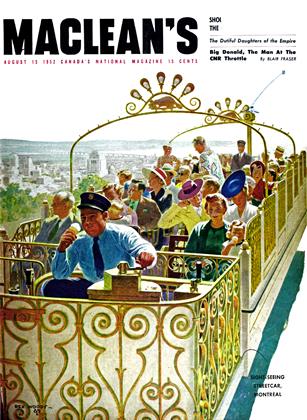