The Next President of the U.S. BLAIR FRASER September 15 1952

IT’S COMMONPLACE to say that no matter who wins the U. S. election the free world can’t lose. Each party has nominated such a wise and proven leader that either will make an excellent president. This is true as far as it goes. Certainly Adlai Ewing Stevenson and Dwight David Eisenhower are both men of great personal distinction who agree with each other on the fundamentals of foreign and domestic policy.

But it is not true that a Republican and Democratic administration would be alike as two peas. However closely the two leaders may seem akin, the two parties have different backgrounds, different platforms and, above all, different personnel in Congress. For Canada and the other Western allies there are very definite advantages and disadvantages in victory for either side.

So far as basic policy is concerned, the allies could scarcely hope for better treatment than they’ve been getting from the Democrats. Every country this side of the Iron Curtain has felt the benefits of American aid under Democratic rule. And, the Democrats are the party traditionally interested in foreign trade. Their platform reiterates their belief in the Reciprocal Trade Agreements Act which has done so much in the past seventeen years to mitigate the evils of the Republican SmootHawley tariff law. The Republican platform doesn’t mention foreign trade at all.

But with all their good intentions, the Democrats have suffered these last few years from a crippling defect. They have not had the full confidence of the American people in their foreign policy. The result has been a prevailing uncertainty which has made smooth conduct of the Western alliance almost impossible.

Eisenhower’s entry into politics revived the hope that this political stalemate would be broken: He of all men could surely restore

the confidence of the American people and the free world and the self-confidence of the U. S. administration itself. If he could achieve that as head of u Republican regime all other considerations would be secondary.

But his task won't be as easy as some thought. His enemies oppose everything he stands for. Luckily most of them are inside his own party. He has defeated them once by winning the nomination. Presumably he can defeat them again.

Fortunately, the Democrats too have chosen with wisdom. No man is better titted than Stevenson to maintain the best in Democratic tradition. No Democrat is less vulnerable to the reproaches the party has earned. -\nd he enjoys the supreme advantage of being indebted to no one.

There are pros and cons either way, but the greatest issue has already been decided. In the fields that matter most, the course of American policy was set in Chicago. 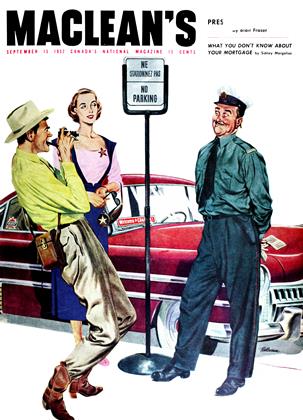