THE BEST movie of 1952, in my opinion, is a western, although nary a shot is fired in it until the climactic fusillade in the final ten minutes.

High Noon is a strong and haunting story about a cowtown marshal (well played by Gary Cooper) who is humble enough—and unconventional enough, as Hollywood’s frontiersmen go to sit down and weep a little and write his last will and testament before walking out alone to tackle a squad of killers. Carl Foreman’s masterly script and director Fred Zinnemann’s cinematic feel for people and places helped to make this one a picture I enjoyed and admired even more the third time than I did at my first viewing. The characters are not the usual rangeland stereotypes; they are individual human beings. The craftsmen who put this compelling film together paid homage to the screen itself by taking a hackneyed situation the good guy, the bad guys, the lonely death-walk down the deserted street—and turning it into something fresh and mature and honest by dint of superior treatment all along the line.

Limelight, Charles Chaplin’s first new movie in five years, is disliked by some people whose judgments I esteem, but to me it seems one of the finest things Chaplin has ever done. Not even an occasional draggy or garrulous episode can detract seriously from the incomparable grace and wit and humanity which abound in this picture, fashioned with loving care by the greatest one-man moviemaker of them all.

Only two of my ten-best list, Breaking Through the Sound Barrier and The Man in the White Suit, are British films. But the British studios continued to delight audiences at home and abroad with many a worthwhile item. At the same time the British and the Americans together pooled their casts and cash and craft in such recommendable trans-Atlantic collaborations as Five Fingers, The African Queen, Ivanhoe, and The Quiet Man. Incidentally, most Canadians didn’t see The African Queen until 1952, so it belongs in my ’52 list even though it brought actor Humphrey Bogart an Academy Award for ’51.

Accolade For a Lovable Lion

My ten-worst list starts with the worst of all, the pretentious bigbudget floperoos like 3 for Bedroom C and Another Man’s Poison. The list concludes with The Unknown World and Bride of the Gorilla, which—though bad enough, heaven knows—never really set out to be anything but moronic fare. All my ten worst are from Hollywood or Hollywood-made except Fun for Four (a distressing British domestic farce) and Mad About Opera, a parcel of musical garlic from Italy.

In Canada, and in many cities of the United States, many customers had to wait until 1952 to see Royal Journey, our National Film Board’s lively and sweeping travelogue of the visit paid to these shores in ’51 by two highly popular residents of Buckingham Palace. It deserves inclusion among the screen’s worthier recent products.

Elsewhere on the cinema scene last year I found myself noting with warm approval such diverse phenomena as the lovable lion in Fearless Fagan, the saucy and imaginative sparkle of a cartoon short called Rooty Toot Toot, and the admirable legs—the legs, I said— displayed by Jane Russell as Bob Hope’s ferocious girl friend in Son of Paleface.

And after many years of daily invasions of the balcony I still find that the good movies stand out a lot more vividly in my memory than the bad ones. Furthermore, my conviction deepens that the muchabused film industry, hamstrung though it often is by stale formulas and commercial short-sightedness, probably comes up with a higher percentage of superior material than the book publishers, the baseball leagues and the so-called legitimate theatre—to mention only a few of the rival diversions.

These Were The Ten Worst

DOWN AMONG THE SHELTERING PALMS

THE UNKNOWN WORLD BRIDE OF THE GORILLA

WORST PERFORMANCE BY AN ACTOR: Tab Hunter as Linda Darnell’s teen-aged Marine in Island of Desire.

WORST PERFORMANCE BY AN ACTRESS: Anne Francis in the title role in Lydia Bailey.

CORNIEST SPOKEN COMMENTARY: Cecil B. DeMille's in The Greatest Show on Earth.

These Missed First Ten But Were Good Entertainment

OUTCAST OF THE ISLANDS

WITH A SONG IN MY HEART THE NARROW MARGIN THE SNIPER

THE IMPORTANCE OF BEING EARNEST

BEST ACTOR: Charles Chaplin, as the faded clown in Limelight. He also rates as 1952’s best all-round moviemaker for his multiple chores in that picture.

BEST ACTRESS: Shirley Booth, as the slatternly housewife in Come Back, Little Sheba.

MOST IMPRESSIVE NEWCOMER, FEMALE: Claire Bloom as the ballerina in Limelight.

BEST PERFORMANCE BY A JUVENILE: Mandy Miller in title role as deaf-and-dumb child in The Story of Mandy, directed by Alexander Mackendrick.

BEST SCRIPT ADAPTED FOR THE SCREEN FROM ANOTHER SOURCE: High Noon, written by Carl Foreman and based on a short story by John W. Cunningham.

MOST THRILLING AVIATION SHOTS: Breaking Through The Sound Barrier, an excellent British item.

BEST MOVIE FIGHT;Robert Taylor (with battle-axe) versus George Sanders (with mace-and-chain ) in Ivanhoe.

BEST PERFORMANCE BY AN ANIMAL;The title-role lion in Fearless Fagan.

AMONG OTHER PERFORMANCES GILMOUR ESPECIALLY ENJOYED

Katy Jurado as Gary Cooper’s Mexican ex-flame in High Noon . . . Charles Boyer as Bonnard père in The Happy Time . . . Charles Laughton as Soapy, the elegant idler, in O. Henry’s Full House . . . Ray Bolger as Charley in Where's Charley? . . . Edith Evans as Lady Bracknell, and Miles Malleson as the vicar, in The Importance of Being Earnest . . . Fred Allen and Ginger Rogers as the disenchanted radio lovebirds in We’re Not Married . . . Alec Guinness as Denry Machin in The Promoter . . . Marlene Dietrich as the middle-aged temptress in Rancho Notorious . . Alastair Sim in bit role as a frustrated film producer in Lady Godiva Rides Again . . . Broderick Crawford as the breezy undercover detective in The Mob.

Because You’re Mine: Lanza operatic

I Believe in You: Drama. Good.

Never Take No for an Answer: Italian

You for Me: Hospital farce. Fair. 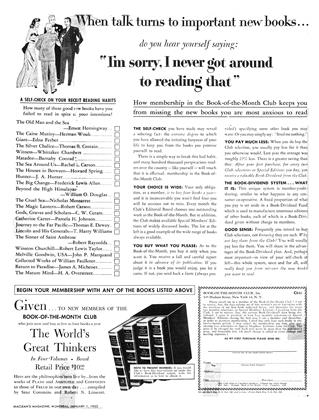