ONE THING I’ve always been terrified of is being invited to appear on a quiz program. I have visions of myself sitting there in absolute red-faced silence for a solid half hour while my colleagues, whom I’m letting down horribly, look at me with puzzled little smiles.

For instance, I can imagine them asking me something about the American Civil War, which I missed at school because I was having my tonsils out. I know that Lee, Jackson and Sherman were quite prominent in it, but I don’t know what side they were on or who won, and I usually associate the whole thing with cigars, old southern hotels and the names of towns I’ve tried to find fan belts in.

Another thing, no matter how I purse my lips and make little tents out of my fingers, t he British North America Act is, for me, a lot of men in a line-drawing planting flags, and a guy named Rodney Charles who always said he could lick me and was quite right. I wouldn’t know a Second Chamber from a caucus, and God knows I never knew what a caucus was.

I realize now that, most of my life I’ve been too busy high-stick handling, shouting back at streetcar motormen and catching the odd glance at a pair of pretty legs to pick up much wisdom, knowledge or many leather-bound books.

One resolution I made early in life was to form the dictionary habit. Make use of a word three times and it’s yours. I remember I looked up paleontological. That was seventeen years ago and I’ve never found three sentences I could use it in yet. I tried it once. I got. into an argument with a young intellectual who was crowding me too close and batted him back with “Possibly, except that much of it is rather paleontological.”

My wife, who was passing toasted cheese sandwiches, looked up quickly as if thinking “Good heavens, what won’t he come out with next?” and I began to wonder whether I’d used the right word or whether it was something I’d read in a book called The

Scientific Side of Marriage, and I sat there blushing for the est of the night.

One word that has been appearing like a sudden soft spot in a country road for me is laissez faire, which I always connect with a young man with a green cigarette holder saying “Oh, laissez faire, laissez faire." I never did know the meaning of a “categorical no” and a “definitive biography” or “belles lettres."

In geography I can never remember what exactly happens after I get past the east end of the Mediterranean except that when I was a boy my map used to gel very pink, and a little girl named Gladys Walter who was always getting her curls in my inkwell, marking up her tunic and reporting me to the teacher who regularly came down and belied me.

The Right Angle on Triangles

Yet. along with all the stuff I’ve forgotten I remember the damnedest things. For instance, I’ve always remembered that the square of the hypotenuse of a right-angle t riangle is equal to the sum of the squares of the other two sides. All my life I’ve had a vague hope of finding someone trying to figure out how big the square of the hypotenuse of a right-angle triangle is, maybe kneeling on his lawn, his wife calling him for supper, looking worried, frustrated and stuck. And then I step up smiling. “Having trouble?”

He shakes his head, “I can’t for the life of me figure just how big this square should be.”

I look into his eyes. “Really?” I say. “The square of the hypotenuse of a rightangle triangle is equal to the sum of the squares of the other two sides.”

Another thing I remember is how to find the height of trees by triangulation. And if I ever find six men t rying to pull a log down to the bank of a river with a rope and a pulley attached to a tree I’ll simply attach the pulley to the log instead of the tree, and tell t hree of t hem to go home. ★ 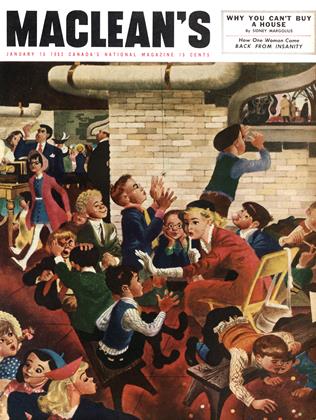