DANGEROUS WHEN WET: Esther Williams as a Channel swimmer, Fernando Lamas as a French champagne salesman who adores her, in a frothy water-musical which adds up to quite a bit of fun.

THE GIRL NEXT DOOR: This was the last movie June Haver made before entering a convent. Almost any of her earlier efforts might have been a worthier adieu to her public, although Dan Dailey and Dennis Day contribute a few lively moments.

IT CAME FROM OUTER SPACE: Except for the gimmick value of fairly good 3-D photography and the reassuring thought that other planets may not want to destroy Earth, this is a quite conventional specimen of science fiction on the screen.

THE PRIVATE LIFE OF HENRY VIU: Watch for this 1933 British item if it pops up in your vicinity as a reissue. It compares advantageously with most of the current crop of historical comedy-dramas.

SOMBRERO: A rambling, overcrowded chronicle of events both

SOUTH SEA WOMAN: Marine Sergeant Burt Lancaster's courtmartial introduces a series of flashbacks explaining how he and a buddy (Chuck Connors) got mixed up with a show girl (Virginia Mayo) on a tropic isle. Funny in spots, but it tries too hard.

TIMES GONE BY: There are nine separate stories in this Italian

Man on a Tightrope: Drama. Good. 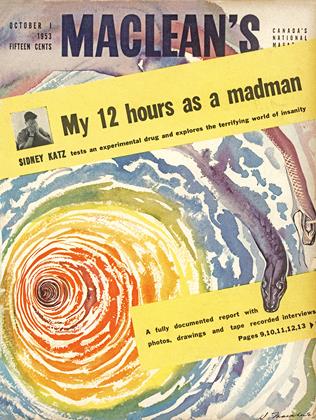