SERIOUS, chubby little man with a round pink face and thinning blond hair, named Donald Charles Frederick Messer, often remarks with a trace of bewilderment, “There’s something about my music that seems to upset the emotions.” As the fiddle-playing leader of a successful old-time orchestra known as Don Messer and His Islanders, he has had occasion to witness the truth of his remark. There have been times when Messer’s music has literally brought down the house.

Twice, for example, when the Islanders played in Woodstock, N.B., a veranda collapsed under the pounding of dancing feet keeping time to such spirited scherzos as Flop-Eared Mule, Big John McNeil and Little Burnt Potato. In Kennetcook Corner, N.S., two men had to hold up the roof pillars when the floor started to sag crazily under the impetus of Jimmy’s Favorite Pig. In Hopewell, N.S., when the pillars toppled over they were simply tossed out of the window and the whoopee went on to the tune of Spud Island Breakdown.

Then there was the time when the Islanders were enlivening the Glace Bay Forum and a coal miner tapped a comrade on the head with an empty bottle. This incident soon mushroomed into a full-scale riot. The battle was still in full swing when the police arrived, and Messer was still sawing away

on The Joys of Wedlock. Another time, the Islanders visited Iona, Cape Breton, to play for dancers who came in by chartered train from Sydney. The law required that they quit at one a.m. There were angry mutters of protest when the music stopped and having nothing else to do the dancers began to fight. Messer fled to the band’s trailer and locked himself in until train time at 5 a.m. The fight was still going when he departed.

The emotions inspired by Messer’s music once ended in tragedy. Several years ago W. W. McTaggert, of Pilot Mound, Man., wrote Messer that his greatest ambition in life was to call a square dance for the Islanders. When they played in Pilot Mound some time later Messer let him fulfill it. Halfway through the first number he realized that

the middle-aged westerner chanting his spiel a beat ahead of the music was the finest caller he’d ever heard. When the tune ended the Islanders joined in the applause. McTaggert. stepped back, beaming, and fell over, dead. Doctors said his heart attack was brought on by the excitement. Since then, Messer has insisted that all callers not known to him personally must undergo a medical checkup before performing with the Islanders.

It would be an exaggeration to suggest that such incidents are daily occurrences wherever Messer moves, but they do indicate the special impact that he and his seven musicians make on the world of the square dance. The Islanders —some of them have been offered jobs by Hollywood, Benny Goodman, and the Boston Pops Orchestra have been grinding out the bumptious beats of jigs, reels and breakdowns on the CBC since 1939 and the program now gets more fan mail—twelve thousand letters last year—than any other show except The Happy Gang. As much of it comes from south of the border as from the ten provinces. There’s Rev. Emerson J. Sanderson of Fargo, North Dakota, for example, who has his wife record the program if he’s out when it comes on. There is Willett Randall, operator of a game preserve in the Adirondack Mountains of New York, who writes regularly once a month (“Last time you played Redwing our boys stomped the pine knots through the men’s-room floor”) and there is the man in Perth, Ont., who after hearing Messer’s vocalist, Marg Osborne, sing one night instantly telephoned a proposal of marriage. (He was too late; Marg was spoken for.)

That jangling noise in the background of Messer’s music sounds suspiciously like coinage. After years of comparative famine, the Islanders now gross about eighty thousand dollars yearly from radio, record royalties and personal appearances. Much of it is harvested in cities like Toronto and Ottawa where, only a few years back, country-style music was slightly less popular than Fijian war chants.

Messer’s following extends to the most unexpected places. When Queen Elizabeth, wearing a gingham skirt, whirled in square dances at Rideau Hall, one of the numbers was Don Messer’s Breakdown. Before she left Canada she asked for several Messer records to take home. The Islanders were extolled in the Canadian Senate by the late Sen. William Duff, of Lunenburg, N.S., and CBC commentator John Fisher once castigated the P. E. I. government for not striking medals for “those wonderful Canadian ambassadors.”

The Islanders are more frequently pictured as a band of rubes but this is pure fiction. Messer, a professional fiddler for thirty-six of his forty-three years, wears expensive but conservative suits, lives in a modern ranch-style bungalow with his wife and two daughters, and drives about Charlottetown in one of the three cars he owns. Charlie Chamberlain, the Singing Islander, was a lumberjack in the northwoods of New Brunswick before he first ambled up to a microphone; bass-player Julius (Duke) Neilsen, clarinetist Rae Simmons and trumpeter Harold MacRae began with Salvation Army bands. Neilsen was also a circus roustabout, fire-eater and classical musician. Vocalist Margaret Osborne is a housewife and drummer Warren MacRae, Harold’s brother, is a bachelor of science.

In spite of their increasing popularity, due in large measure to the increasing popularity of square dancing, the Islanders have their share of critics, divided into two camps. In one is a considerable number who hold that all old-time music sounds the same, i.e., like a rusty hinge. In the other, oddly enough, are those who love the old tunes but find the Islanders treat them irreverently. Whereas most old-time bands rely on such basic

instruments as the fiddle, banjo, jew’s harp and washboard, Messer’s includes piano, electric guitar, clarinet and trumpet. Leaving nothing to chance, he writes detailed arrangements, though three of his sidemen can’t read a lick of music.

Kennedy, who pays them, says, “You’ve got to judge the Islanders by the kind of music they play. It’s great—for hillbilly stuff.”

his work is called hillbilly or western, as it so often is. “It is folk music,” he says, “the music of the people. Our forefathers brought these hornpipes, jigs and reels over with them from the old country—Scotland and Ireland and they kept them alive.”

The Messer family of Tweedside, N.B., helped. Two of Don’s uncles played the fiddle; so did his two older brothers. The youngest of eleven children, Don was known as The Runt. “At home when the neighbors came round in the evening,” he says, “they’d get their fiddles out and play till all hours. I just listened.”

One winter when he was five years old and his brothers had gone away to work, he pried the hinges off their fiddle cases. “My mother would hum the old-time ditties to me and I picked them up from there.” When he was six, his father took him to a barnraising frolic where, on a fiddle almost as large as himself, he played Haste to the Wedding. Within a year he was averaging thirty dollars a week from neighborhood shindigs.

Messer’s first fiddle came from one of his brothers, who paid $1.98 for it. Later he sold packaged seeds and sent in the wrappers to a contest that offered a violin as one of the prizes. It arrived broken into pieces. When Big Alex Little, an itinerant hawker who sold horses and violins, passed through Tweedside, young Messer bought a fiddle from him for ten dollars.

Playing at a barn dance, he stood alone on a soapbox, fiddling away while the dancers sashayed around him and a dancer called, “Pay no mind to your arthritis, make like you was old St. Vitus.’*’

“Flies and mosquitoes used to light on me,” Don remembers, “and I couldn’t stop playing to swat them. I always looked like 1 had measles.”

All the same, Messer felt there was no future in fiddling. At sixteen he set out for Boston to live with his Aunt Maisie and work in a five-anddime store. Professor Henry Davis, a retired piano and violin teacher, occupied the room under Messer’s. “He heard me playing one night and told my aunt, ‘That boy has a gift.’ He wanted to know if I’d done anything about my music. He flew right at me when I said I hadn’t.” Under Davis, Messer studied for two years and learned to read music. Then he had a nervous breakdown and went home to recover.

Messer next showed up in Saint John in 1930. A fishmonger there used to sponsor a radio program of classical music. Don tucked his fiddle under his arm and went to see him. Soon he was substituting for the classics on Station CFBO.

It was in the mid-Thirties that Charlie Chamberlain and Duke Neilsen teamed up with Messer. There may be World War I veterans on hand today who remember a curlyhaired youngster who used to appear by the tracks and sing patriotic songs as the troop trains halted at Bathurst, N.B., scurrying for pennies without dropping a note. That was Charlie. After he got out of fifth grade he headed for the woods and became a lumberjack. In the logging camps at night the men would gather around a stepdancing platform improvised from barrel staves. Someone had a mouth organ, someone else banged a spike on a horseshoe and Chamberlain strummed 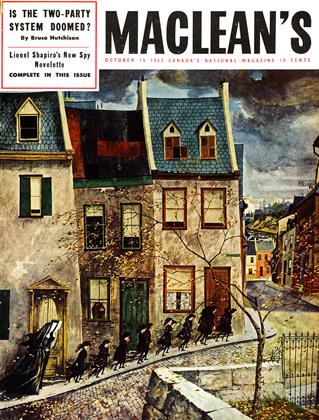