THE 5000 FINGERS OF DR. T. This flashy, pretentious fantasy might have made a diverting short but as a full-length feature it soon begins to sag. Its plot premise, a dubious one, is the irresponsible notion that all small boys hate good music.

FROM HERE TO ETERNITY: One of the year's best movies is this strong but tasteful adaptation of James Jones' savage novel about army life in Honolulu just before the Pearl

Harbor raid. The story is a bit too crowded and episodic, but immensely gripping. Director Fred Zinnemann, who made High Noon, has a fine cast including Montgomery Clift, Burt Lancaster, Frank Sinatra, Deborah Kerr.

THE GLASS WALL: Spectacular photography in and atop New

York’s United Nations building is the most rewarding feature of this hectic pursuit drama about an illegal immigrant (Vittorio Gassman) on the lam in Manhattan.

THE GREAT SIOUX UPRISING: A corny western, burdened down with stilted dialogue and stagey characterizations.

INNOCENTS IN PARIS: A carefully-assorted lot of Britons spend a

week end in the French capital. The script is crammed with almost every imaginable cliché about wicked, fascinating Paree, but the incomparable Alastair Sim is very funny as an English diplomat whose secret weapon is his vast capacity for vodka.

THE MASTER OF BALLANTRAE: A happy ending has put Robert Louis Stevenson's famed novel into Technicolor soft-focus, but the net result is still a fine swashbuckling sword-opera, with Errol Flynn suitably cast as an eighteenth-century Scottish daredevil.

drama, here proves equally adroit in handling a gay romantic comedy. Filmed in photogenic Rome, it’s about a newspaperman (Gregory Peck) and a rebellious princess (Audrey Hepburn) who “do the town” together. Miss H. is an English actress of uncommon charm and talent.

THE TITFIELD THUNDERBOLT: A cheerful English comedy about a village and its beloved branch railway. Farcical ingenuity runs a bit thin in spots, but Stanley Holloway and other droll chappies account for a good number of chuckly moments.

Charge at Feather River: Western in

Man on a Tightrope: Drama. Good. 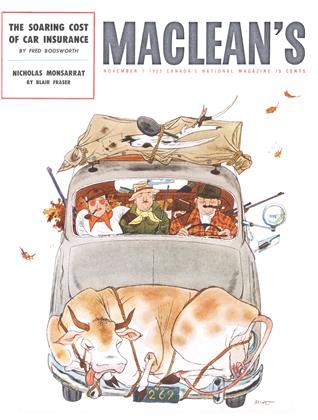