REPLACMENTS for the 27th Brigade, now being moved to Germany, are reported to be of better quality than the much-criticized troops who are ending their tour of duty there.

Officially, of course, National Defence follows the Chief of the General Staff in denying that there’s any truth in the criticisms of Lionel Shapiro in this magazine, Ross Munro in Southam Newspapers, and Bill Boss through the Canadian Press. Unofficially, at less exalted and more realistic levels, the army has not pretended that the 27th Brigade was much of a showpiece. These officers don’t agree with Shapiro’s low opinion of the troops’ military efficiency, but they admit that most of what he said is true.

They add, however, that the flaws are being mended. The new 27th Brigade had a longer training period in Canada than its predecessor. The worst of its misfits were weeded out at home; previously, the same type had to be carried on strength in Germany because there was nowhere to put them, except in the overcrowded guardhouse. Also, the army has been able to use a slightly finer screen in picking the men now on their way overseas.

The new provision that soldiers’ families may go with them is expected to make a big difference, too. The general level of behavior will rise, and the VD rate will fall. Army Public Relations has not been able to make much of this point, because the public is allowed to assume that only single men get VD, but the improvement, when it comes will speak for itself.

WHETHER it’s mentioned or not in the Speech from the Throne, a reform of parliament’s rules will probably take place at this session.

You may think this a matter of no public interest, but you’re wrong. It’s probably the most important thing parliament will do all winter^ It’s the longest step toward making Canadian democracy work since patronage was abolished in the civil service. It may even do what the Opposition has been clamoring for, and restore the authority of parliament.

Not that Opposition MPs will think so. The immediate effect will be to make some of them stop talking. Only one change in rules will make any real difference, and that’s a rule for allocation and limitation of time for debates.

Opposition MPs won’t like it. They will call it a barefaced attempt to muzzle parliament, imposed by a dictatorial Government with the aid of its servile majority. Yet in the long run it’s the Opposition that suffers most from the state of verbose paralysis that parliament is in now, and the Opposition that will gain most from reform. That is the real reason why nothing’s been done about it before.

As it is, legislation is debated until the last back bencher has had his full forty minutes’ say. The Government has no control of the duration of debate. As former House Leader Alphonse Fournier used to say, “We pick the date when parliament opens and they pick the date when it closes.”

But although it can’t shut off the stream of oratory, the Government can and does rely on the orators to go on talking. It brings in the legislation that it wants, and eventually that legislation is passed. By then there is not enough time for a real debate on the things the Government doesn’t want debated—the estimates.

Control of the estimates, the spending of public money by the Queen’s ministers, is historically the most important function of the House of Commons—the right for which Hampden and Pym fought King Charles I. Any government which attempted to limit that right would be defeated in the House and repudiated by the country. Yet every Canadian government can frustrate this sacred right of parliament by the simple device of letting parliament talk itself to death.

Estimates are always the last thing on the agenda of every session. They come before a tired, jaded House, anxious to get off home. The same members who talked for three or four weeks on the Address in Reply to the Speech from the Throne, or for day after day on a motion to go into supply, now glare at anyone bold enough to question a million-dollar item as it rolls through.

Prime Minister King used to take advantage of this quite deliberately. He had no interest in proposals for reforming parliament—he knew exactly how to handle parliament as it was, and he had no intention of making changes which might make parliament harder to handle.

Prime Minister St. Laurent has had a different attitude. He is less conscious of his place in Canadian history, but he has—according to people who know him well —one modest ambition. He wants to tidy up the messy administration of Canadian public affairs.

Already he has done a great deal on the ninety percent of the iceberg which is below the surface —the organization and procedure of the civil service and the Cabinet. Several years ago he indicated a hope that he might be able to do something about parliament.

Two successive Speakers have tackled the problem. Hon. Gaspard Fauteux, now Lieutenant-Governor of Quebec, went abroad to study the rules of other parliaments, but nothing happened here. Hon. Ross Macdonald headed a succession of all-party committees in the last parliament, trying for unanimous agreement on reform. All he got was a slight change in parliament’s hours of sitting. Macdonald was the most popular, tactful, conciliatory Speaker the House had had for years; it was generally admitted that if he couldn’t get unanimous agreement, nobody could. The only course left was for the Government to assume responsibility for the change.

For obvious reasons, the Cabinet didn’t want to do it before the election. Indeed, most of the Cabinet would just as soon not do it at all. But since the election, three ministers have formed themselves into an informal and unofficial Cabinet committee which will, they hope, get something done.

Walter Harris, the new House Leader, would like to see the House more efficient under his guidance. Brooke Claxton has been interested in reforming parliament since he was a freshman MP, when he was brash enough to write an article about it for Maclean’s. Jack Pickersgill, Secretary of State, has never sat in parliament before but has had to listen to parliament for fifteen years, a strain on his patience which he is not likely to forget. These “Three Musketeers” hope to work out a set of

changes that the Prime Minister and their colleagues will accept.

They expect the Opposition to denounce whatever is proposed, but they think the Opposition’s front benches will secretly welcome it. The leaders realize quite well what harm is done to parliament and their party by the interminable droning from behind them, but their party discipline isn’t strong enough to prevent it. Liberals can be made to keep quiet by a patronagedispensing Government, but no one on the Speaker’s left has enough authority to tell a voluble MP that he must not talk.

Once the debating time is allotted by the Government, the Opposition leader and the Opposition whip will be tremendously strengthened. They will know they have just so many hours to fill, and they can pick a team to fill them. If anyone else wants to talk, he’ll have to show why his views are better worth hearing than those of the man he displaces. Also, individual members can be rationed to ten-minute or even five-minute shares of the party’s allotted time, instead of taking forty as they can now.

ANOTHER “MUST” on the agenda of the present session is a raise in pay for members of parliament.

This will probably not be mentioned in the Speech from the Throne, and may not even be taken up until after Christmas. It is a certainty for some time this session, though. Many a

Liberal MP refused to run again until his Cabinet minister promised a substantial boost in the indemnity.

MPs now get four thousand dollars in sessional indemnity, two thousand dollars as a tax-free expense allowance. Out of this expense allowance they must pay for a second dwelling, for themselves if not for their families. They must also pay for such odds and ends as buying lunch for visiting constituents, which a businessman would charge to his company. The MP must be a leading and cheerful contributor to all the local charities. Finally, IK; must keep up a respectable standard of living both at home and in Ottawa.

For most members, this costs more than six thousand dollars a year. Few are rich men but most have a bit pul by when they come here; they say thensavings shrink instead of growing with each year in politics.

A dramatic and moving example is the estate of the late Gordon Graydon, Conservative MP for Peel County, who died in September. Graydon was a member of one of the leading law firms of Brampton, Ont., with which he could have made a more than comfortable living and left his family well off. He was also a member of parliament, and a good one—so good that politics took up practically all his time. He didn’t have a chance to work at profitable legal business, because he was too busy working for his party and his country. His entire estate consisted of the small amount of insurance that he was able to get (his health had been poor all his life) and his friends are now raising a fund to help his family.

Nothing official has been said about the amount of the increase, but the general expectation is that it will be raised to the level of a two-session year —i.e., eight thousand dollars in salary plus the existing two thousand for expenses. ★ 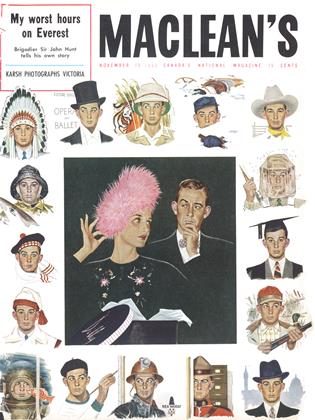