A GIFT FROM YOUSUF KARSH

ON THESE and the following pages Maclean’s presents a gallery of the famed Polish masterpieces evacuated under German fire and brought to Canada for safekeeping at the outbreak of the war. In 1948 while Free Poles and Red Poles wrangled over possession Premier Maurice Duplessis of Quebec sequestered the treasure and placed it in the guarded vaults of the Provincial Museum on the Plains of Abraham. The collection, valued at five million dollars but beyond price as an ancient nation’s heritage, includes jeweled weapons, gold-decorated armor, ornaments of precious metals and one of the world’s largest and finest collections of medieval tapestries.

In their long and eventful history the heirlooms have been fought over, stolen and scattered. A century and a half ago when Russia took possession of a large part of Poland the treasure was seized. It was returned after World War I, somewhat the worse for wear and desecration.

When Yousuf Karsh was photographing Quebec City for Maclean’s last summer he remarked to the Premier: “It’s a shame so much beauty should be hidden from the world.” Behind the seemingly casual comment was an ardent desire to train his color cameras on this unique subject. Duplessis’ agreement launched Karsh on one of his most difficult—and most rewarding assignments.

He learned that two keys are needed to open the treasure vaults; one held by the Quebec government and the other by Joseph Polkowski, the custodian who brought the heirlooms from Poland and who has remained near them ever since. Polkowski remembered that Karsh had photographed the Polish government-in-exile in London, and was delighted to co-operate.

But since agents of Red Poland had more than once tried to hijack the treasures, their removal from the guarded vaults to be photographed had to be carried out in deep secrecy. The co-ordinated help of many was required: Free Polish representatives,«Quebec provincial police,

museum authorities, the Quebec Film Board, trusted electricians and discreet Quebec City merchants who would supply suitable background materials. It was September before everything was ready.

Karsh and his party were whisked from the Premier’s office to the museum and admitted through a guarded rear door. Credentials were exchanged, keys were produced, and the heavy vault doors were swung open to reveal the stout cases in which the treasure lay.

Karsh admits that his heart skipped a beat as the cover was thrown back from the first chest. The armed police pressed close to see for the first time what they had been guarding for five years. Then Karsh and his crew, plus volunteer helpers, went to work. For four days and nights, with breaks for food and sleep, they performed the labor of art which resulted in these pictures. Maclean’s readers are the first to see them.

MATCHED only by Michelangelo’s Sistine Chapel frescoes asa magnificent depiction of Old Testament drama, this tapestry of I he Flood is so large that its reproduction on t hese two pages is the first sight of it hy man in one glance of the eye. Its dimensions are twenty-eight feet by fifteen. Woven with gold, silver, silk and wool threads, it was designed by Michael van Coxie, the great Flemish romantic artist, and executed hy a team of master weavers. It was one of a group of tapestries commissioned in Brussels for the palaces of King Sigismund August II of Poland af the time of his marriage to Catherine of Austria in 1551. The order took twelve years to

complete. So famous did the beauty of the tapestry become that other courts of Europe ordered copies, but none approached the original in brilliance, color and exquisite design. To enable Karsh to do full justice to this and other tapestry masterpieces the PublicWorks Department of Quebec erected a great plywood wall thirty by forty feet, and a system of grips and pulleys was devised to hang the tapestries without tacking or manhandling. For most of two nights Karsh worked on a movable platform under a battery of floodlights. When The Flood had been photographed, a policeman guarding if whispered: “Please leave it up a little longer it is so beautiful!”

BOTH PRUDERY and vandalism have laid heavy hands on many of the Polish art treasures, but their enduring beauty could not be marred. Examples are seen in the details from the tapestries pictured on the opposite page. With the coming (if the Counter Reformation — the reaction against the liberalizing influence of the Reformation —church authorities in Poland condemned the nude figures in Michael van Coxie’s magnificent tapestries to be “dressed” and leaves were sewn on Adam and Eve.

When a large part of Poland was divided between Prussia and Russia at the end of the eighteenth century, Russia seized the contents of Poland’s traditional treasure-house, Wawel Castle, at Cracow, and removed them to Russian palaces. Priceless tapestries which did not happen to fit the walls on which the Russians wished to hang them were cut to size. The tapestry of Cain and Abel reproduced at right, for instance, was slashed lop and bottom, patched and stained.

Suits of armor and ceremonial robes survived captivity with little or no damage. The robe of a Knight of the Holy Ghost shown on this page (Karsh draped it on the tallest of the police guards to achieve a lifelike appearance) is the regalia of what was probably the most exclusive knighthood ever established. The order was founded by King Henry III of France in 1573, and to attain it a candidate had first to be a knight of the French Order of St. Michael and a noble of at least three other nations. The ceremonial robe shown was presented by Louis XIV of France to King -Jan HI of Poland in gratitude for his help in resisting the siege of Vienna in 1683. The tongues of fire which cover the robe are of highly raised silver embroidery.

The suit of armor seen on this page is one of five in the Polish collection and was handed down from generation to generation of the noble Uniechowski family. With it was worn a ceremonial sword, designed to be used for one purpose to finish off an enemy after he had been cut down by a utilitarian cavalry sword. The most valued of the swords in the Polish collection is not in the Quebec museum, but in the vaults of the Bank of Montreal at Ottawa with two other cases of relics. This is Szczerbiec, “The Notched Sword” which has been used at the coronation of Polish kings for eight centuries and corresponds to Britain’s Stone of Scone.

Many of the original manuscripts of Frederick Chopin’s immortal compositions are also amopg the treasures.

In 1939, when Hitler marched into Poland without warning to start World War II, the heirlooms were once more in imminent danger of seizure. Hastily they were packed into thirty-five crates and carried by barge, horse-drawn wagon and army truck through Rumania to a Black Sea port. There they were loaded on a ship and taken to France. When the German invasion of France again menaced the collection, the treasures were once more collected and moved to safety —this time across the Atlantic to Canada where they’re guarded. ★ 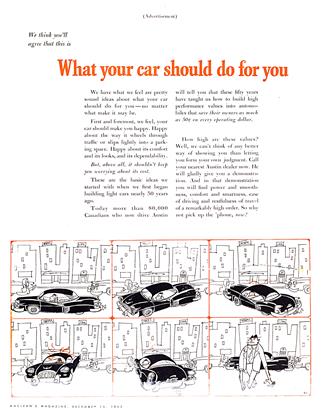