BLOODHOUNDS OF BROADWAY: An

amiable little musical, derived from a Damon Runyon tale. It has to do with a big-time bookie (Scott Brady) whose honeychild sweetheart (Mitzi Gaynor) is guarded by a pair of sad and funny dogs. Miss Gaynor sings and dances fetchingly, and Wally Vernon is amusing as a hypochondriac mobster.

of Britain’s best moviemakers, director David Lean and writer Terence Rattigan, join forces in what is probably the finest aviation film ever made. The excellent cast includes Ralph Richardson as a dedicated manufacturer of fasterthan-sound aircraft, Ann Todd as his anxious daughter, and Nigel Patrick as her husband, a test pilot.

THE CRIMSON PIRATE: An enjoyable burlesque of buccaneer action mellerdrammers. Burt Lancaster and Nick Cravat have the time of their lives as a pair of acrobatic sea-devils, and William Alwyn's rollicking musical score offers incidental pleasure.

HORIZONS WEST: Not even the nightclub comics who make fun of movie dialogue have often dreamed up cornier stuff than some of the chitchat in this pretentious western, starring the able Robert Ryan as a southern cattle baron in the 1 860s.

LIMELIGHT: Neither a comedy nor a tragedy, but something in between, Charles Chaplin’s new film drama succeeds in being either hilarious or deeply touching in its better moments. All told, I think it’s a picture to cherish. A forgotten clown (Chaplin) and a discouraged ballet dancer (Claire Bloom) are the principals.

MEET ME TONIGHT: Three of Noel Coward’s playlets from Tonight at 8.30 are here packaged into one standardlength movie. The format resembles the justly admired Somerset Maugham bundles from Britain, but falls considerably short of them in grace, wit, and cinematic vigor. Stanley Holloway, however, impressively portrays a henpecked man who finally rebels.

MY WIFE’S BEST FRIEND: A coy and

contrived domestic comedy. Husband Macdonald Carey, in a moment of stress, confesses to wife Anne Baxter that he once had a secret fling with her favorite girl friend. The wife’s prolonged revenge spins out a dull, predictable chronicle.

OPERATION SECRET: Bogged down by interminable "flashbacks," this is a rather confusing story about derring-do in the French underground during the Second World War. Its best shots— and they are quite fascinating—-are from official German films of wartime experiments with robot missiles and jet planes.

OUTPOST IN MALAYA: The precarious relationship between a dogged planter (Jack Hawkins) and his frustrated spouse (Claudette Colbert) is drastically tested when fierce bandits invade their diggings. A British film, slow at first but fairly gripping at the finish, and enlivened by sharp on-the-spot photography.

another western, nowhere near High Noon in quality but still better than a lot of ’em. He appears as a rocklike Union officer who lets himself be kicked out of the army in disgrace in order to cloak his future activities as an undercover operative. Paul Kelly is good as an enigmatic colonel.

VENETIAN BIRD: The photogenic canals and streets of Venice impart at least a surface realism to an otherwise murky and stereotyped story about a British private detective (Richard Todd) awhirl in a nest of thugs, assassins and mysterious women.

African Queen: Adventure. Excellent. Because of You: Drama. Fair. 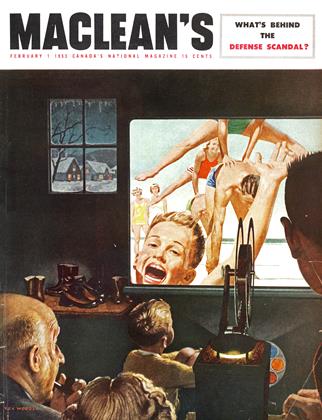