APRIL IN PARIS: The nimble amiability of Ray Bolger and the Gallic drollery of Claude Dauphin combine with some pleasant singing by Doris Day to make this a diverting slaphappy musical, although the story is often more foolish than effervescent,

story about a Red-hating American newsman (Dana Andrews) trapped behind Ihe Iron Curtain and accused of espionage. Some of the apparatus of psychological warfare is interestingly shown, but few of the characters come to life on the screen. With George Sanders, Marta Toren.

HACE TO FACE: Two short-story classics — The Secret Sharer, by Joseph Conrad, and The Bride Comes to Yellow Sky, by Stephen Crane — are intelligently packaged in the best yet of Flollywood’s attempts to excel Ihe Maugham parcels from Britain.

THE I DON’T CARE GIRL: The considerable charm and talents of Mitzi Gaynor are shamefully wasted in this vague, rambling pseudo-biography of Eva Tanguay, the Betty Hutton of the 1920s.

THE LAWLESS BREED: The western badman whose challengers won’t let him retire is becoming a fairly threadbare figure in the films, but young Rock Hudson manages to be quite convincing in this assignment. Better-than-average frontier mellerdrammer.

THE LUSTY MEN: A good action yarn, burdened from time to time by excessive dialogue, about the professional rodeo circuit and the hardy horse-tamers who inhabit it. Robert Mitchum, Arthur Kennedy and Arthur Hunnicutt are among the rugged citizens on hand, along with Susan Hayward as Kennedy’s worried spouse.

PONY SOLDIER: Constable Tyrone Power of the pioneer Mounties keeps his scarlet tunic pressed and spotless amid all his rough encounters with rebellious Indians. Thomas Gomez is occasionally amusing as a cynical halfbreed guide.

ROAD TO BALI: Some of the roguish partners' mugging at the camera and sly personal "asides" may get on your nerves once or twice, but in most respects this is an acceptable sequel to all the previous "Road" farces with Bob Hope and Bing Crosby. Dorothy tumour's old sarong still fits her very handsomely.

Philip Sousa, the emperor of all the bandmasters, is impersonated by Clifton Webb in a cheerful musical. An overlong plot thread involving Young Love (Debra Paget and Robert Wagner) doesn’t interfere unduly with the rousing band-tunes that make the picture a lot of fun to see and hear.

THE STEEL TRAP: A fair crime-and-

suspense item about a bank official (Joseph Cotten) whose jittery wife (Teresa Wright) doesn't know that their "business trip" is really a scheme to steal a million dollars.

TOP SECRET: An enjoyable British farce. It tells of an innocent English plumber (George Cole) who becomes the temporary toast of Moscow because the Russians think he is an atomic traitor.

THE TURNING POINT: William Holden as a believable newspaperman, Edmond O'Brien as an investigator tackling a huge crime syndicate, Alexis Smith as O’Brien’s “girl Friday," in a somewhat conventional but interesting crime drama. An exciting chase sequence and an unexpected ending are assets here,

THE WOMAN’S ANGLE: Actress Claude Farrell's breezy portrayal of a manhungry Slavic ballerina is not enough to outweigh the numerous weaknesses of this garrulous British soap-opera. It's about a music-manager (Edward Underdown) and his tangled love-life.

Against All Flags: Pirate yarn. Poor.

Everything 1 Have Is Yours: Musical. Good dancing, poor story.

It Grows on Trees: Comedy. Fair'.

Something for the Birds: Satire. Fair. Springfield Rifle: Western. Good. 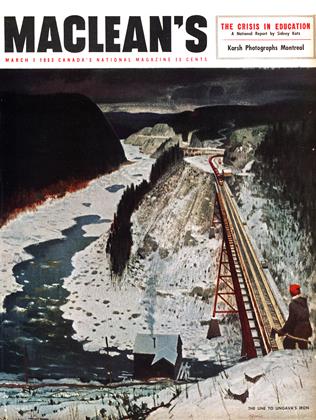