ABOVE AND BEYOND: Robert Taylor believably portrays Col. Paul Tibbets, the man who dropped the atom bomb on Hiroshima. The story is told with an admirable blend of excitement and decent sobriety. Less compelling is the officer’s endless fretful bickering with his wife (Eleanor Parker).

ANDROCLES AND THE LION: Canada’s Alan Young overclowns his title role in Bernard Shaw’s satiric comedy about a meek Christian tailor and his grateful pal, the pagan king-of-beasts. Much of the GBS wit, however, survives the grandiose movie expansion. Jean Simmons, as the wise and lovely Lavinia, is a joy to behold.

THE GENTLE GUNMAN: A British film, earnest and occasionally attractive but more often merely dull and muddled, about the struggle between hotheads and moderates in the rebel Irish Republican Army during the early phases of World War 2.

THE IRON MISTRESS: The impenetrable Alan Ladd switches with ease from guns to knives in this fanciful biography of Jim Bowie, American frontiersman. Plenty of violent action here, but it’s slowed down by an implausible romance with a Creole belle (Virginia Mayo).

MEET ME AT THE FAIR: Not a bad little Technicolor musical, corny of plot and sometimes sticky of sentiment but buoyed up by Dan Dailey’s engaging performance as a spellbinding medicine man who adopts a runaway orphan. ‘‘Scat Man" Crothers, a Negro comedian, kicks around several songs in lively fashion.

THE MISSISSIPPI GAMBLER: Tyrone Power tangles ^ stolidly with crooked cardsharps, southern aristocrats and the fair sex in a colorful, overlong adventure-rqmance up and down the Big River.

MY COUSIN RACHEL: Daphne du Maurier’s popular novel is translated into film with adoring attention paid to every glamorous cliché in the lady’s repertoire. In its own way, it’s all very handsomely done, with Olivia de Havilland as the enigmatic Rachel and newcomer Richard Burton as the nephew.

THE PRISONER OF ZENDA: A thoroughly enjoyable remake of the oft-filmed Graustarkian fable. Stewart Granger, James Mason and Deborah Kerr romp with gusto through its silly but diverting story about a weakling king whose valiant kinsman totally resembles him.

THE REDHEAD FROM WYOMING: Maureen O’Hara's Technicolor décolletage is a good deal more impressive than the fiat old plot that surrounds her. It’s the one about the saloon queen, the corrupt politician, and the honest settlers who ain’t lookin’ fer trouble.

Crimson Pirate: Action comedy. Good. 8 Iron Men: War drama. Good. Everything I Have Is Yours: Musical.

The I Don't Care Girl: Musical. Poor. It Grows on Trees: Comedy. Fair. 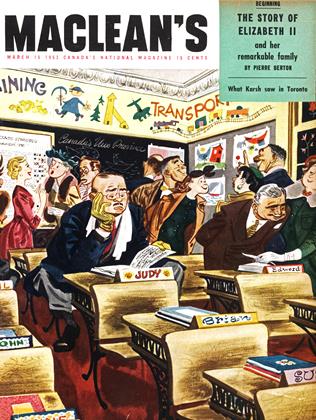