you, Too can try to Write short Stories ROBERT THOMAS ALLEN April 1 1953

EVERY NOW and then I come across one of those ads that assure me I can make easy pocket money by writing short stories, with a picture of some woman in Moncton who made a sale just last month.

I often fall for this, send a cheque, and soon I’m writing a story of my own. I always put it aside at about page eight, with a lot of respect for people who can keep right on to the end.

I’m not just sure where my trouble is, but I know it’s something to do with cigarettes. When I get a couple of people together in a room all I can do is have them look puzzled and do different things with cigarettes. Take this bit of dialogue, picked at random from a recent story of mine which I just burnt:

“Did you mean that?”

She took a cigarette from a package, lit it, and blew out the match. “Of course not. You know I didn’t.”

John’s eyes searched her face. He looked puzzled. He watched Anne’s cigarette. “Then—did you tell Tony that you were through?”

Anne watched him through the smoke from her cigarette. “I—think so.”

John lit another cigarette. “I don’t understand.” His eyes were haunted, tormented.

(This goes on for three pages.)

Dialogue like this, however, isn’t my worst problem. After all, I could have all my characters stop smoking. The real problem is having a story to tell. I never have a story to tell, although 1 don’t realize this until 1 get well into the first scene. I think 1 have

a story to tell. I certainly have the desire to sell one. Rut when it gets right down to it all I have is a husband and a wife who want to get divorced but can’t because of the children. All I have them doing is sitting looking at one another wishing they were divorced. Sometimes they pick up little objects around the room and, of course, they’re always lighting cigarettes and looking at one another. In real life this is what people do.

I know one couple who have looked at one another for fifteen years wishing they were divorced. Sometimes they pick up little objects around the room and, of course, they’re always lighting cigarettes and looking at one another. But obviously my story isn’t going to get anywhere unless I think of having them do something about it besides going around with a haunted, tormented expression.

I can’t think of anything except to have her standing around in an old bathrobe telling him her dreams. She tells him that she faded into her father-in-law, and then that a lot of people that she doesn’t know came in and floated across the room, and then she and a statue got into a fight about a carrot.

Or 1 have him sitting around making little marks on paper, lighting cigarettes and promising himself that he’s going to start cutting down on them tomorrow, trying to think of new expenses for his income tax, going into the bedroom and studying his chin in the mirror, looking at signs, jiggling change in his pants, and drinking malted milks.

If I try to liven the story up I have them get caught in a storm. All my plots end with either a storm or a fire or a prize fight, and I always get a note saying that this is really two stories, if not three, and the next time I plan on submitting my work would I please enclose a stamped self-addressed return envelope.

The only other thing I can think of having my hero doing is to join the navy, which is what I feel like doing around page eight. 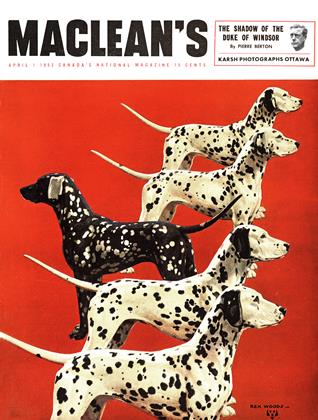