THE BLUE GARDENIA: Anne Baxter, a virtuous telephone girl on the rebound from a jilt, is afraid she killed a wolfish artist (Raymond Burr) while under the influence of his alcohol. Columnist Richard Conte leaps to her rescue. A routine mystery drama.

THE DESERT RATS: A sort of earlier-in-time sequel to Desert Fox, this is a Hollywood tribute to the defenders of Tobruk and has several satisfying moments. The story line, however, follows the oldie about the stern officer (excellently played by Richard Burton) who is “misunderstood” by his men. James Mason again appears as Germany’s Rommel.

THE LONE HAND: Some bracing long-shot views of handsome Colorado scenery are the most worthy elements in a slow corny western yarn about a rancher (Joel McCrea) whose loyal small son (Jimmy Hunt) has good reason to think Pop is a rustler.

THE PASSIONATE SENTRY: Not a top-drawer British comedy, but one with plenty of quiet chuckles. It's about a Cockney guard in St. James’s Palace (George Cole) whose dream-girl is a highborn beauty (Valerie Hobson) living in one of the Queen’s houses.

SCARED STIFF: Strictly for Martin & Lewis fans — another way of saying “not for me, thanks” — this latest of the zany partners’ adventures takes them to a haunted island near Cuba.

THE STARS ARE SINGING: Bob Williams, a very funny gent,

TROUBLE ALONG THE WAY: A campus football comedy starring John Wayne as coach. His brash little daughter (Sherry Jackson) may get on your nerves a bit, but much of the dialogue is clever, and old Charles Coburn is delightful as a priest.

City Beneath the Sea: Action. Fair.

The Girl Who Had Everything: Crime drama. Fair. 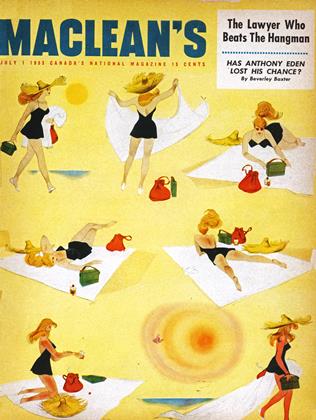