COUNT THE HOURS: Muddled and implausible, and with brevity as its one virtue, this is a detection melodrama about a lawyer (Macdonald Carey) who helps a poor fruit-picker escape a phony murder rap because the fellow's wife (Teresa Wright) is pretty.

THE GIRLS OF PLEASURE ISLAND: A fatuous but harmless tropical comedy-romance, aimed at the “family trade" in audiences. Three pretty English girls, living with their wifeless father on a South Pacific eden, are invaded by fifteen hundred of Uncle Sam's wholesome boyish Marines.

HENRY V: Don’t miss the current reissue of this magnificent and exciting Shakespearean film, produced eight years ago by Laurence Olivier. Like a cobwebbed bottle of the finest old wine, it has been improved rather than spoiled by time.

LILI: Coming from a studio (M-G-M) more renowned for expensive spectacles than for slender semi-fantasies, this is an astonishingly fragile and lovely film and is hereby highly recommended. It's about a charming but nonglamorous French orphan (Leslie Caron) who gently learns the facts of life and love from puppeteer Mel Ferrer and magician Jean Pierre Aumont in a traveling carnival.

MAN IN THE DARK: You have to wear special 3-D goggles to make visual sense out of this hackneyed crime melodrama. “Cured" by brain surgery, ex-criminal Edmond O'Brien is on the run — with Audrey Totter, his ex-moll — from both the law and the lawless.

TAKE ME TO TOWN: Vermilion O'Toole, a reformed bad-girl (Ann Sheridan), teams up with a two-fisted preacher (Sterling Hayden) and his three small shaggy sons in this mildly diverting Old West comedy.

24 HOURS OF A WOMAN’S LIFE: Is th.ere really such a thing as love at first sight? The question is argued interminably (and inconclusively) during the slow narration of a Mediterranean romance between a naïve widow (Merle Oberon) and a suicidal gambler (Richard Todd).

YOUNG BESS: Jean Simmons as England’s first Elizabeth, Stewart Granger as the dashing admiral she girlishly adored, Charles Laughton in a brief repeat of his 1933 impersonation of Henry VIII all at their best in a handsome Technicolor slice of semi-history. An enjoyable item.

The Girl Who Had Everything: Crime and romance. Fair.

No Time for Flowers: Comedy. Fair. 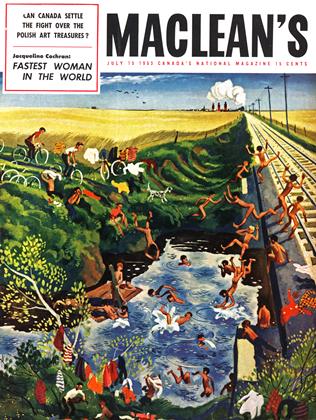