ONE OF THE characteristics of democracy is the manner in which a party in power seeks to deify itself in the eyes of the voters. We have an excellent example of that in this country. In the last few years because of our small population, vast wealth, and the way the rest of the world is going, the job of running Canada has presented approximately the same problem as keeping a roller coaster running on its rails. We had to get where we are. But to hear the Liberals talk you would think that they were the only humans who possibly could have got us this far alive.

In reality, they have been able to set the price of the ride and that is about all. If your pocket has been picked, your hat jammed over your eyes, and you have found the crew surly and highhanded, that, they say, is because running this roller coaster is a very tough job and passengers have no right to complain.

Some of you may say, and indeed one person in this Maclean’s discussion must be saying in nearby print, that the Liberals are right -only they could have brought us this far this fast. To believe that, however, you must believe that our politicians, rather than our land and its people and the lands and peoples outside of our borders, plot our destiny. But our war was a world war. Our boom is a world boom. The Liberals led us through war and into boom probably as well as any government could have done. But now they have become sick with the maladies of many another elderly government careless with our money and with their own manners and morals.

That is why my vote is going this time to the Progressive-Conservatives.

I hope it is obvious from the foregoing that my vote is anti-Liberal more than anything else. It is my first political bigotry and it will pass as soon as the Liberals are out of office in Ottawa. In previous elections I voted Liberal more often than anything else but Liberals seemed to govern then according to the principles applied by honest men to their own lives and friendships. Now if I thought Social Credit had a good chance of upsetting the Liberals I’d vote Social Credit; or CCF, if the CCF looked strong and seemed likely to provide a sane and moderate government. But I think that the Conservatives are the only opposition party with the power and tradition to capitalize fully on the undoubted anti-Liberal sentiment there is in the country now. I also think that with five years in office the Conservatives could dispel forever the myth that has been mainly responsible for keeping them out of power most of the time in the last thirty years—the myth held in Quebec that only the Liberals can be friends to the Canadians of Quebec. If this myth could be abolished, Canada once more would be a democracy instead of a nation governed by the autocracy of one political party.

Justice Minister Stuart Carson said in Saskatoon early in June that the issue of this election is St. Laurent versus Drew. I hope not too many people are fooled. Mr. Drew is unpopular in some places. Some people both in and out of his party admit that, while still believing in him. But even his most partisan supporters feel no need to urge the voters to look only at Drew and ignore the men behind him; the men behind him are good. Also, it isn’t necessary to be popular to be a good prime minister. Mackenzie King proved that. The Liberals won many elections in the past because people who disliked Mr. King were able to find men around him they could like. The Liberals now, if you can judge by Mr. Carson’s statement, would like to have the voters forget the men around St. Laurent and think only of him, the Prime Minister.

And yet one of the common arguments used by the Liberals when they are speaking out of the other side of their mouths is that the Liberal Party has the only men qualified to govern. They ask, where are you going to get another Claxton? Another Gardiner or Abbott? My answer is, such a thing is impossible, I hope. A man better than Mr. Claxton would have shown more concern about the Petawawa scandals, would have let someone else handle his business in France while he came home immediately to justify his appointments and policies which had left the door open to crooks. Instead the main wrath of public and parliament had to be spent shadow-boxing with substitutes. A man better than Mr. Gardiner would have fired the civil servants responsible for ignoring the first signs of foot-and-mouth disease and thus contributing to its spread, and then he would have told the facts frankly to a public whose right it is to know such facts. A man better than Mr. Abbott could not so blandly perpetuate the cynical coincidence by which in election years we are always given our most striking tax cuts, as if they’d been saved for that purpose.

The argument that only these men and their colleagues can run the roller coaster is an insult to the rest of us. In the world situation which has dictated Canada’s major policies since 1945 the Women’s Guild of the Anglican Church of Omemee, Ont., could have governed this country without disaster. I also think that any honest man could form a national cabinet from the first hundred men he met any Monday morning on the corner of Portage and Main in Winnipeg. That cabinet might have faults, like any other, but it would also have some virtues our present cabinet hasn’t got. Finding good men in this country is no problem. The problem is getting rid of the ones whose goodness apparently has run out of gas.

I make none of those statements facetiously. Our main national strength comes from our people. This strength normally will rise up through the government. Our major trouble at the moment is that the Liberals have been in office so long that they have set up a series of weirs and baffles which enables them to interpret our currents of opinion to suit their own desires.

One of the values of democracy is supposed to be change, periodic assaults by fresh eager minds on the nation’s problems. Continued on page 50

But C. D. Howe has been a cabinet minister in Canada for eighteen years, others of his colleagues also too long. Suiting their situations, some have become like the worst type of civil servant, dictatorially devoted to their own policies and practices. Who has not tangled with the inflexibility of this one type of civil-service mind at one time or another? And who has not felt the frustration of knowing what a vast mass of individual complaints it would take to remove a high civil servant from power? Still, some civil servants are fired from time to time and where it has been because of dishonesty their cases have been explored publicly. But in the political field where proof, if available, would hurt the party, no such public exploration took place in the recent uproar over a contracted named Lunam and his association with a Liberal member of Commons. The member was allowed to resign without any public official inquiry. I believe the public has a right to suspect that by closing off that case with a resignation the Liberals chose to shield from further examination the moral issues involved.

Look at the Conservative Party calmly. They have been out of power for eighteen years. In that time they have been as good a national Opposition as you could expect in a House of Commons where the Liberals couler listen to the Opposition for just long enough to appear to be observing the letter of democracy — then could go ahead and do what they were going to do anyway. By winning election after election the Liberals have become cocksure, ever more oppressive on opposition, with party discipline a substitute for genuine parliamentary rule.

I think the Conservatives in power would be different. For one thing, with the many new members they would need to form a government, they wouldn’t have the machine power of the Liberals within the House. Even in the party leadership there wouldn’t be the security enjoyed now by Liberal leaders. Nothing makes a good government as surely as strong opposition and within a political party the same principle must also apply. For years, particularly in the middle and late Forties when the British Conservatives were out of power, Churchill was never without the shadow of Anthony Eden, a friend and strong support—but also another strong potential leader for the British Conservatives. I think that a similar factor would work to make Mr. Drew a good prime minister. In addition to his vigor, comparative youth and his sure knowledge that his success or lack of it in office would govern his party’s fortunes for another twenty years, he would know all the time that if he did not do his job as well as his party and people hope, a gentleman named Diefenbaker would be right at his elbow, well qualified for leadership.

From the Conservatives, if they were given power, I wouldn’t look for many changes in our international policy. They might try to arrest our growing dependence on the United States, on

whose coattails we now either move or stand still. I think they would be a little tougher with the United States when the executives of that nation treat us, as they occasionally do, like a coattail tenant rather than a sovereign neighbor. But the major changes, I think, would be internal. If the Liberals lose this election it will be at least partly because of proved carelessness (from which some voters will suspect occasional dishonesty) in such internal affairs as letting our contracts and spending our funds. Such fallings

from grace are the result of overconfidence which comes from power held so long that the source of it is believed automatically renewable— instead of power given only by us at the polls. If the Conservatives were elected and re-elected and eventually became that confident of our support, and misused it, then it would be time to throw them out too. By that time perhaps the Liberals would have rediscovered the humility which is a sure adjunct of being out of office, and would be fit again to govern. 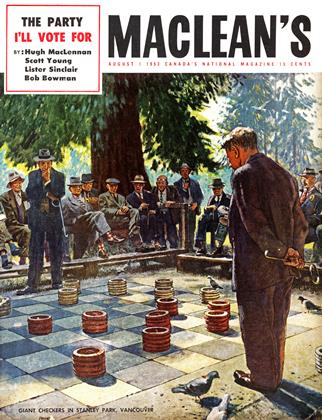