HAVE YOU ever wondered why one parliamentary speech is so much like another? I got a clue to the answer when, one morning in the dog days of midsummer, I dropped in to gaze around at the empty shelves of the Parliamentary Library.

The library is being taken apart and put together again to make it fireproof. More than half of its million volumes are stacked in five floors of the Supreme Court Building. The rest are in packing cases in the ratinfested old mill which until lately housed the Dominion Bureau of Statistics.

As a labor-saving device the University Debaters Annual ranks with the electric dishwasher and the garbage disposal unit. Its only drawback is the one I mentioned at the outset the material it supplies is the same for all speakers. However, we can’t have everything.

SPEECHES may remain the same but at least elections have changed. Politicians and voters, recovering from the campaign that ended Aug. 10, can both be grateful.

In 1867, the voting in the first general election in the new Dominion of Canada lasted not one day but six weeks about as long as the whole campaign lasts now. Professor Norman Ward of the University of Saskatchewan in his excellent book, The Canadian House of Commons, recalls that Sir John A. Macdonald and his Conservatives mapped out an election strategy of “picking the soft spots first, and working their way cautiously to the hard ones.”

In that election each province followed the electoral law it had had before Confederation, and only Nova Scotia had recjuired simultaneous voting. In the other three provinces the election moved from riding to riding as the authorities might decide.

In Quebec and Ontario, moreover, each “election day” was forty-eight hours long and the law required that the total vote be added up and published at the end of each day of voting. Thus it was possible, at half time, for the trailing party to know precisely how many votes it had to pick up the next day in order to win. When the Continued on page 62

All that is left on Parliament Hill is a reference library of fifteen thousand volumes comprising the books which members of parliament need most and take out most often. Most of them, of course, are the serried ranks of Hansard and the Revised Statutes. But I was fascinated to discover, in one still-uncleared alcove, several shelves of aids to parliamentary speechmaking.

Fifty volumes, for example, contain the speeches made before the Empire Club of Toronto ever since 1903. Speeches to the Toronto Canadian Club are preserved back to 1912. But perhaps the most useful of all to parliamentary debaters are the twenty-five or thirty volumes of the University Debaters Annual.

This valuable handbook contains a summary of all the deflating among a group of American colleges since 1923. There, in a convenient capsule, you can find both the affirmative and the negative case on every public question of the past thirty years— from Unemployment Insurance and The Legal Status of Strikes, in 1923, up to Outlawing the Communist

trailing party happened to be the party in power this gave opportunity for all sorts of drastic measures. In D’Arcy McGee’s riding, for example, there were serious riots on the second day of voting.

Ballots were also unheard-of in 1867. New Brunswick had a system which passed for secret voting—each elector wrote the name of his chosen candidate on a piece of paper and handed it to the returning officer —but there were none of the present safeguards against bribery, intimidation and fraud. In the other three provinces the elector made his choice by simple oral declaration to the returning officer.

Opposition members clamored for a secret ballot but Sir John A. Macdonald ignored them. Both simultaneous voting and the secret ballot were “unBritish,” he said. Norman Ward quotes another party man as giving a more credible and candid explanation of the government’s refusal.

“Elections cannot be carried on without money,” this unnamed person said, “and under an open system of voting you can readily ascertain whether or not the voter has deceived you.”

Bribery of voters was indeed a commonplace in those unregenerate days. One of the judges in an early contestation case asked a question which needed no answer: “Is not

In 1867, though, it was only one of several ways in which the election could be manipulated. Another was the appointment of party wheelhorses as election officials.

Section 42 of the British North America Act authorized the Macdonald Government to “cause writs to be issued by such persons, in such form, addressed to such Returning Officers” as it might think fit. It thought fit to appoint partisans so zealously loyal that some of them declared Government candidates elected who had in fact been defeated; disfranchised several counties by objecting to their voting lists for technical reasons and reinstated on the voters’ list names which had been struck off by a judge as a result of judicial proceedings. At least one returning officer was appointed on condition that he refrain from running as a candidate.

In the Eighties, under one of the early election acts, Government strategists made appointments of the opposite kind with identical motives. Election officials were not allowed to vote. Under the law any citizen who refused to serve as an election official on request could be fined ten pounds. Edward Blake, the Liberal Party leader, complained that the Conservatives deliberately appointed Liberals as poll clerks to disfranchise them, and the Liberal Party had to pay ten pounds apiece to get them back into active politics.

Canada in those days was not a democracy and had no intention of becoming one. Indeed the very word “democracy” had the same connotation among solid respectable businessmen that the word “socialism” has now. Sir John Macdonald’s correspondence, and his conversation as recorded by his biographer Sir Joseph Pope, bristle with hostile references to the “rampant democracy” of the United States which he was determined to keep out of Canada.

The franchise in Canada was limited to propertied men who had “a stake in the country.” By modern standards the required “stake” looks small enough to include practically everybody—males who owned, occupied or rented real property assessed at three hundred dollars or worth thirty a year could vote in the cities and towns of Quebec and Ontario. The rules in other provinces differed only slightly. In fact, however, even this rather coarse screen was enough to exclude a large fraction of Canadians from the voters’ list.

Norman Ward made sample computations of several counties in each of the four original provinces, and on the basis of that sample projected the following table for individual ridings in 1867:

APPARENTLY the only thing that hasn’t changed very much is the political campaign. Contemporary accounts of 1867 sound very like 1953.

Sir George Ross, whose book, Getting Into Parliament And After, is one of the most amusing of our political memoirs, recalls the campaign of 1867 as “a compote of Dominion and local issues, both very indefinite and more speculative than real.”

Apparently the Macdonald Government and its adherents had illusions of Divine Right, too. Sir William McDougall, the ex-Liberal who had remained in the Macdonald cabinet after the breakup of the Confederation coalition, argued in young George Ross’ hearing that it was a duty to the Queen to support this government she had appointed. He was speaking in the Ontario riding of Alexander Mackenzie, later to be the first Liberal prime minister of Canada, and he went so far as to suggest that Mackenzie was “disloyal” in opposing the Queen’s government.

Ross tells how Mackenzie, in his rasping Scottish burr, replied to this foul imputation and laid his enemy low:

The failure to treat with prescribed veneration The Simonized surface of man s transportation. 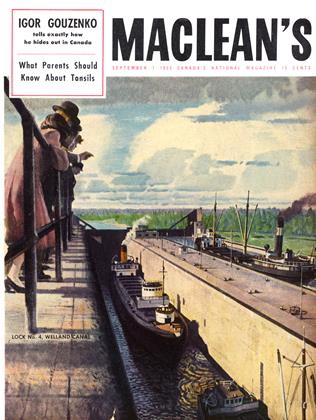