hunting Cary Grant has to choose between a U. S. war prisoners clown it up in Stalag 17.

brisk career girl (Deborah Kerr) and an exotic Middle East princess (Betta St. John) in a romantic farce that is arch and overdrawn.

GENEVIEVE: A fast and ¡oily comedy from Britain. The title role is played by a 1904 automobile, one of many participating in the annual^ London-to-Brighton rally for ancient cars. Some of it is repetitive, but the genial yarn stays in high gear from start to finish.

MAN ON A TIGHTROPE: The efforts of Czech circus.owner Fredric arch and his discontented wife (Gloria Grahame) to escape through the Iron Curtain are the basis of an intelligent thriller.

THE MOON IS BLUE: Denounced in some quarters as “immor-

ality, this one strikes me as being just a mild, talkative little comedy for adults — and, on the whole, pretty good fun. William Holden and David Niven both make passes at Maggie McNamara, but virtue remains triumphant.

THE 7 DEADLY SINS: A French-ltalian multi-story film, much too

long and sharply uneven in quality, but with at least two episodes (Gluttony and Pride) that may pleasurably haunt your memory. Michèle Morgan is outstanding in the large cast.

SHANE: Director George Stevens and writer A. B. Guthrie Jr. have fashioned one of the best of all the Hollywood westerns, although the plot (mysterious stranger helps honest settlers defeat greedy cattle baron) is as old as its magnificent Technicolor hills. With Alan Ladd, Van Heflin, Jean Arthur, Brandon de Wilde.

STALAG 17: A raucous, cynical but compelling comedy-drama about the life led by American soldiers in a German prison camp in 1944. Not recommended for the kiddies.

and a heart-of-gold rogue (Robert Mitchum) join forces in a hackneyed jungle mellerdrammer, made tolerable by superb Congo photography.

A Queen Is Crowned: The Coronation in Technicolor. Excellent. 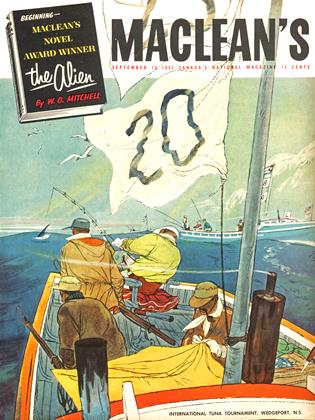