IN VANCOUVER a woman was fined one hundred dollars and had her license suspended for three years. The reason:

The church announcements in a small-town paper in Manitoba carried two separate advertisements. Readers were invited by the Presbyterian minister to “Come and Worship in our Newly Decorated Church;” while immediately beneath, the United Church minister observed (in his text for the week; that, “Whitewashing the Pump will not Purify the Water.”

When a brother and sister of the Willows family married a sister and brother of the Morris family in Perth County, Ont., twenty years ago, they started a custom of giving their children the mother’s maiden name as a Christian name. The result: Morris Willows’ mother is sister to Willow Morris’ father; Willow

Kids in Perth, Ont., going home from their music lessons have been getting a certain satisfaction from a hand-lettered sign in a boarding house window: Violin Taught. Special Pains Given Beginners.

A Nelson, B.C., motorist filling up his car at a service station noticed ? smirk on the face of the attendant and asked him what the big joke was.

“I want to congratulate you,” was the reply. “You’re the last person to

be served with gas at the old price.”

The motorist glowed with that old bargain-basement feeling until the attendant added: “It goes down five cents a gallon from now on.”

Red-faced Oakalla Prison Farm officials in Vancouver admitted they released a man who had served only 233 days of a 729-day sentence. “The handwriting on his card was not too clear,” the warden said, explaining that the man handling releases had misread a date, allowing the prisoner his freedom a year before it was due. The surprised inmate didn’t correct the mistake.

During a trivial brush with the provincial police not long ago a Chatham, Ont., man who was picked up on the highway was asked to prove his identity. Without the slightest hesitation the man reached into his mouth, pulled out his upper plate and showed the police his name, etched on the roof of the dentures.

An enterprising insurance man in Abbotsford, B.C., is equal to any situation. After an oil truck parked two blocks away slipped its brake, rolled across two busy streets, and pushed his one-story real estate and insurance office back several feet he put up a new sign: 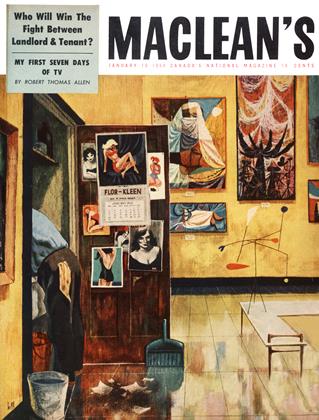