department of civilized light entertainment, this long but unlagging romantic comedy is a highly enjoyable entry. Based on a Broadway stage hit, it’s a chromium-plated modernization of the Cinderella plot.

The principals include a chauffeur’s daughter (Audrey Hepburn), a millionaire playboy (William Holden),

and the latter’s businesslike older

brother (Humphrey Bogart), all of whom are in fine fettle.

A BULLET IS WAITING: A vengeful sheriff (Stephen McNally) and his prisoner (Rory Calhoun) plod through a lot of woolly drama on Jean Simmons’ sheep ranch. Excellent outdoor photography.

THE CAINE MUTINY: Although toned down in comparison with the book and the play, Herman Wouk’s seagoing drama is still a compelling thing in Stanley Kramer’s Hollywood production. In the satisfying cast are Humphrey Bogart (as the complicated Captain Queeg), Van Johnson, Fred MacMurray, Jose Ferrer.

AN INSPECTOR CALLS: Not even the adroit Alastair Sim, in a noncomedy role as a mysterious investigator, can overcome the sluggish pace and contrived coincidences of this social-conscience drama, adapted from a J. B. Priestley play.

REAR WINDOW: Suspense-czar Alfred Hitchcock’s latest is his best in years. It’s a funny, earthy chiller about a well-intentioned Peeping Tom (James Stewart) who begins to suspect that a hideous murder has just been committed by an apartment neighbor. Grace Kelly, as our man’s ardent Park Avenue sweetie, adds to the total pleasures.

Bad for Each Other: Drama. Poor.

You Know What Sailors Are: British 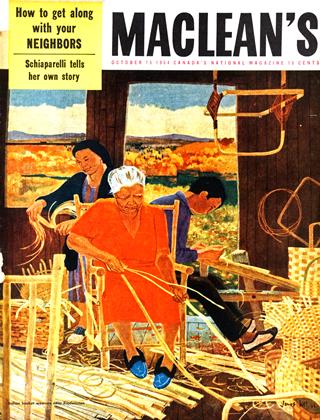