BROKEN LANCE: The rock-jawed old cattle baron with the rebellious sons is an overly familiar figure in Hollywood westerns, but Spencer Tracy makes him a vividly alive individual in this well-acted outdoor drama. Katy Jurado as his Indian wife and Richard Widmark as the most resentful of his brood are also outstanding. The camera work, in improved widescreen CinemaScope, is handsome.

DEMETRIUS AND THE GLADIATORS: Sex, sanctity and spectacle are shrewdly mingled in this whopping sequel to The Robe. Victor Mature, a Christian gladiator, defends his virtue against a pagan temptress (Susan Hayward) and wins an extremely close decision. DRIVE A CROOKED ROAD: Mickey Rooney—completely rid, for once, of his Andy Hardy mannerisms—is an honest mechanic who falls in with bank robbers and a dame. Surprisingly good, and recommended.

FATHER BROWN, DETECTIVE: G. K. Chesterton's priestly sleuth becomes another superb characterization by Alec Guinness. A leisurely and civilized comedy-drama from Britain. Peter Finch as a super-thief, Cecil Parker as an urbane bishop, are eminent in the cast.

MAGNIFICENT OBSESSION: No use arguing about this one; every customer evidently considers it either a profound inspirational drama or a rather maudlin soap opera about the golden rule My own view leans to the latter persuasion, although I admit most of this Lloyd C. Douglas story is quite decently handled. With Jane Wyman, Rock Hudson.

THE RAINBOW JACKET: A smooth but superficial British comedydrama of race-track life. Robert Morley stirs some chuckles as a iardy horseman, misfortune’s chum.

SALT OF THE EARTH: All the bosses are monsters and all the workers heroes in this candidly pro-labor, anti-capital drama about a z.nc-m.ne strike in New Mexico. As a piece of union-hall propaganda, it is well done.

WEST OF ZANZIBAR: Civilization’s bad effects on primitive Africans are shown, clearly but far from excitingly, in this sequel to Ivory Hunter. Fine on-the-spot jungle photography.

A Bullet Is Waiting: Western, fair.

On the Waterfront: Drama. Excellent. The Pickwick Papers: Comedy. Good. Princess of the Nile: Drama. Fair.

Secret of the Incas: Drama. Fair. 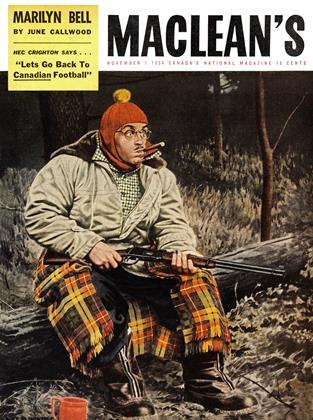