SUDDENLY: A solid little suspense thriller about an attempt to assassinate the President of the United States in a sleepy California town named Suddenly. Some of the characters are rather thinly imagined but Frank Sinatra as the chief killer proves again (as he did last year in From Here to Eternity) that he doesn’t need to sing to keep his name in lights.

DRAGNET: Television’s Jack Webb, under his own fast-paced direction, effectively but rather monotonously portrays the bleak and brutal plain-clothes man Joe Friday in this Hollywood whodunit.

THE EGYPTIAN: Passion and piety in the Pharaoh-way sands of Mika Waltari’s best-seller novel. On the screen, in wall-to-wall CinemaScope, the result is frequently an imposing spectacle but the prevailing tempo is awfully slow. With Edmund Purdom, Jean Simmons, Victor Mature, and thousands of helpers.

THE FRENCH LINE: Jane Russell as a Texas oil heiress, Arthur Hunnicutt as her garrulous guardian and Gilbert Roland as her “French” boulevardier, in a hollow farce-with-music. It’s a tasteless job but fairly funny in spots.

HER TWELVE MEN: Greer Garson’s ever-loyal fans are a society in which I happen to be a bit behind in my dues. I was tempted to let my membership lapse altogether while sitting through this contrived comedy-romance about a schoolteacher and the small boys under her wing. With Robert Ryan, Richard Haydn.

SUSAN SLEPT HERE: Hollywood pictures, I still doggedly maintain, are slowly improving on the average, but I couldn't clinch the argument by citing the present specimen. It’s a coy, leering and overdrawn comedy about a sexy-but-nice teen-ager (Debbie Reynolds) and a bachelor twice her age (Dick Powell).

Doctor in the House: Comedy. Fair.

The Gambler from Natchez: Drama.

The High and the Mighty: Drama. Fair.

Sait of the Earth: Labor drama. Fair. Scotch on the Rocks: Comedy. Fair. Secret of the Incas: Drama. Fair. 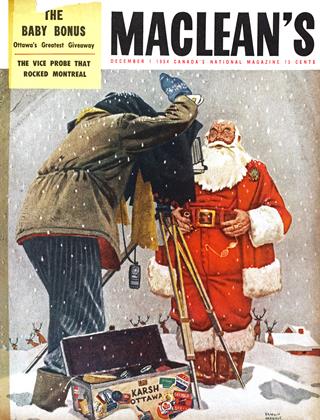