Click to View Article Pages
SELECTS THE Movies for Christmas

RUDOLPH, the Red Nosed Reindeer, will be guiding Santa Claus around the Canadian movie theatres again this Christmas and, unless the feature film on the program is one of those labeled “Poor” at the bottom of this column, the perennial Rudolph short will probably be best for the kids during the holiday season.

HOLLYWOOD’S current White Christmas, with Danny Kaye and Bing Crosby, is less charming to look at than its title sounds, but Kaye is still

ROMEO AND JULIET: ____Director Renato Castellani’s Anglo-ltalian production of Shakespeare’s romantic tragedy is a glowing and affecting film, so lovely to behold that its visual glories ought to appease the Shakespearean purists who will grumble over some of the scissorings of the text. Laurence Harvey and Susan Shentall are the stars, but the finest acting is by Flora Robson (as the Nurse) and Mervyn Johns (as the Friar).

BEAU BRUMMELL: In spite of the rigors of a deathbed finale which I feared would never end, this handsome comedy-drama about England’s renowned 18th-century dude has a lot in it that can be solidly enjoyed. Stewart Granger as Brummell, Robert Morley as the crazed George III, Peter Ustinov as the plump

on view in Knock On Wood, a fine festive comedy for the entire family.

A CHRISTMAS CAROL is back too, with Alastair Sim as the oppressive Scrooge in an overdrawn but entertaining British version of the Dickens classic.

and pathetic Prince of Wales are prominent in the generally able cast.

BRIGADOON: A lavish but disappointing

screen version of the delightful Broadway musical-fantasy. Some of the best songs have been left out, and much of the original charm and gaiety along with them. Gene Kelly and Van Johnson are the Yanks who stumble into a spellbound Scottish village, and Cyd Charisse is the semi-spectral lassie who captures Kelly's heart.

LITTLE FUGITIVE: A slender but enchanting tale about a seven-year-old New Yorker (Richie Andrusco) who “escapes’’ to Coney Island and has a wonderful time trying to forget that he has “killed” his older brother. Highly recommended.

OPERATION MANHUNT: A competent little suspense thriller, with a few Canadians in the cast, about a fictitious aftermath to the reallife case of Igor Gouzenko, the Russian code clerk whose disclosures in 1945 helped the Mounties crack a Soviet spy ring.

WOMAN’S WORLD: Three married couples are put under caustic observation by automobileczar Clifton Webb while he is deciding which husband will become general manager. A brittle, sometimes disquieting comedy-drama in CinemaScope, benefited by some superb shots of Manhattan and a fair number of waspish wisecracks.

The High and the Mighty: Drama.

King Richard and the Crusaders:

On the Waterfront: Drama. Excellent. Phantom of Rue Morgue: Horror. 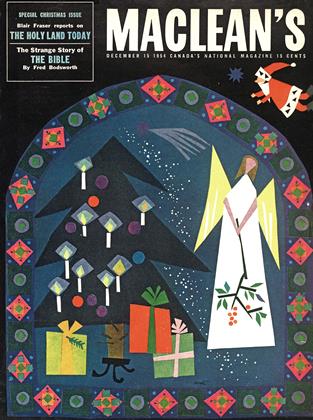