SOME HONORS COME later in life than others and, therefore I was gently touched the other day when two letters arrived from Harbordn Collegiate Institute, Toronto. One was from a young

lady as head of the alumni association and the other was from the principal, supporting her request. All that she asked for were some memories of the three years that I spent in that emporium of learning. Apparently the alumni has a quarterly or annual publication which in touch with those who have enjoyed a Harbord education.

I at once decided to accede to the request but fifty years make a long road for memory to travel. I was twelve years old when I passed my entrance examination and fifteen when I left Harhord as a finished product. Yet those years remain surprisingly vivid. It is far easier to remember them than the same lengt h of time in the 1920s or 1930s.

The principal of Harbord was Mr. Spotton, a little man of much earnestness and considerable dignity. My brother had gone there before me and so had one of my younger aunts and a female cousin. “We look to you for big things,” said principal Spotton. “The others were very good students.”

Because of the modest marks I had scored in the entrance examination I was put in the lowest form of my year. There was an equal number of boys and girls and almost at once I was greatly struck with the curls of Shirley Newcombe. I ask her pardon for thus publicizing her but, on the other hand, her name has undoubtedly been merged since then in the nomenclature of marriage.

There were some striking personalities among the teachers. We feared and liked Tommy Strath, our arithmetic teacher. He often smoked a pencil and was beautifully sardonic on occasion. That pencil fascinated me. He would place it in his mouth, inhale its rich fragrance and even tap the imaginary ashes with his little finger. Unhappily the science of arithmetic interested me much less. Like algebra and Euclid it was a closed book that never opened for me more than its first few pages.

There was another teacher named Carstairs who, being somewhat flamboyant in his dress, achieved an effect of untidy elegance which added much to the drab setting of t he schoolroom. I think he taught us Latin but I would not take my oath on that.

Latin fascinated me from the very first day that we were presented with mensa, mensae and all the rest of the conjugations which could concern so mundane a thing as a table. Latin is so satisfying, so reliable, so fundamental. It was the only subject in which I excelled and, although memory can be an awful liar, I think I was the head of the class in it.

Education is a tremendous subject and we owe eternal gratitude to the teachers who strive so hard to impart its secret to the young. Yet looking back nearly half a century I wonder if they did not cram too much into our heads and if the cramming was as skilfully done as might have been the case.

Quite rightly we were taught English history and duly learned that there had been three Richards, four Georges and seven Edwards on the English throne. What earthly use was there in learning when a king reigned unless we were told what happened to the country during the period?

It is possible that we were taught about the industrial revolution that altered the whole character of England and changed the face of the world, but I doubt it. Probably we were better informed on the glory of the sixteenth century because of the Armada but I still think

that a nation’s story cannot be made up of kings and wars.

Undoubtedly we learned in due course that Wolfe captured Quebec from the French although he would rather have written Gray’s Elegy. But were we given the history of Canada with its gradual progression from colonial to dominion status? My memory is that, broadly speaking, Canada was not on the curriculum.

Educational experts might retort with some logic that it does not matter much what boys and girls learn at school providing they go through the process of learning. Youngsters in the junior forms at high-school age have not found their feet nor their direction. The faithful faculty must go on training their minds in the hope that the boys and girls will find what interests them most and where they can excel. In crowded classrooms, it is impossible to concentrate? on each scholar. Inevitably the brighter ones are discovered although later in life they may be passed in the race by some who were the sluggards and dullards.

There have undoubtedly been great advances in the science of teaching and when next I visit Canada I shall report to the principal at Harbord and ask permission to attend some of the classes providing 1 am not asked any technical questions. Yet one wonders if there are not some subjects which need an entirely new approach.

Take French for example and French is an official language in Canada. How many Canadian highschool scholars can speak French when they leave? Perhaps there are a large number but it was not so in my time. We were taught all about French irregular verbs. We were taught that some words were masculine and others feminine. We were taught everything except how to make conversation in French.

In 1946 amid the ruins of Berlin I visited a girls’ school. A perfect Brunnhilde of a woman was going to take the “English hour’’ with pupils averaging from thirteen to fifteen. In that entire hour not one word of German was spoken.

“Spik Anglisch!” boomed Brunnhilde, “Always you spik Anglisch!” It was not elegant English we heard nor was it always grammatical but it was understandable to British ears. And the improvement at the end of the hour was simply phenomenal.

In my Canadian tour last summer I met an old wartime friend who is now the principal of a beautifully modern high school. The gymnasium was a dream, the assembly hall magnificent and the library impressive. “Are you still teaching irregular French verbs?”

I asked. Sadly he nodded his head. “I’m afraid so,” he said.

Now let us consider the matter of elocution which has to do with enunciation and voice production. Of all living creatures only man was given the power of speech even if the monkey and the parrot may make false claims. To a man as well as a woman an attractive voice is an asset beyond pearls.

No one would try to be a singer without studying the physical processes by which a tone is created in the larynx, passes through the open throat, gathers color and depth in the air cavities of the head, gains resonance on the bridge of the nose and the hard palate and has words imposed on it by the lips as it leaves the mouth. The only difference between singing and speaking is that the tone is more sustained by the singer.

English is the richest and most beautiful of all languages. Shakespeare is acted in many tongues but it is only in English that his full glory can be achieved. “Speak,” said Dr. Johnson to a new acquaintance, “so that I may know what you are.”

Canadians do not have to wend their way through a myriad of accents like the British. Canadians should have the richest voices in the world, but like singers they would have to start young. Undoubtedly at Harbord in my time we were made to read aloud but without any real attempt at voice production. Perhaps the science of speech is more advanced in the Canadian schools of today.

To return to Harbord Collegiate let me make the abject confession that I was no good at anything except Latin and literature. Euclid remained a complete blank but the versatility of x in algebra roused a passing interest in my breast. When it came to arithmetic I found that like Stephen Leacock I had a morbid curiosity as to why A ran faster than B while C was slower still.

There were no laurels for me in any direction. 1 tried for the rugby squad and ended up as spare man on Harbord’s third team which was as low as one could go. My envy of the boy who played centre half on the first team was so great that I would have given my very hope of eternity to be in his place. Obviously one’s ego becomes hungry at an early age.

Let me be perfectly frank: under any system of education I would have been an inglorious example to my fellow scholars. I was beginning to find even then that whether it was in music or writing or speaking I could only learn by teaching myself. It is a tribute to the Harbord faculty of that period that Í left there at the age of fifteen with no sense of frustration or failure. A system that could achieve something positive out of so disappointing a pupil as myself must have had much to recommend it.

In spite of my father’s righteous wrath—which was tempered by his kindliness l did not attempt to write my matriculation. I wanted to get a job and earn some money. For better or worse I chose the university of practical experience rather than the cloisters and the campus.

THOSE YEARS from twelve to fifteen are more important and impressionable than we are apt to think. At Harbord Collegiate I learned that the female is an important part of the human race; I learned to reach school on time in spite of a congenital leaning toward unpunctuality; I was taught many things by teachers of both sexes who gave of their very best.

Ahead of us was the vast adventure of the New World with Canada as the Eldorado drawing the ambitious, the visionaries and the misfits of the Old World. Many times I would go down to the Union Station in Toronto and watch the CPR emigrant trains pause on their way to the distant prairies of the west. Their passengers had come from Holland, Germany, Britain and the Ukraine. I wondered if in the years ahead I would ever have a chance to see Europe or even the Canadian prairies. The world was so big in those days.

How could we know that in Sarajevo there was a boy named Princip, a boy who used to steal out at night and listen to Serbians talking rebellion against Austria? How could we know that in 1914 young Princip would fire a pistol shot that would send hundreds of thousands of men into uniform, tumbling dynasties into the dust, and calling on youth in every country to march the dusty road to death.

That was one thing that Harbord did not and could not teach us, because we threatened no one and Britain guarded us against the lust of lesser breeds. Today in Harbord Collegiate there must be a memorial of its honored dead in two world wars.

But because of the discipline of those formulative years, because of the esprit de corps of schooldays, and perhaps because we were taught to think, we were better soldiers when our generation had to face the challenge of destiny. ★ 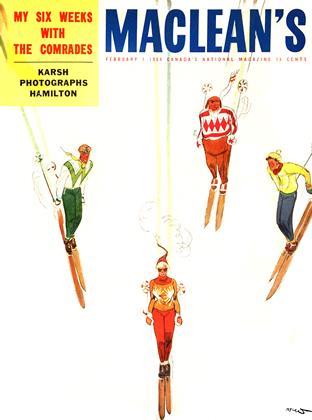