AS HIS FINAL selection in this second series of picture essays on Canadian cities, Yousuf Karsh chose the twin Lakehead communities of Fort William and Port Arthur at the head of the great, inland water system that bores into the very heart of the continent. Through these two ports pours a ceaseless stream of ore and grain, pulp, paper and fish. The photos on these pages illustrate why, in more ways than one, the cities at the head of the lakes are at the core of the realm. Traditionally, Port Arthur and Fort William are bitter rivals but Karsh, after a lively fishing trip with both the chamber of commerce presidents (John Andrews of Fort William and F. H. Black of Port Arthur), found them the best of neighbors and privately decided that the rivalry was useful mainly for publicity purposes. The Lakehead people, he felt, have “some of the reserve of the east, and the openhandedness of the west” while living right at the very centre.

THE ARCHITECTURE of the Lakehead is determined to a great extent by the fact that three hundred million bushels of prairie grain pour through the twin cities every year. In its passage from rail to water the grain is stored in dozens of giant elevators whose total capacity is a staggering eighty-eight million bushels. (Fort William has a somewhat greater elevator capacity than Port Arthur.) The grain elevator, like the log cabin, is one of Canada’s few triumphs in native architecture and Karsh has long been fascinated by its sleek and formal beauty which he succeeded in photographing from several intriguing angles. “I treat grain elevators just like cathedrals,” Karsh reverently declares.

A huge Finnish labor force makes the most of Lakehead s

BOTH LAKEHEAD CITIES are marked by two strong racial minorities which contrifc>ute to the economy and the culture of the area. In Fort William it’s Ukrainians; in Port Arthur, Finns. Karsh estimates there are some ten thousand Finns in and around the Lakehead, mainly in the lumbering and fishing industries, as shown in these photographs. To get these pictures Karsh journeyed for a radius of ninety miles around lioth towns, into the rocky wooded Lake Superior country so familiar to transcontinental train passengers. The first snow of the year was fresh on the ground and Karsh tried to persuade one ageing Finn to indulge in the traditional steam bath and roll in the snow. But the old man shook his head and declined the offer: “I’m too old for that now,” he said sadly.

THE HUGE MACHINE at right is seldom still, hut Yousuf Karsh managed to catch it in repose during a two-hour repair period one Sunday at lunch. With such equipment, the Great Lakes Paper Co. is able to produce a hundred and fifty-five thousand tons of newsprint a year in a continuous operation from pulp to finished sheet. Finer papers, like Mac lean’s stock, are produced here and at other plants, 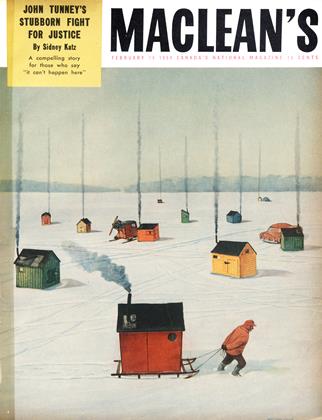