CALAMITY JANE: Doris Day and Howard Keel in a Wild West musical comedy that is only phonily western, hardly ever comical, and only mildly musical.

A DAY TO REMEMBER: A charming mademoiselle named Odile Versois does more than her share in brightening up this harmless but hackneyed British comedy. It’s about some English dart players who enjoy a one-day outing in ze naughty France.

KISS ME KATE: Cole Porter’s Broadway musical (via Shakespeare) has been toned down for the screen, but the songs are as wonderful as ever.

SO BIG: Jane Wyman’s intelligent acting helps somewhat in galvanizing Hollywood’s third filming of Edna Ferber’s mother-love saga. She's a valiant farmwife who wants her boy to be an architect.

TROUBLE IN STORE: The corn is piled high in this British department-store romp, but it offers the promising debut of Norman Wisdom, a sad little clown who is sometimes a very funny gent. THE WILD ONE: A violent, frightening and quite distasteful melodrama about a gang of hoodlum cyclists (led by Marlon Brando) who terrorize a sleepy town. Some of the acting is excellent.

All the Brothers were Valiant: Drama ashore and afloat. Fair.

Folly to be Wise: Comedy. Fair.

It Should Happen To You: Satirical comedy. Excellent.

A Lion is in the Streets: Drama. Fair. Little Boy Lost: Drama. Good.

The Moon Is Blue: Comedy. Good.

The Sea Around Us: Actuality. Fair. Shane: Western. Excellent.

Those Redheads from Seattle: Yukon 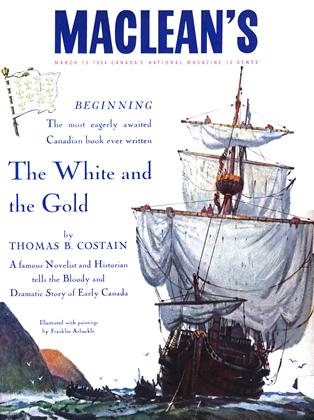