THE BIG HEAT: One of the best in Hollywood’s current spate of realistic crime dramas. Among the principals are an honest policeman (Glenn Ford), a good-hearted shady lady (Gloria Grahame) and a gangster (Lee Marvin) who tortures his girl friends.

THE FALL OF BERLIN: A 1949 Russian war film now making the rounds here. It offers an all-wise, all-gentle Stalin, a gross toadlike Churchill, an absurd boymeets-girlskl love story, and some magnificent battle scenes.

HONDO:, Not as good as Shane, which it resembles, but still a better-than-average western —• in the best 3-D yet exhibited. Frontier gunman John Wayne, bonny farm wife Geraldine Page and a passel of Apaches are brought together by Fate.

MADE IN HEAVEN: A seductive Hungarian housemaid (Sonja Ziemann) wreaks havoc in an English family in this genial but rather heavy-handed comedy from Britain.

THE MAN BETWEEN: East-versus-West intrigue in divided Berlin is the background for director Carol Reed's new picture, starring James Mason as a cryptic German who is ruefully working for the Russians. Claire Bloom Is a sheltered English girl who falls In love with him. Not as fascinating as The Third Man, but with enough of Reed’s sorcery to make it well worth seeing.

MISS SADIE THOMPSON: Rita Hayworth, who seems intent on whitewashing all the bad girls in literature, appears this time as Somerset Maugham’s tropical slattern, with José Ferrer as the pious reformer who becomes ensnared by her. Not for me, thanks.

THE SINNER: Another sexy number though not nearly so spicy as the ballyhoo surrounding It. I find it a dullish German melodrama (with dubbed-in English dialogue), starring Hildegarde Neff as a gal of uneasy virtue, In love with a blind artist.

All the Brothers Were Valiant: Drama ashore and afloat. Fair.

Folly To Be Wise: Comedy. Fair.

A Lion is in the Streets: Drama. Fair. Little Boy Lost: Drama. Good.

The Moon Is Blue: Comedy. Good.

The Sea Around Us: Actuality.' Fair. Shane: Western. Excellent.

Those Redheads From Seattle: Yukon

Wild One: Drama. Fair for adults. Wings of the Hawk: Western. Fair. 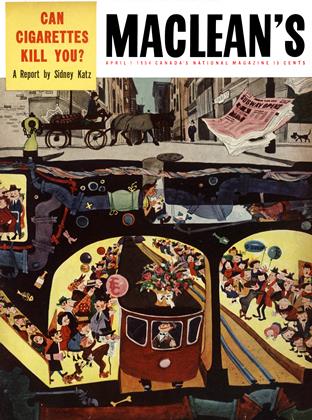