ADD TO THE Four Freedoms: the Canadian Automobile Association told the Government last month that, “the modern car is part of the Canadian way of life, with Canadians convinced that owning a motor vehicle is a basic right.”

WHILE the parliamentary committee on capital and corporal punishment starts work with considerable fanfare, another body is plugging away quietly at a somewhat similar task. This is the informal committee set up last November to advise the Minister of Justice on a system of granting remission of penitentiary sentences.

Remissions policy is the last item to be tackled, in the quiet cleanup of t he Canadian penal system which has been going on since the war. Under Commissioner R. A. Gibson and his former deputy Joseph McCulley ( now warden of Hart House at the University of Toronto) the emphasis in penitentiaries has been shifted from punishment to rehabilitation. By segregating young first offenders from hardened criminals and generally by treating prisoners as human beings the new regime in the Penitentiaries Branch has effected some remarkable “cures.”

But a cure won’t stick unless there’s some way of getting the reformed man out of prison within a reasonable time. When he’s been there long enough to feel the error of his ways, and when no more gain can be expected from confining him, the effect of keeping him in for years longer may only be that the whole effort of rehabilitation is wasted. Instead of improving further and becoming a useful citizen, he breaks

down in discouragement and goes back to what he was before.

So it’s important to have flexible, well-co-ordinated machinery for letting such men out. Until lately this has been a missing link in the Canadian penal system.

Remissions more than 1,200 in an average year are granted by the Governor-General on the advice of the Solicitor-General. In practice the advice normally comes from a civil servant, the director of the Remissions Branch in the Justice Department. Up to last year this official was M. F. Gallagher who had small sympathy with the new program of the Penitentiaries Branch and whose attitude toward his own job was one of extreme caution, to say the least.

It was in his time, though against his advice, that ticket-of-leave was given to Red Ryan, a notorious bandit who committed a murder during an armed robbery before his ticket-of-leave expired. Perhaps because of this never-forgotten case, the policy of the Remissions Branch remained pretty rigid and unyielding for nearly twenty years.

Gallagher retired at the end of 1952. His successor is A. J. MacLeod, a young man whose personal relations with the Penitentiaries Branch and such welfare organizations as the John Howard Society are excellent. But all concerned now feel that this is not enough, that the time has come for a major overhaul of the whole system of granting remissions. This is why the advisory committee was appointed six months ago.

It’s a very well-balanced group of men. The chairman is Mr. Justice Gerald Fauteux, who before he became a Continued on pape 105

judge served many years as crown prosecutor in Montreal. Another member is William B. Common, director of prosecutions in Ontario. Thus the committee is amply supplied with experience in sending criminals to prison. For experience in getting them out again at the right time, the committee has Joseph McCulley, former deputy commissioner of penitentiaries, and J. Alex Edmison, of Queen’s University, who for years worked full-time with the John Howard Society for prisoners’ aid and welfare.

They have been meeting about once a month ever since they were appointed. So far, much of their work has been simply to learn each other’s point of view and experience, but they intend during the next few months to visit Canadian penitentiaries. They may have a report ready this fall, ready for the next session of parliament. But they are determined not to hurry— they all think a good report next year would be better than a hasty one this year.

Here are some of the questions they must answer:

Should Canada have an automaticparole system by which every prisoner’s case would be considered at a fixed time, whether he applied for remission or not? At present he is never considered unless he applies, which tends to favor the man who knows the ropes and the man who has active friends. One convict’s wife writes a six-page letter to the Remissions Branch every week; when that man’s application comes up, his file will be a foot thick. Another man, equally deserving of parole, might have no file at all.

Should we change the present rule that a man must serve at least half his term in prison, and two thirds of it if his crime involved violence, before he is considered for remission? Many people think the rule too rigid, especially in dealing with long sentences. Some judges tend to give “exemplary” sentences, others to be lenient; thus one man might receive double the sentence imposed on another man for the same offense. Under the present rule he can’t even apply for remission until he’s been in prison as long as the luckier convict’s full term.

On the other hand, should a federal authority try to impose uniformity in prison sentences across Canada? In Vancouver, where drug peddling is a serious and urgent problem, peddlers and addicts get much longer sentences than they do in eastern cities where the drug traffic is relatively minor.

All these questions lead up to the most important one of all:

Should Canada have a federal Parole Board—or, as some committee members would prefer to call it, a Rehabilitation Board—to deal with the whole problem? This would be a quasijudicial body outside the government service which could act as a kind of human court of appeal, an agency to review not the legality and justice of the verdict but the propriety and

The demand for copies to fill new orders Is so great that we cannot guarantee the mailing of even a single issue beyond the period covered by your subscription. To a'0 , disappointment, your renewal order should be mailed to us promptly when >ou receive the “expiration” notice.

the usefulness of a man’s sentence.

It would not be necessary to give final power to such a board. The elected and responsible Solicitor-General could still advise the Governor-General as he does now. But instead of taking the recommendation of one of his officials, he’d have the counsel of a qualified group which itself would have had the benefit of discussion.

WITH THE spring breakup and the opening of the fishing season, Canada and the United States face a problem of joint law enforcement in the lake-andforest country along the OntarioMinnesota border, west of Lake Superior. The problem is to prevent U. S. aircraft from using Canadian waters to frustrate United States conservation laws.

Superior National Forest on the U. S. side and Quetico Provincial Park on the Canadian side comprise four thousand square miles of wilderness, almost empty and almost untouched, which both countries recognize as a rare national heritage. It’s the old explorers’ route from the great lakes to the great plains, left by an accident of history just as it was when the discoverers first saw it.

To keep the forest as it is the U. S. not only made Superior National Forest a roadless area but also forbade aircraft to land on any of its hundreds of lakes. There are a few tourist resorts still maintained on the few fragments of land remaining in private hands; they fought this U. S. regulation all the way up to the Supreme Court, but the law was upheld. Since last summer it has been illegal to fly fishing parties or supplies for tourist resorts into the QueticoSuperior country on the United States side.

Canada, however, has passed no such law. Aircraft may still land on Canadian lakes—American as well as Canadian planes. It is not only possible but quite legal for U. S. resort owners to fly their customers and supplies to the Canadian side of the border, pick them up in small boats and take them back to the United States.

Reports have reached Ottawa that this traffic has, in fact, been going on all winter—that resort owners have been using ski-equipped planes to bring in next season’s supplies via Canada. It’s rumored that they intend, this summer, to build at their own expense a U. S. customs station at Crooked Lake, where customers and supplies reentering the United States can do so with a minimum of inconvenience.

These operations are carried on by permission of the Canadian Air Transport Board, which issues taxi permits to U. S. fliers with the same liberality that the U. S. Civil Aeronautics Board shows toward Canadians. However, the Air Transport Board has no intention or desire to be used as a tool for the evasion of United States law. Air Transport Board officials say that if evidence can be produced to show that these Canadian permits are being used in order to do something which is illegal in the United States the board will take action at once.

It’s considering sending in an inspector to obtain such evidence. What it won’t do, though, is simply cancel the permits in order to preserve the Canadian share of this great international asset. The federal Department of Transport feels that conservation is a provincial matter, and that it ought not to exercise federal authority to invade a provincial field. If the Government of Ontario should decide that Quetico Provincial Park needs this protection, then the way would be open to an international agreement on the subject which has been drafted but neglected for several years. + 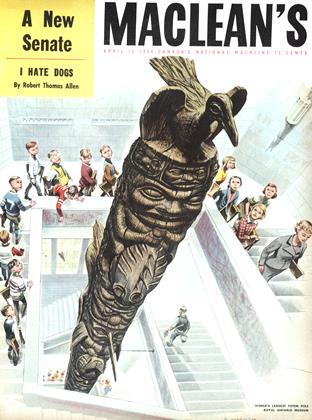