have been by his new provincial income tax. They can’t understand why he deliberately went out of his way to infuriate Quebec taxpayers by double taxation when he could have got almost as much money (if not just as much) without double taxation at all.

Duplessis could have taxed all Quebecers up to five percent of the amount they pay in federal income tax without costing any of them a cent more than they pay now. Under existing law they could have deducted the whole of a five percent provincial tax from their payment to the federal Government.

Instead Duplessis imposed a fifteen percent tax with a different exemption level $1,500 instead of $1,000 for a single man, $3,000 instead of $2,000 for a married man. By thus imposing a much higher rate of taxation on a smaller number of taxpayers, Duplessis says he will collect $22 millions.

Ottawa tax experts doubt it. They think this is a considerable overestimate of the gross return Duplessis will get from Quebecers who earn $3,000 and up. Also, they point out, the gross return will be a good deal more than the net return. Duplessis will have to set up a fairly elaborate and expensive provincial machinery to collect the tax. Since his exemption levels are different he will not be able to use the federal Government’s records he will have to make his own lists of taxpayers, and do his own policing.

What with one thing and another, therefore, Ottawa tax officials think Duplessis will be doing well to net

$15 millions from the new tax. Tht happens to be exactly the amount h could have got by a fully deductibk five percent tax on the federal exemption base. Quebec’s contribution tc federal income-tax revenue for last year is about $300 millions; five percent of that is $15 millions.

Moreover it would have cost him almost nothing to collect a five percent deductible tax. Ottawa would not actually collect it for him (a similar request from Ontario was refused several years ago) but Ottawa would have provided a lot of expensive information without charge and made Quebec’s collection job both easy and cheap.

Why, then, did Duplessis choose such a costly, cumbersome and politically risky course in order to get approximately the same amount of money?

But far from clearing up the puzzle, this answer merely deepens it. Why did Duplessis deliberately pick a fight with Ottawa that he could not possibly win, instead of picking one in which victory was not only possible but probable?

Had he pitched his new provincial income tax at seven percent instead of fifteen, and had he stuck to the federal Continued on page 85

Government’s exemption levels, Duplessis would have had an excellent chance of having his cake and eating it too.

For one thing he would have been sure of getting the full amount that he says he needs—seven percent of $300 millions is $21 millions, a greater net return than even the most optimistic Quebec tax collector would guarantee from the present Duplessis tax. But a more important consideration, politically, is that he would either have forced Ottawa to give way or left the federal Liberals in a very Scroogelike role.

Ottawa had already raised from five to seven percent the amount of provincial corporation tax which may he deducted from the federal levy. It would have been politically difficult to refuse the poor individual taxpayer the same consideration already granted to rich and soulless corporations.

Thus a seven percent provincial income tax would have given Duplessis excellent fighting ground, and a betterthan-even chance to score a major triumph over Ottawa by forcing a change in federal tax policy.

TO DEMAND a deduction of fifteen percent, however, was to demand the impossible—as Duplessis must have known. Ontario could do so much better with a fifteen percent tax of her own than with the present tax-rental agreement that no Ontario government, Liberal or Conservative, could afford to remain in the agreement on those terms. The same would be true in lesser

degree of other better-off provinces. The whole structure of federal-provincial tax agreements would collapse and the poorer provinces would be back in the desperate financial straits from which tax rentals have rescued them.

Evidently, then, Duplessis has launched an attack on the very principle of federal-provincial tax agreements. But the still unanswered question is “Why?” And particularly, why now?

Double taxation seems a poor plank for an election-campaign platform, even if Duplessis had to have an election this year (which he doesn’t—his present government is only two years old). It’s true the Quebec double taxation will be paid by few if any of the farmers who are Duplessis’ strongest supporters but the rural districts will not be completely exempt. In every village there will be a few people—the notary, the general merchant—who will have to pay double income tax.

However, there are many things in Quebec politics which matter more than money, and the chief of these is provincial autonomy. If Duplessis actually succeeds in blowing this tax question up into an issue of autonomy, and persuades the Quebec people to regard it as such, he will then be deployed on his favorite fighting ground.

To some Ottawa observers the whole incident proves that the autonomy issue means more than votes in Duplessis’ eyes. They suspect he is raising the issue to build up his own personal prestige among the French-Canadian nationalists.

And so the tax issue, they think, is just another Duplessis challenge to St. Laurent’s title as Quebec leader.

Some of them also think that this time Duplessis has gone too far. All Quebecers want their provincial autonomy properly respected and safeguarded. It does not follow that Quebecers want the province to take precedence over the nation, as Duplessis’ claim to a tax priority would imply.

Certainly this is the reaction among English-speaking citizens of Quebec. Finance Minister Abbott is MP for Westmount, the wealthy English-speaking suburb of Montreal. Probably he has as high a percentage of voters affected by Duplessis’ double taxation as any MP in all Quebec. His mail on the subject has been heavy but it has been four to one in favor of standing firm against Duplessis’ demands that the whole fifteen percent be made deductible.

“Stick to your guns, Doug,” one elector said. “I don’t like paying double taxation, but dammit, is this a country we’ve got here or just a League of Nations?”

Except for a few timorous ones, the Quebec MPs are prepared to take the same stand and fight Duplessis on the ground he has chosen. But some of them do feel the challenge should be accepted fully, and fought out in the open, as was the Duplessis challenge of 1939 when he fought a provincial election on the issue of participation in World War II. All Quebec’s federal ministers, led by the great Ernest Lapointe, plunged into the fray and staked their seats on the outcome— Lapointe declared they would all resign if Duplessis won the election.

Some Quebec MPs feel that Prime Minister St. Laurent should meet this challenge in the same fashion. ★ 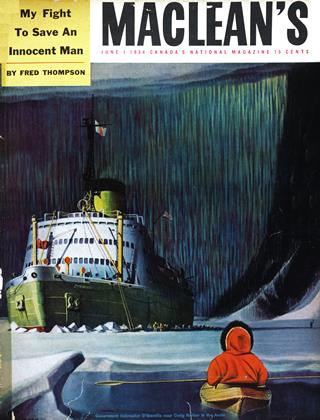