I feel constrained to thank the good Lord that someone with some literary standing has at last voiced an opinion on the important question of making heroes out of traitors. Your editorial (Why All This Hero Worship for Reformed Communists?, June 1) is to the point.

If the time comes when it will be advantageous to turn traitor to their new adoption, don’t think they won’t do it. It is not that they have suddenly found the path of honesty. Chambers must have made a lot of money out of his apostasy, and apparently Gouzenko aims to do likewise . . .

Perhaps the profession of converted spy will rank high in ethical standards, with the added security that seems to go with it; and, if we are to accept these men as laudable heroes, the profession may soon be overcrowded and human dignity will cease to be the measure of acceptability. J. Albert Johnson, Victoria.

• Your editorials are usually pertinent, timely and thought-provoking. . . However, the one on the hero worship accorded to ex-Communists is a cut above the usual. Let’s hope it receives the attention it merits.—D. Gray, Regina.

• ... The editorial was courageous because these are perilous times in many respects. All that seems needed for publicity and success today is a background of reformed alcoholism, Communism, Nazism, etc. I for one would like to feel sure that our RCMP makes sure that reformed Soviet Communist citizens are not super spies before they are given sanctuary in our country.

Also, I would like to ask artist Duncan Macpherson if the large number of Dutch settlers we have acquired in the past few years have made it necessary to sail the D’Iberville under the Netherlands ensign (Cover, June 1). With the Canadian Red Ensign on the jack staff and the Netherlands ensign on the gaff the ship’s nationality is very confusing . . .—Deryck Adamson, Lt.-Cdr., RCN. (R.) Ret’d, Toronto.

D'Iberville, being French in name and Canadian in being, I thought it equitable to use both the Jack and Tricolor as symbolism. Rut by somehow running the red,

white and blue laterally instead of per-

pendicularly I depicted the flag of the Netherlands rather than the Tricolor / intended.”

Margaret K. Zieman in writing, The Story Behind the Real Uncle Tom (June 1), must have been low on literary fare when she whipped up the sketch and served it on a Dresden plate. If the account itself contains as many inaccuracies as the impression she creates of the townspeople of Dresden, Ont., then she owes her readers a whopping apology. Having ministered within the Dresden area for a number of years, I venture to say that the inter-racial relationships of long standing there arc as cordial as any which might have been practiced by the writer herself had she been a Dresden resident.—The Rev. F. R. Anderson, Montreal.

The Lowdown on Nelson’s Column

Might I correct the statement made by McKenzie Porter in Twenty-Four Hours in the Old Quarter (of Montreal), May 1, that my great-grandfather Edward Hodges Baily was ‘‘the architect” of the Trafalgar Square, London, Nelson Column and as such copied the previously constructed Montreal monument. W. Railton was architect of the column. Landseer was sculptor of the lions. PL H. Baily was the sculptor who did the figure of Nelson on the column, and to say that such famous artists copied the previous work of others is ridiculous.—Maude Baily Milner, Edmonton.

• Ina reference to Joe Beef, the eccentric barkeeper of a former generation, Porter states that when his funeral was over a military band fulfilled his last request. Outside the tavern they played for his widow, The Girl 1 Left Behind Me.

Friends who professed to know of this incident, particularly the late Arthur Racey, Montreal’s famous cartoonist, claim it took place not at Joe’s funeral, but following that of his first wife. I have also been told that Joe was much surprised to learn that this performance was supposed to be in keeping with his unconventional nat ure, and that he meant no disrespect to his wife, whose sister, by the way, he afterward married . . .—Andrew Paterson, Montreal, if 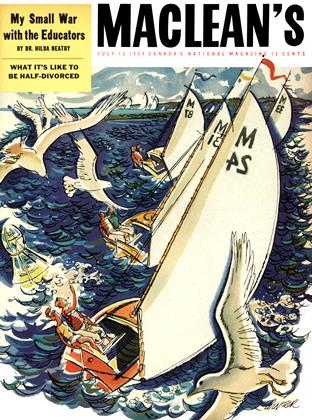