THE LONG WAIT: A murder mystery, based on one of Mickey Spillane's blood-andlust novels. Anthony Quinn does as well as possible in the “hero’’ role, but the plot is fantastically involved and the odd camera angles are often more arty than Pollui Doleful Danny Kaye is wonderful in

BAIT: Yet another in writer-

director-actor Hugo Haas’ tedious explorations of sex. The primal urge and its violent consequences are exemplified here by an eccentric prospector, his mantrap of a wife, and his naive mining partner.

THE DIAMOND QUEEN: Unintentionally farcical in tone, this is a pulp-fiction adventure yarn about two French blades (Fernando Lamas and Gilbert Roland) who go gem hunting in India and meet a gorgeous jungle ruler (Arlene Dahl).

HELL BELOW ZERO. Alan Ladd joins a British whaling fleet to investigate the murder of his ladylove’s father in the Antarctic. The ensuing events are full of routine heroics, but excellent Technicolor camerawork and some interesting documentary stuff on whaling help to pass the time.

THE RELUCTANT CASANOVA: A hearty British farce, a bit too strenuous in spots, about a dull bank clerk (George Cole) who enters a hypnotic trance and becomes an exuberant wolf. Alan Badel as the hypnotist and James Hayter as a doddering physician are very funny.

THE STRATFORD ADVENTURE: A top-notch featurette about Canada’s Shakespeare Festival.

TAZA, SON OF COCHISE A noble Apache prince (Rock Hudson) has a lot of trouble keeping the peace in the badlands. An average western, beautifully photographed.

The Beggar’s Opera: Musical. Good. Beneath the 12-Mile Reef: Cinema-

The Command: Cavalry vs. Injuns ;n

King of the Khyber Rifles: Drama in

Ma and Pa Kettle at Home: Farm farce. Good of its type.

River of No Return: Western. Fair. 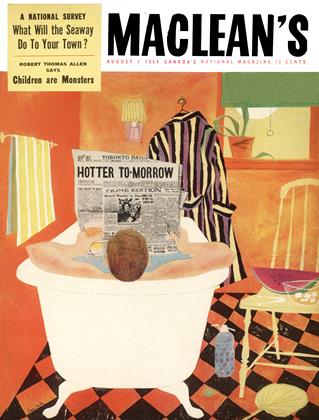