IT WAS a beautiful summer evening and the terrace of the House of Commons seemed far more attractive than the debating chamber where we had been niggling and nagging each other over what was left of the finance bill.

I find it difficult to describe the peculiar magic of the Thames when the sun begins to set. The buildings on the south bank are lit up as if by footlights, and even the chugging tugs drawing huge barges toward Westminster Bridge seem manned by adventurers rather than by ordinary fellows looking forward to a pint at the pub, a talk with the missus, and bed.

I had intended to walk a few paces on the terrace and then return to the debate, but on a bench I found my old friend Walter Elliot and I could not resist his rich Scottish appeal. For nearly 19 years we have sat together in the Commons, he representing a Scottish seat and I a London borough, and in all that time I have never found him anything but original, amusing, vastly cultured and deeply philosophical. His story is a strange one.

As a young Scot he was educated at Glasgow Academy and Glasgow University. Then came that catastrophic interrupter of human

destinies — the 1914-1918 war. Elliot was a man of letters, a philosopher, a budding orator, a dreamer with a lot of practical knowledge, but seemed in no sense a man of action. Heredity, environment and personality all marked him out for an academic career spent in the cloistered temples of knowledge. Instead, he went to France as a second lieutenant with a Highland infantry battalion.

In a fierce engagement with the Germans he won the Military Cross. He rose in rank and won a bar to his M.C. When the war ended he was a colonel but he returned to his studies as if he had been spending a rather long period abroad studying history and architecture. No one could have looked less like a fire-eating soldier.

Like all good Scots he eventually reached London and, having seen the metropolis, he decided (like so many good Scots) that London was good enough for him. So he went back to Scotland, married a Scottish girl, got himself adopted as a Tory for a tough parliamentary seat and entered parliament in the famous 1918 victory election of Lloyd George.

It was a mad parliament with Lloyd George dominating the scene like a conquering Caesar. U. S. President Woodrow Wilson was preaching the gospel of something to be called the League of Nations, while Congress was insisting that Britain must repay the loans granted by the U. S. before Germany forced her into the war in 1917.

It was all so beautifully simple. Lloyd George, who had displayed genius as a war leader, decided that the crushed and impoverished Germany would pay for the cost of the war, and that the Allies could then repay America for the years that she was the benevolent money lender.

The thirty-year-old Walter Elliot looked at the postwar tragicomedy and wondered if the world had gone mad. While he watched and pondered the situation an Austrian corporal named Hitler was mooning about Vienna, painting ridiculous pictures, living with tramps in doss houses and dreaming dangerous dreams.

By 1922 the Tory Party had had enough of Lloyd George’s coalition. They planned a rebellion, chose Canadian-born Bonar Law as their leader and drove Lloyd George and the Liberals into the wilderness from which they were never to return.

By that time Walter Elliot, like young Anthony Eden, was being groomed for office. But there the parallel ended. The dazzling Eden was obviously destined for high places whereas the slogging Scottish Elliot looked as if he would be a perpetual junior minister.

Yet he had been hailed as a future prime minister. Alas! He got no further than minister of agriculture. By that time I had entered parliament and was not greatly impressed by Elliot’s performance although I liked him very much. He was too courteous, too logical, too humorous, too analytical and too lacking in sex appeal—or whatever its political equivalent might he.

He held various ministerial posts including parliamentary secretary to the treasury and under-secretary for his native Scotland but ultimately he was sent to the suicide post of minister of agriculture. I gave him my congratulations at the time but had I been more experienced I would have known that in a country like England, where the farmer is always sacrificed to the industrialist, the minister of agriculture is doomed before he starts. The wonder is that there are always men ready to take on the task.

In World War II Elliot ceased to hold office and joined the War Office as a general in charge of a new-fangled thing called public relations. Quite frankly he was not very good. In fact he was terrible. What he did not know about the weird art of public relations would have filled many columns in the press. When the Hitler war ended in 1945 Walter had become one of a dozen former future prime ministers. He was out for good, never to return as a minister to the front bench.

Now let us come down to today. Walter Elliot, now 66, sits on a gangway seat as a private member. He could have had a knighthood, a baronetcy or a peerage merely for the asking. But he has instead a CH—Companion of Honor—which is only given to the very few who achieve great distinction in the realm of the arts, philosophy or politics.

There is, perhaps, no other institution in the world so critical, so physic, so quarrelsome and so fair as the British House of Commons. A nudist can no more hide his warts from his fellow nudists than a British MP can hide his real self from his fellow members. They take their time in assessing each other. They allow for mistakes of temperament, they allow for failure, and they even excuse bores who are sincere.

Then suddenly the House decides what you are and it is seldom wrong. Thus when Churchill formed his government in 1951 and left Elliot out, the House watched him take his seat on the gangway among the rank and file of MPs and suddenly it realized that this ministerial castoff was a great man whose presence in the chamber added dignity to us all.

His was a mind too vast to he confined to any one ministerial task. Here was a visionary with a delightful humor, a scholar without pedantry, an historian who refused to be submerged in the past because he realized that each day makes history as it passes down the winding stream of time.

N'>r was his mind fixed merely on politics and history. He was a connoisseur of the arts and I cannot think how often we have dined together in the Commons when the menu was Voltaire, Shaw, Shakespeare and even Burns. To emphasize a point he would often quote long passages from Hamlet or Coriolanus in a rich Scottish burr which was as incongruous as it was fascinating.

Therefore we shall now return to the terrace. I sat down beside him and in a few minutes we were in deep discussion as to whether there would be another warand, if so, what it would be like.

“Certainly there will be wars and wars,” said Elliot benevolently. “You must remember, my dear fellow, that men delight in war. It uproots them from their daily tasks, it takes them to new scenes and other countries, it provides uncertainty and danger instead of routine. It also creates a monastic life in which women play a part only when the warrior is on leave. Where were you on Armistice Day in 1913?”

I told him that I was with the Canadians at Seaford Camp.

“Ah!” said Elliot. “Then you would have heard all the ships in New Haven Haibor blowing their sirens at 11 o’clock. Now tell me; is it not true that it gave you a curious emptyfeeling? It did to me. The unknown terrors of peace confronted us after years of simple out-of-door life in the war.

“The problem of peace is how to give men the adventure they crave without landing them in prison or the divorce court. Women understand this instinctively but try to convince themselves that it isn’t true. Now take Scotland: for a great number of years the Scots in the glens used to makeraids and cut each other up. There were fierce small battles and everybody was happy. There were clan feuds and all that, sort of thing, and they got a great kick out. of it. Then the strong arm of authority stepped in and made it a penal offense to cut up your neighbor. And that was the beginning of the t ragic emigration from Scotland.

“The problem, of course, is how to supply the element of danger to normal life. Everybody who can afford it should ride a horse as often as possible. The horse is the stupidest of all animals and among the most dangerous. It will shv at a shadow when any idiot would know that there was nothing to shy about.

“Of course, young fellows can play rigger which gives them a chance to break their necks, and there is always Switzerland where you can break your legs on skis. These are commendable pursuits although they cannot equal t he lure of war.”

My old friend paused. As if thr debating chamber had waited for this moment the division bells rang, the police bellowed “DIVI—SHUN,” as if determined to make the Thames tremble.

“I^et us do our duty,” said Elliot, the ex-soldier, with the MC and bar, the ex-minister, the ex-rector of Aberdeen University and Glasgow University, Freeman of tbe City of Edinburgh and Companion of Honor. Whatever you may think of his philosophy I hope you wili agree with me that he deserves one more title—“the Good Companion.” 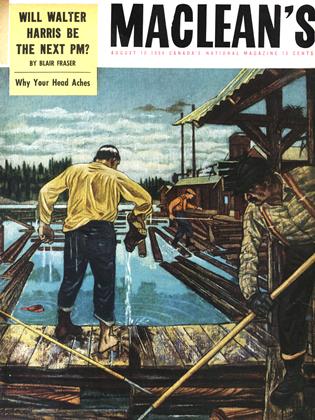